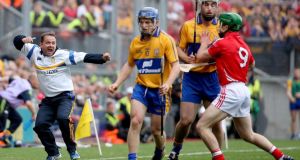 If there had been any doubt about the ability of the All-Ireland hurling final to deliver an appropriate climax to what had already been a remarkable season, it was dispelled by the final whistle.

A second successive drawn final was one claim to distinction but more eye-poppingly than that was how close Cork came to winning an All-Ireland after being dominated for virtually the entire match and only taking the lead with less than a minute on the clock.

In the time remaining Luke O’Farrell hustled a line ball off Clare goalkeeper Patrick Kelly and with the sands running into the bottom of the hourglass, Stephen Moylan appeared to have executed that great staple of Gaelic games: the wide that’s as good as a point.

Referee Brian Gavin allowed his discretion free rein however and in the extra 30 seconds or so there was time for corner back Domhnall O’Donovan to land a fittingly spectacular equaliser.

The theft of a match wouldn’t have been the only issue Clare would have had with the one-point defeat. Cork full back Shane O’Neill should have walked in the 17th minute for striking Darach Honan with his hurl; instead both players were enigmatically yellow carded.

Controversies
There were other controversies – eg another example of the game’s unflaggingly useless “advantage” protocols, which saw David McInerney waved on after getting a whack on the hand and then whistled up for over-carrying, which ended in a pointed free for Cork – but Clare had so much of the match that it’s difficult to credit even now that they didn’t end the afternoon as comfortable winners of their fourth All-Ireland.

The contest never really even got as far as tactics. Clare were set up in comparatively orthodox fashion and were so dominant that there was no urgency on Patrick Donnellan’s role as sweeper.

Conor Ryan had a storming match at centre back but his colleagues in the half-back line Brendan Bugler and Patrick O’Connor plucked down ball at will and only Séamus Harnedy of the starting Cork half forwards put up any resistance.

Inside, Patrick Horgan’s frees were a lifeline for Jimmy Barry-Murphy’s team but the forwards managed just two points from play in the first half.

Clare’s attack was more sprightly and threatening and five of them had scored from play before half-time plus Colin Ryan’s free taking was as unerring as Horgan’s. John Conlon, around whom injury speculation had swirled, had his best match of the championship and Pádraic Collins continued his phenomenal form of late, this time from a slightly more advanced position.He ended the day with three points from play and winning at least that number of converted frees.

Honan wasn’t as menacing as he’d been when the teams last met and was well marshalled by O’Neill but Conor McGrath was lively and Cork would have been pleased to see him off for two points.

Cork, looking nervous and maladroit nearly throughout, survived by dint of cashing in nearly everything: riding their luck at the back, as the defence battled gamely enough to cope with a match that was strictly a one-way street.

Brian Murphy, back for the first time in nearly three months, struggled to reprise his marking job on Tony Kelly from the Munster semi-final but he settled as the match wore on and even hit a rare point in the first half.

Economical
Maybe the forwards just weren’t getting sufficient ball but Cork were skinflint-economical with their shooting – the first wide not arriving until first-half injury-time when goalkeeper Anthony Nash sent a long-range free wide.

Nash had gone for goal from a 20-metre free in the 18th minute with Cork trailing by just one.Having looped the ball in the air, he strode forward for maximum effect and almost met his out-rushing opposite number half-way to the goal. Kelly blocked and Collins pointed a lightning counter-attack. Someone obviously told the referee, who warned the Clare ’keeper when a similar situation arose in the second half.

If any of their supporters were expecting the sort of resurgence that won the Munster semi-final, they were disappointed, as Clare clipped on two points on the resumption, from Kelly and a Ryan free.

Arid summer
Two things would save Cork: Clare blinked a little – Ryan was wide with two frees and their wides total exceeded the opposition’s – and their opponents, after an arid summer with the green flag, helped themselves to three. Each of the goals inched them a little closer without necessarily undermining Clare’s underlying superiority.

Conor Lehane produced a long-awaited moment of brilliance in the 40th minute. He got on the ball in the middle of the field, struck out to the right, accelerated down the wing and cut in to fire a shot into the net, 1-10 to 0-14.

Clare simply kicked on, capitalising on Cork’s errors and re-building a four-point lead going into the final quarter.

The next claw-back came in the 57th minute with Clare five ahead. Luke O’Farrell was taken down and this time Nash nailed the 20-metre free – 2-13 to 0-21 – and minutes later he was back up for a penalty when Harnedy was fouled.

This time Colin Ryan, back from wing forward, blocked the shot and a minute later was firing over a free. His namesake Conor hurtled through the air to take a high ball and point from half way; suddenly there were four points in it.

The final act of recovery came when Patrick Cronin, having switched in and out with Horgan for much of the afternoon, was on hand in the 64th minute to take a ball from sub Stephen Moylan. He still had work to but turned and shot to the net to equalise 3-14 to 0-23.

There was already a sense that the old “Cork is Cork” voodoo was working its dark magic and although they didn’t win, the fact that they weren’t beaten out the gate was a strong demonstration of its potency.