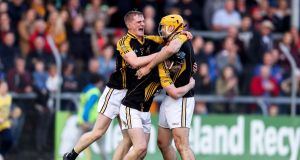 Tony Kelly celebrating at the end of the game with Gary Brennan and Pearse Lillis. Photograph: Inpho

There’s a new name on the Canon Hamilton Cup, the Clare Senior hurling championship trophy. Ballyea made history on Sunday in front of 5,058 fans at Cusack Park Ennis outplaying Clonlara by one goal in their replay.

After a rather disappointing drawn final two weeks earlier, this was a much more entertaining affair. Ballyea hit the ground running and lead by 1-4 to 0-1 after just 11 minutes of play.

Clonlara, who were trying to banish the memory of last year’s decider defeat to Sixmilebridge, and bridge a gap of eight years without a title - were left playing catch up from early on.

While Nicky O’Connell, from a long range free got Clonlara’s opener.

Brennan was then played in for a goal chance but Ger O’Connell in the Clonlara goal parried over for a point. A Tony Kelly ‘65 put three between the teams before full-forward Brennan eventually did find the target and raised a green flag.

Clonlara brought it back to a three point game before Ballyea struck again. This time it was man-of-the-match Niall Deasy who hit the net. Ballyea went in 2-5 to 0-8 ahead at the break.

Early in the second half Clonlara grabbed a goal through team-captain and full-forward John Conlon - that score drew them level on 2-9 to 1-12. The sides were level on two further occasions but significantly Ballyea held on having led throughout.

In the tight and tense closing stages Ballyea held sway and three late points by Deasy from a free, and a score apiece from play by substitute Damien Burke, and talisman Tony Kelly was enough to make history for Ballyea.

The newly crowned Clare champions will now have to prepare to face the challenge of Tipperary champions Thurles Sarsfields in the Munster Club competition, next weekend.