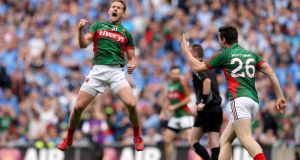 Andy Moran celebrates scoring a late equalising point for his side to forace a replay in the All-Ireland senior football championship semi-final between Dublin and Mayo. Photo: Ryan Byrne/INPHO

A weird and tumultuous occasion ended up being rewound to the start, as Mayo produced an incandescent last 10 minutes – not so much a comeback as the 13th labour of Hercules – to peg back Dublin and ensure that the obsessive All-Ireland dream remains a reality, for another six days at least.

Driven by the dread of yet another championship to be filed in the ‘nearly’ catalogue they appeared to erupt in defiance and did enough to earn a replay.

A frenzied assault on the scoreboard yielded 1-4 without reply in the closing 10 minutes – the key goal coming from a 69th-minute penalty when Colm Boyle’s driving run into the Dublin square was ended by a posse of defenders and referee Joe McQuillan swooped in, arms outstretched.

Cillian O’Connor was calmness incarnate in shooting home the dead-ball kick – as indeed he had been all afternoon in a flawless display of free taking.

For Dublin the quest gradually morphed into a nightmare.

Having apparently fulfilled the pre-match consensus by scoring a second goal followed by a fusillade of points around the hour mark, they looked like they had decided to free-wheel home and if the ensuing crash didn’t write off their championship aspirations completely it has left the Leinster champions damaged.

Not alone are there question marks over the team’s ability to react to crisis points, a year after the Donegal meltdown, but a disastrous lack of discipline has cost them a litany of liabilities from black cards issued to their two most experienced centrefielders and a 1-9 concession from frees to the likely loss of Diarmuid Connolly, who was red-carded at the end for striking, and potentially a similar suspension for Philip McMahon, should the CCCC decide to investigate an alleged head-butt on Aidan O’Shea some minutes after half-time. 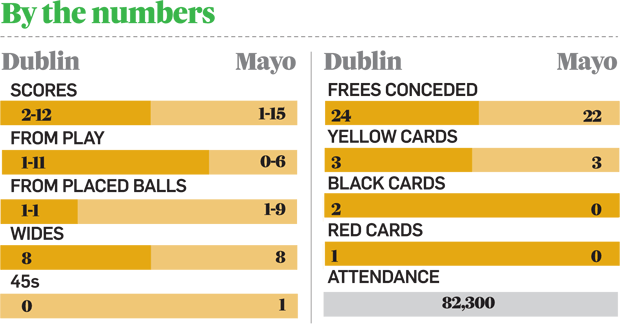 Then there was the worryingly nervy display by captain Stephen Cluxton. He was so jittery on the closing minutes, as Mayo swarmed forward that he firstly coughed up a chance for Andy Moran to score one of his usual goals against Dublin but John Small took the ball off the line.

Secondly his kick-out after O’Connor’s penalty goal was misplaced and Mayo picked it off with Andy Moran finishing a quick bout of passing to equalise.

The match started with the usual round of alterations to the announced teams. Mayo brought in Rob Hennelly for goalkeeper David Clarke, who hadn’t recovered from an abductor injury, and debutant David Drake for Barry Moran, whose role as sweeper against Donegal had been so effective.

Dublin as expected started Michael Darragh Macauley in place of Denis Bastick at centrefield but for all the energy, the team’s middle pairing looked a little short of sharpness with Brian Fenton turning over possession three times in the first half whereas Macauley was uncharacteristically yielding in contact and lost a couple of possessions.

Mayo were on the board without Dublin touching the ball after 55 seconds of retained possession. Worse followed for the Leinster champions, as full back Rory O’Carroll, a key operative in the battle to keep Mayo’s in-form full forward Aidan O’Shea in check had to leave the field after three minute with a black eye and lacerations requiring a reported 10 stitches. Mayo defender Donal Vaughan didn’t last 10 minutes either, injuring his shoulder.

Dublin earned an early penalty when Paul Flynn, who was their s most impressive player dropping back as defensive cover, catching high ball and picking out passes, powered in on goal and was brought down when kicking. Connolly drilled home the kick.

When they were moving well, Dublin looked irresistible, shooting good points from Paddy Andrews, Bernard Brogan and Ciarán Kilkenny who had a big first half, reprising the three points from play scored in his debut, also against Mayo three years ago.

Discipline was a problem, not just in the concession of frees but in having two of them brought forward for easier dispatch by O’Connor. Somehow the rearranged full-back line kept out O’Shea under the high ball although Mayo felt they should have had a penalty just after half an hour when three defenders surrounded him.

Having maintained a steady three- and four-point lead throughout the first 35 minutes, Dublin led by a goal at the break, 1-7 to 0-7 but looked more comfortable than that.

The second half started however with greater urgency from Mayo. Tom Parsons’s mobility had been a feature of the centrefield exchanges and Diarmuid O’Connor’s work-rate was both striking and constructive and he and his brother Cillian tacked on early scores.

Dublin replaced Dean Rock at half-time and his free-taking would be missed although he had missed the only chance he had in a first half of disciplined Mayo defending.

His replacement Kevin McManamon had a big impact though, scoring Dublin’s first point of the half and then apparently crucially the goal in the 58th minute – after a slicing run by Jack McCaffrey, who Dublin failed to get on the ball as much as they would have liked and a pass to Brian Fenton whose shot was blocked – when he tapped in a loose ball.

Points from both Brogans – Alan had come on for the final quarter – and another from McCaffrey looked like it had seen Dublin home but it was only the prologue to the real drama.