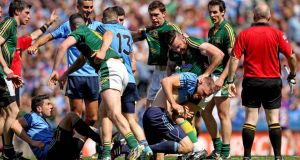 The GAA have called an end to the alleged biting affair that emerged after Sunday’s Leinster football final at Croke Park. No further investigation will take place, and with that no charges made against any player.

It was ultimately up to the GAA’s Central Competitions Control Committee (CCCC) to decide on the conduct of any investigation – following Sunday’s allegation from Meath manager Mick O’Dowd that one of his players, later identified as Mickey Burke, had his finger bitten towards the end of the 16-point hammering by Dublin.

Burke did later receive medical treatment, and was also taken to hospital on Sunday evening for precautionary injections, as part of the required protocol in such cases.

It is also understood that match referee Pádraig Hughes of Armagh did make some reference to the incident in his match report, outlining that Burke had alleged he had been bitten during the minor fracas that broke out between the teams in the 63rd minute.

However, the CCCC have now decided against pursuing any further investigation due to insufficient evidence. Neither county, although invited to make submissions, were agreeable to pursuing the affair any further, and particularly Meath, as they turn their attention to their All-Ireland qualifier against Armagh, back in Croke Park, on Saturday week.

The GAA don’t formally comment on disciplinary issues, individual or otherwise, and while there was some video and photographic evidence which suggested Burke’s finger did make contact with the face of Dublin forward Eoghan O’Gara, it was far from conclusive, particularly when suggesting that contact involved any biting. Photographic evidence alone is not admissible in disciplinary cases.

O’Dowd had claimed he was “extremely disappointed” by the incident, when having initially conducted a dispassionate analysis of his team’s 16-point defeat, he returned to the Croke Park press conference room to specifically report the alleged biting.

Later, Dublin manager Jim Gavin denied any knowledge of it, and the Dublin county board also declined to make any formal comment.

It was, however, the third allegation of biting made against Dublin during Gavin’s term. In April 2013, Kevin O’Brien was investigated by the CCCC, which recommended a three-match suspension.

Having exercised his right to a hearing, O’Brien was cleared as the infraction was deemed unproven by the Central Hearings Committee, after Donegal player Patrick McBrearty declined to attend the hearing.

The outcome of that affair was severely criticised by GAA director general Paraic Duffy in this year’s annual report, which he described as “a disgusting and shocking incident in itself” but “what is just as reprehensible is that no one could be held to account for what happened”.

The CCCC, he added, investigated the matter as thoroughly as possible “but was greatly hindered by the absence of video and other evidence”.

Then, last January, Dublin’s Jason Whelan was suspended for eight weeks (match bans not becoming universal until this year’s annual Congress) after accepting a recommended suspension from the Leinster Council CCC following an incident in this year’s O’Byrne Cup match against DCU.

What the CCCC have confirmed, meanwhile, is that Sunday’s All-Ireland hurling quarter-final double-bill remains firmly fixed for Semple Stadium in Thurles, despite a late request from the Wexford county board to have the games played in Croke Park, or played over successive days, due to their concerns of a limited stand ticket allocation for their game against Limerick (2.0), which is followed by Dublin against Tipperary (4.0).

“The CCCC wrote to the Wexford county board this morning (Tuesday), articulating that the games could not be changed at this stage, that it would be completely impractical,” explained Fergal McGill, the GAA director of games administration and player welfare. “And in any case, at that point in time, there were approximately 15,000 tickets still unsold.”

The GAA also claim that an estimated 8,000 stand tickets have been purchased by Wexford supporters, despite the suggestion by the Wexford county board that their allocation was about 2,000. And while the full capacity at Semple Stadium is 53,000, that was reduced to just over 46,000 for Sunday.

“That capacity was set at just over 46,000 in fitting with the quarter-final fixtures,” said McGill. “In the last 10 years, we haven’t had an attendance at an All-Ireland hurling quarter-final in excess of 45,000. We’d be thrilled if it was a sell-out on Sunday, and it may well be. But there are still a significant number of tickets still not sold.”

In the meantime, the Wexford county board have indicated they will be putting “an unlimited number of terrace tickets on sale” from today.