Donaghmore/Ashbourne denied in a tight battle, their first county final since 1943 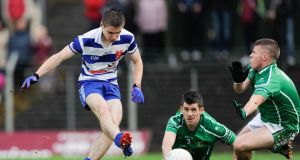 Navan O’Mahonys recovered from letting in two goals in the opening three minutes to claim the Meath title for the 19th time in a thrilling final at Páirc Tailteann.

Donaghmore/Ashbourne,appearing in their first final since 1943, got off to the dream start with Bryan Menton and Andrew Tormey finding the net. Within 90 seconds Menton took a pass from Tormey to fire past David Quirke, who was making his first SFC start because of an injury to Marcus Brennan.

A minute later Quirke was picking the ball out of the net again after another swift attack resulted in Dublin under-21 star Michael Deegan being the provider for Tormey.

However, O’Mahonys held their nerve and worked their way back into the game and were on level terms (0-8 to 2-2) at the break. Their opponents only added two more points, both from Tormey, in the remainder of the first half.

Well-taken points from Stephen Bray and Jake Regan added to their confidence and scores from David Bray and Alan Forde late in the first period completed the comeback.

Although Deegan managed to regain the lead for Donaghmore/Ashbourne soon after the restart, Ruairi O Coileain put O’Mahonys in front for the first time when finding the net on 35 minutes.

At the start of the final quarter O Coileain turned provider. After his shot was stopped, Regan was on hand to poke home. With Gary O’Brien adding a point, the score was 2-10 to 2-4 after 51 minutes.

O’Mahonys looked to be winners at that stage but Donaghmore/Ashbourne hit the next five points. But the Navan men, who had to play without injured Kevin Reilly, were let off the hook by two misses. They then broke upfield to seal the win with Regan’s fourth converted free.