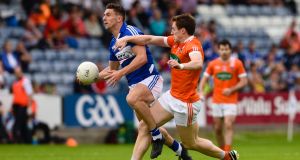 Laois’ Colm Begley is challenged by and Charlie Vernon of Armagh during the All-Ireland SFC Round 1A Qualifier at O’Moore Park in Portlaoise. Photograph: Tom Beary/Inpho

Laois squared the record with Armagh at O’Moore Park on Saturday as they sent the Ulster side crashing out of the All-Ireland Championship.

The two sides only other championship meeting came 13 years ago, when Kieran McGeeney captained an Armagh side to an All-Ireland quarter-final success on the way to defeat to Tyrone in that year’s final.

The pressure will now mount on McGeeney after Armagh crashed out in front of a crowd of less than 1,000, visiting fans outnumbering locals by four to one.

Laois opened the scoring from a free by Paul Cahillane and Armagh equalised through defender Mark Shields, who went off injured 10 minutes later in a big loss to the Ulster side.

Two in a row from Rory Grugan and Stefan Campbell saw the visitors in front but only briefly as Conor Meredith raced through the Armagh defence and from 20 metres blasted the game’s only goal in the 15th minute.

Armagh fought back and after a number of exchanges Michael McKenna kicked the equaliser in the 32nd minute and at the interval the scoreboard read 0-7 to 1-4.

Laois looked hungrier on the return and two more points from frees by captain Donie Kingston and a third by David Conway pushed the home team three clear. The second half was 20 minutes old before Michael McKenna kicked the first Armagh point.

Gary Walsh came on a sub and his first touch saw him split the posts from a free 50 metres out. Armagh sub Joe Feeney and Rory Grugan hit back with a brace but another Laois sub Jamie Farrell kicked a superb point for the home team.

Armagh threw the kitchen sink at the home team but they stood firm and with the last kick of the hard-fought encounter Ross Munnelly landed the insurance point after man of the match Brendan Quigley had been dismissed on a black card two minutes earlier.