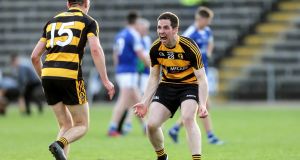 The ‘lough weren’t flattered by their winning margin and but for four brilliant saves by Kingscourt goalkeeper James Farrelly they would have coasted home.

The would-be winners arguably lost most of the battles but, crucially, won the war with a calm, composed display which belied their youth.

As in last week’s drawn game, Crosserlough grabbed the initiative from the get-go and led their profligate opponents by 0-6 to 0-2 after 15 minutes.

To their credit, Kingscourt dug in deep and helped by a brace by Cian Shekleton cut their deficit to 0-6 to 0-8 at the interval.

Kingscourt carved out a decent goal chance in the 44th minute when trailing by 0-6 to 0-11 but Padraig Faulkner’s effort flew over rather than under the bar.

Appropriately, man-of-the-match James Smith and top-scorer Patrick Lynch bookended the ‘lough’s first title success since 1972 with a point apiece in the dregs of added-on time.