GAA Statistics: Staying with Kilkenny for 60 minutes only half the battle 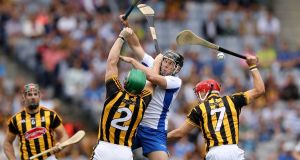 Kilkenny’s forwards set the tempo with their intensity and desire. Photograph: Inpho

Kilkenny have conceded less than a goal a game in their last 15 competitive matches – and they have their forwards to thank for that as much as the nine men behind them.

Much of Kilkenny’s success has been built upon a ruthless intensity, one which starts at No 15 and continues all the way back. Consistently turning up in that frame of mind, then, is what makes them so dominant.

Their standards did drop in the drawn All-Ireland semi-final against Waterford. They managed to avoid defeat to a a talented Waterford team playing out of their skin, but standards dropped nonetheless.

In the first half of that game, there were only two direct dispossessions by a Kilkenny player in the Waterford half. This rose in the second half to eight as Kilkenny were forced to up the ante, and particularly so in the final quarter.

In the replay, this total doubled. Kilkenny players made 20 dispossessions in the Déise half of the field as defenders were forced to battle their way out. That total included four terrific blocks.

Waterford, who were within touching distance of the reigning All-Ireland champions for two weeks running, made nine dispossessions themselves in the replay, compared with seven in the drawn game. So even in that first encounter, they still couldn’t match the somewhat subdued Cats in this area.

The perfect example of this incessant pressure at its most effective was the build-up to Walter Walsh’s goal in the first game.

As Jamie Barron dwelled a moment on the edge of his D, six Kilkenny players swarmed him, breaking away and creating the goal chance. It is the same sort of predator-like approach they replicate around their own D.

That sort of intensity and physicality from their forwards and midfield – twinned, of course, with the defensive expertise of the likes of Cillian Buckley and Paul Murphy – explains why Kilkenny have conceded just 14 goals in their last 15 games in the league and championship.

Thus far in this summer’s championship, an opposing defender has yet to score against Brian Cody’s team. Tipperary’s backline has amassed 0-5 from play in five games this summer. Their midfielders have got 3-8.

To beat Kilkenny then, Tipp will need those players to break the press and provide an attacking outlet.

They’ve done it before: in drawing with the Cats in the 2014 decider, and getting within three points in the replay, their defenders (0-3) and midfielders managed nine points from play between those two games. But it still wasn’t enough.

Those encounters make up two of the last five championship games in which teams have gotten within five points of Kilkenny. The two latest clashes against Waterford and last summer’s All-Ireland final make up the “almost” quintet.

One of the key conclusions gleaned from those games is that teams who are in contention coming into the last 10 minutes against Kilkenny . . . well, they tend to blow it.

With the game on the line in those five – whether it be John “Bubbles” O’Dwyer’s last-minute free going inches wide in 2014, Conor Whelan’s goal chance in last summer’s final, or Pauric O’Mahony’s late free dropping just short a few weeks ago – the chances were there. They certainly were not easy, but they were not taken.

A Kilkenny player fumbled or dwelled too long in collecting possession on 15 occasions, versus 22 times for the other team. An aimless ball to nothing, under pressure to an area where there is no team-mate to compete, was hit twice by Kilkenny players, and seven times by the panicked opposition.

Essentially, then, in the final 10 minutes of these games Kilkenny made 46 per cent less errors. And that is winning.

However, Tipperary’s chances ahead of the weekend will have been buoyed by the injury to Michael Fennelly. The Ballyhale midfielder suffered an Achilles tendon in the semi-final replay which rules him out of action this Sunday.

Since (and including) Kilkenny’s last championship defeat in 2013, Fennelly has played 12 championship games and scored 17 points. He has scored in all but one of the games.

In that time, Fennelly has missed four championship games. Kilkenny drew one and won the other three by an average margin of nine points so they’ll not be put off in Fennelly’s absence.

In truth, very little will put this Kilkenny team off. Be sure: they will press from the forwards back. That will have to be faced head on, and matched.

Stay with them until that final 10-minute period and be certain that they will keep the pressure-stricken mistakes to a minimum.

But who better than the Premier County to match them? Tipperary will know well, however, that when that match clock hits 60, the Cats will pounce and any errors will be punished.