Crossmaglen and Castlebar vying to ease into pole position 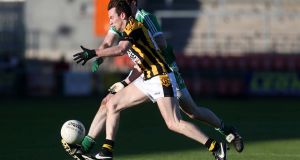 Crossmaglen Rangers’ Tony Kernan: “We thought maybe the amount of Ulster clubs and All-Irelands we had, that was going to be our lot.” Photograph: Matt Mackey/Inpho

On Saturday night in Breffni Park the AIB All-Ireland semi-final between Crossmaglen and Castlebar is expected to produce the club that will win this year’s championship.

That’s not intended as a slight on Ballyboden or Clonmel in the other semi-final but stats show over the past 20 years the winners of the club title have overwhelmingly come from the north and west.

Considering that in the first 25 years of the club football championships just three titles had made their way to the two provinces – all to Ulster – it is remarkable that in the 20 years since, all but four championships have been won by clubs from Ulster or Connacht.

Leading the way are Saturday’s contenders Crossmaglen, whose six All-Irelands since 1997 have catapulted them into second place on the roll of honour but Ballinderry and St Gall’s have also won titles.

The first – and most recent – of those was Corofin from Galway, whose win in 1998 prefigured the county’s breakthrough six months later.

The same player, Ray Silke captained both teams and remembers the impact the club success had at the time.

“It did a lot for the self-belief. There was a strong leadership cohort in the Galway team and I think it had an impact. It was a catalyst but there were others, like John O’Mahony’s arrival and the quality of the players we had and Mayo having come so close in the previous two years.

“There was definitely a view that if Corofin could do it why not the county? And why not other clubs? It’s a common phenomenon in all walks of life. The success of one can drive others.”

The two clubs in action this weekend are coming from very different perspectives.

Crossmaglen are on the trail of a seventh All-Ireland whereas Castlebar have lost the only two finals they’ve contested, in 1994 and 2014. The latter is obviously the more relevant and Silke says the experience of defeat plays its role in preparing sides for winning.

But experience hasn’t always been a help for club teams, as Connacht trailblazers Clann na nGael from Roscommon found out when losing successive finals in the four years from 1987 to 1990.

That has changed in recent decades and a number of teams have gone on to win an All-Ireland after losing a final – including Crossmaglen.

Tony Kernan played for Cross in the most recent wins in 2011 and ’12. He says that experience helps a team get over the long break between winning the province and resuming in the All-Ireland series.

“It’s a tough break and it’s hard to know what way to do it. Different years we’ve mixed it up – I think this is my seventh year doing it – so sometimes we take December off and then come back in January, and sometimes we’ve continued training right the way through.

“It’s difficult to know when you’ve three months until the next game. How do you keep people focused and motivated?

“But then if you keep training over Christmas, some boys are maybe going through the motions. So a bit of a break, I think, is always good and it recharges the batteries.”

The Armagh champions have been extraordinarily resilient, losing at All-Ireland semi-final and final stages but always bouncing back.

Kernan, whose father Joe managed the first teams to win the All-Ireland, admits that the thought that the good times may have stopped rolling crossed his mind.

“I think just the way we had gone in Ulster the previous couple of years – like, we hadn’t won a game in Ulster for two or three years. We were maybe getting on a bit, a couple of the boys, and we had a different management team in and I didn’t think that we would be winning Ulster clubs again.

“We thought maybe the amount of Ulster clubs and All-Irelands we had, that was going to be our lot and we’d look back at that whenever we retired.”

Instead here they are back within a couple of matches of another title but facing west, from where the threat has so often come.