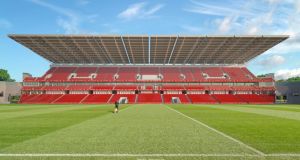 A frontal view of the covered stand. Image: Pedersen Focus

Winning this year’s hurling All-Ireland may be the immediate goal for Cork GAA, but the organisation is also looking to the long-term with plans for a €67 million redevelopment of Pairc Ui Chaoimh.

Cork County Board is preparing to apply for planning permission to Cork City Council for the project next month and County Board chairman Bob Ryan is confident the project will get the go-ahead from planners keen to see the area developed.

“The redevelopment of Páirc Uí Chaoimh will be the first phase of the development of the Marina Park as part of the Cork Docklands project – we had to work closely with Cork City Council to ensure our redevelopment satisfied their plan for the area,” said Mr Ryan.

The existing uncovered or North Stand (with a capacity of 9,000) will also be redeveloped with capacity reducing to 8,000 to allow it be roofed while both the terraces will also be upgraded while retaining their current capacities of 12,500 at both the city and Blackrock ends.

Mr Ryan said the new South Stand will accommodate four new dressingrooms as well as bars, restaurants, meeting rooms and a museum, while it will also accommodate 2,000 premium seats.

In addition to the main pitch which remains the same size with a five-metre surround, the project also envisages the development of a full size all-weather pitch in the former Munster Agricultural Showgrounds with a viewing area on to it from the rear of the South Stand.

And Mr Ryan is confident that if Ireland succeeds in securing the 2023 Rugby World Cup, then the redeveloped Páirc Uí Chaoimh will be in the running to host games.

Rugby World Cup
“The Rugby World Cup wasn’t a factor in our design for the stadium – what we are doing, we are doing to bring it up to standard as a modern stadium for Gaelic games, but if we can do anything to assist the local economy by hosting rugby world cup games, then we will.

“The congress of the GAA has given central council the authority to negotiate with the people bidding for the Rugby World Cup and we’ve backed that at Cork County Board level and I’m confident the new Páirc Uí Chaoimh will more than meet their standards.”