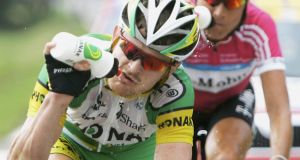 US cyclist Floyd Landis on his way to winning the 93rd Tour de France in 2006. He was stripped of his title after testing positive for artificial testosterone. Photograph: Getty Images

Now might not be the best time for a doper to be peddling what was recently considered a doping product. Especially in that slippery grey area of recovery, between short term-gain and long-term pain, or what might be considered best medical practice.

Only coming soon to a health and fitness magazine near you is Floyd Landis, the US cyclist stripped of his 2006 Tour de France after testing positive for artificial testosterone. (And that was probably just for starters.) These days, Landis heads up Floyd’s of Leadville, producing recovery supplements whose main ingredient is cannabidiol, CBD for short, one of the many components of the cannabis plant, as in the main source of good old-fashioned dope.

Until January of last year, CBD was still on the banned list of the World Anti-Doping Agency (Wada), along with tetrahydrocannabinol, or THC, which is the psychoactive component of cannabis, and still favoured by the proper dope fiend when it comes to getting high. With increasing interest and attention to the potential benefits of perfectly natural CBD – not just in physical recovery, but with anxiety, depression, and plenty other medical conditions – Wada removed it from its banned list, and now things are getting interesting.

Landis is not alone in trying to score in the cannabis trade. Floyd’s of Leadville was set up in Colorado in 2016, when CBD was still a bit of a secret: last month, four-time Super Bowl quarterback Joe Montana, of San Francisco 49ers fame, was part of a $75 million investment in Calvia, the California-based cannabis company also looking to develop their health and recovery products. At least part of the incentive, Montana admitted, was to “market quality health and wellness products that can provide relief to many people and make a serious impact on opiate use or addiction”.

That’s no secret anymore. The over-use of prescription painkillers, or opioids, has been plaguing the NFL for decades. Worst of all are the fully synthetic opioids; fentanyl, tramadol, norco, lortab, lorcet, dilaudid, even methadone. Players just take their pick. Landis admitted he was also addicted to opioids, before he found CBD a more natural alternative. In the US, CBD is booming, annual sales growing at a rate of 55 per cent, and it’s poised to be a $1 billion industry by 2020.

On this side of the world, meanwhile, anything related to cannabis is still seen as a bit dodgy for anyone in professional sport. Only that might be changing too.

Bettered – or was it battered? Bruised, certainly, and bullied, depending on which pundit you believed. England showed little sympathy in beating Ireland into submission at the Aviva last Saturday, leaving an extended injury list as proof: CJ Stander (fractured cheek/eye socket), Garry Ringrose (hamstring), Robbie Henshaw (dead leg), and Devin Toner (ankle), and that’s before the pain of a first Six Nations home defeat in six years. It’s possible the entire team felt black and blue and red all over.

Just two months after Brian O’Driscoll opened his can of worms and recounted the days of munching pills, including certain opioids, to get through matches, CBD products might at least offer one alternative. In that candid Newstalk’s Off The Ball interview, O’Driscoll reckoned he hasn’t felt any adverse effects after consuming the drugs for “the last four or five years” of a bruising career, but added: “Ask me at 75 and see what the state of my insides are like.”

That is just part of the problem with opioids: they can also mask deeper or chronic injury, and worse still, develop some sort of dependency, addiction even. Much of the healing evidence of CBD, typically taken in oil form, is anecdotal, and while perfectly legal in Ireland, it’s not yet approved by the Health Products Regulatory Authority, nor is there any guarantee that some CBD products don’t also contain too much THC (currently recommended at below 0.2 per cent), even if most products here are derived from the hemp variety of cannabis.

Still some of the evidence is speaking for itself, including from England lock George Kruis, one of those to inflict some of that pain on Ireland last Saturday. Along with former Welsh lock and his Saracens team-mate Dominic Day, Kruis last year set up FourFiveCBD (the numbers reflecting their respective jerseys), and are now in the business of selling it to any rugby player seeking that more natural recovery product.

The brand motto of FourFiveCBD is Rest, Recover, Rise, a sort of modern recovery slant on Citius, Altius, Fortius, and Kruis and Day both swear by CBD, both discovering the apparent benefits while recovering from injury. “I also have low-level chronic pain,” Kruis told the BBC, “and I was able to reduce the amount of painkillers I was talking”.

None of these lauded benefits of CBD have so far been proven, nor has there been any agreement on the ideal dosage, or indeed possible effects. It may prove to be just another of those artificial paradises explored by Charles Baudelaire, only it’s also hard to ignore when presented against the known side-effects of opioids and other prescribed painkillers. Plus CBD is easy to take, in capsules, balm, or by tincture, which by the way appears to be working perfectly well for a manqué runner like me.

1 Trump endorsement by Jack Nicklaus leads to avalanche of dismay
2 England lay down marker for Ireland after bonus point win in Rome
3 World Handicap System: What is it? How does it work? Will my handicap change?
4 Galway expose Wexford’s lack of Plan B to reach Leinster final
5 Jota forgets penalty miss to steer Liverpool past West Ham
Real news has value SUBSCRIBE
Here is your handy guide to sport on television this week