“The evolution of our cities is everyone’s business”

Aiming to make the case for urban density in Ireland, a major conference is taking place in Dublin this October, designed to explore ideas about the future of Ireland’s cities 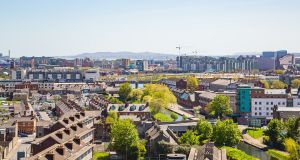 The ULI Ireland conference will discuss the features and benefits of good density in the city. Photograph: Getty /iStock

Should our cities grow up, or out? The answer to this question is frequently debated, but at their annual conference next month the Urban Land Institute (ULI) Ireland aims to make the case for density in our urban areas.

Now in its third year, the ULI Ireland annual conference promises to provide a forum for discourse centred around the theme of “Good Density: Drivers, Dividends & Debates.” It takes place on October 23 - 24 at 1WML, Dublin 2.

With an array of national and international speakers on the agenda, the conference will provide an opportunity to learn from the international experience of city formation, says ULI Ireland chair Tom Dunne. A former head of the School of Surveying and Construction Management at what is now the Technological University Dublin, Dunne was also previously chair of the then Private Residential Tenancies Board from 2004 until 2009.

He explains that the conference will discuss the features and benefits of good density – what it is and what it is not. It will also examine the importance of key infrastructure to make density viable and sustainable.

“The goal is to explore these issues against the backdrop of what has happened in other major cities and ascertain where Ireland could learn from successes and failures elsewhere,” he says.

Contrary to popular belief, density is not necessarily “synonymous with high-rise”, Dunne stresses.

“You can achieve a lot of what you are trying to achieve with reasonable densities but you don’t have to go very high, although it is also useful in cities to go high. That’s why it’s useful to have this forum for discussion around this as many people don’t necessarily understand the definitions of density and high-rise,” he notes.

There is intent to increase the density at which development will take place in the Dublin area, as well as Cork, Limerick and Galway, adds Dunne.

“In urban areas in Ireland there is a need to get density up, this will ultimately mean apartment living and there will be consequences from that. The design of apartments will have to be improved – how they will be built and finances will have to be discussed and debated,” he says, adding that the conference will also explore the economic drivers for this. “We want to investigate the economic drivers creating the conditions whereby you don’t get the same level of home ownership in apartments as you will with houses, for example.”

If you do get urban areas organised with a good degree of density you don’t need cars, and public transport becomes more efficient

The conference will also attempt to illustrate the potential dividend from achieving optimum density, adds Dunne.

“You are five minutes from a bottle of milk, a café or a pub, and maybe 10 minutes from a school. In other words, if you do get urban areas organised with a good degree of density you don’t need cars, and public transport becomes more efficient so there is a huge dividend.”

The issue of density has become especially pertinent against the backdrop of the current housing problem in Dublin and other Irish cities. Dunne says all cities need a wide range of accommodation types.

“In the spectrum of offerings across a city, cities will work better if there is a lot of choice of accommodation. The classic example is of the IT executive coming here to work for four or five years, who probably wants good quality accommodation but doesn’t want to buy and would rather rent. This is a vast market and they need to be provided for too.”

Among the speakers at the two-day event is David Browne, current President of the Royal Institute of Architects in Ireland and managing partner at RKD, Rachel Kenny, director of planning at An Bord Pleanála, Brian Gaffney, director of property finance group at Bank of Ireland and Pat O’Sullivan, Head of Research at AIB.

“She has had a very interesting career in the UK so would be fully familiar with the issues you come across when running a city and providing the infrastructure needed for density.”

“This is the kind of build we are all talking about when it comes to making Dublin a liveable city,” says Dunne.

ULI has over 40,000 members in 75 countries and the institute represents the entire spectrum of land use and property development disciplines, across both the public and private sectors. It is a truly  international organisation that is dedicated to best practice in real estate development, but Dunne is keen to impress that it is a multi-stakeholder endeavour.

“It’s not only an organisation of real estate developers, members may come from the public sector or from industries such as banking, finance and law. It’s not just property people talking to property people, it takes in a wider spectrum of interests. It has the capacity to look at exemplars of best practice in other parts of the world and bring that knowledge to Ireland.”

Ultimately, the conference will tease out what is needed to build sustainable, thriving cities, and all are welcome, says Dunne.

“Everyone has a stake in this - the evolution of our cities is everyone’s business.”