Who was Mary Magdalene?

In 'Mary Magdalene', which is in cinemas now, a clearer picture emerges of the woman who was a key apostle to Jesus 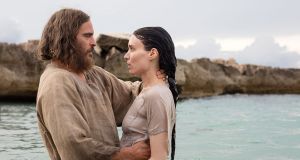 Rooney Mara has been garnering rave reviews for her portrayal of Mary Magdalene in the film Mary Magdalene, now in cinemas nationwide. It's a story that aims to set the record straight about a woman who has been much misunderstood throughout history.

But who was she really? Mary Magdalene is often portrayed as someone who was a prostitute or a fallen woman but the movie chronicling the life of the person who it is now known was one of Jesus Christ’s most ardent followers, sets out to give a more true representation of Magdalene; that of free thinker and non-conformist.

In Mary Magdalene, which is in cinemas now, a clearer picture emerges of the woman who was a key apostle to Jesus.

In the movie, starring Joaquin Phoenix as Christ, Magdalene becomes a favourite pupil of Jesus and was with him through his ministry in Galilee. She was said to be present for the raising of Lazarus, the removal of the money lenders from the Temple, the last supper and of course, she was said to be there for his crucifixion when he cried out “My God, my God, why has thou forsaken me?”

It is believed Magdalene was a strong, intellectual woman who turned her back on the roles women were expected to assume. She didn’t get married or have children and dedicated herself to following Christ. Perhaps for that reason she was sometimes classed as mad or possessed.

One of the most one-dimensional portrayals of her was in Andrew Lloyd Webber's hit musical, Jesus Christ Superstar, where Mary sings about the “many men” she’s “had”, painting her again in the role of a woman of “loose morals”.

Magdalene’s character has cropped up in a number of movies depicting the life of Jesus, including Martin Scorsese’s film The Last Temptation of Christ, Mel Gibson’s The Passion of the Christ and the much earlier George Steven’s film The Greatest Story Ever Told. She is also referred to in Dan Brown’s bestselling novel, The Da Vinci Code, where she is written as the wife of Christ, who also bore him a child.

Five things you may not have known about Mary Magdalene:

Will this movie finally put to rest any commonly held beliefs about this exceptional woman? And in a time of #MeToo could Magdalene become an idolised figure among feminists, someone brave enough to question the patriarchy and the societal norms of her time and to flout them? Only time will tell.