Ulster University scientists at the forefront of battle against pancreatic cancer 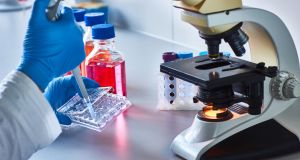 Pancreatic cancer remains one of the most lethal cancers, with little improvement in survival outcomes in the last 40 years.

In Ireland, there are around 500 cases of pancreatic cancer diagnosed a year, with a bleak prognosis for those affected; only 3 per cent survive five or more years after their initial diagnosis.

However, an exciting new treatment developed by leading scientists at Ulster University could have a dramatic impact on outcomes and quality of life for pancreatic and other cancers.

This proprietary platform has provided impressive size reduction in pancreatic, prostate and breast tumours in animal models to date. It also minimises the adverse side-effects associated with conventional chemotherapy. The technology will soon move to clinical trial stage in humans with the aim of having it available for patients within the next few years.

Prof Callan, Norbrook Chair in Pharmaceutical Science at Ulster University is a chemist by training, with over 20 years’ experience in the discovery, development and formulation of new drug candidates, while Prof McHale, Professor of Medical Biotechnology at Ulster University, has extensive experience in the creation, pre-clinical development and early-stage clinical testing of an ultrasound-based therapy for cancer.

Together they have spent over seven years developing Sonotarg. Their aim was to create an effective targeted drug delivery mechanism for cancer tumours and they chose pancreatic cancer as it is a notoriously difficult to treat cancer in desperate need of new, more successful therapies and innovative treatment approaches.

A key reason outcomes for pancreatic cancer are so poor is because the tumours consist of very dense tissue, with a poor blood supply. This makes it very difficult for cancer drugs to penetrate the shield-like stroma tissue and get to the cancer cells. It also means that very high doses have to be given to patients, causing a lot of side effects for patients but with little positive impact on the tumour.

Originally they looked at using photodynamic therapy - the activation of light using compounds - but it was not viable for delivering therapeutics into deep, dense tissue; and its need for a lot of oxygen, not a feature of solid tumours, was another drawback. “It is also very difficult to focus light into a single point in three dimensions in a tissue,” explained McHale.

The benefits of ultrasound is that not only is it a very safe technique, it can also penetrate very deeply into tissue and you can focus it onto a single point

So to overcome these issues Callan and McHale then turned to sonodynamic therapy, which uses ultrasound instead of light.

“The benefits of ultrasound is that not only is it a very safe technique, it can also penetrate very deeply into tissue and you can focus it onto a single point,” Callan said.

To increase both the amount of the drug that can be delivered to the targeted tissue and the level of oxygen into the tumour where it is low, they utilised microscopic particles known as microbubbles. These are already in widespread use as contrast agents to improve ultrasound-imaging techniques.

“The bubbles have a lipid shell and the core of the bubble is a gas so we have modified them to carry oxygen gas in the core and our sensitiser and chemotherapy drugs in the shell of the bubble,” Callan said.

With Sonotarg, the microbubbles are subjected to a slightly higher intensity ultrasound pressure compared to diagnostic ultrasound, causing them to burst.

“So effectively, by using ultrasound at a particular pressure and focusing that ultrasound at a solid tumour, such as a pancreatic tumour, we can control the explosion of these bubbles to release the drug payload and oxygen in a targeted manner,” Callan explained.

This is essentially why Sonotarg has proven so successful in treating models of pancreatic cancer - it can penetrate and deliver treatment deep into the thick tumours.

Having an external stimulus to be able to control what happens is an additional benefit of Sonotarg over existing targeting therapies, such as molecular targeting, noted McHale, and resistance also does not appear to be a problem, unlike some other newer cancer therapies.

“Another interesting aspect of being able to target the chemotherapeutics is it allows you to use an awful lot less chemotherapy drug, and there are a lot of benefits to that, particularly for the patient in relation to adverse side effects,” McHale said.

Who will be suitable for Sonotarg?

Currently only about 20 per cent of pancreatic patients are suitable for surgery, and therefore the chance of longer-term survival or even a cure.

The aim is to use Sonotarg to shrink tumours in the approximate 40 per cent of pancreatic cancer patients with larger tumours that are not metastatic: “We feel this is a group of patients we can make a very positive difference to with this technology, to shrink the tumour and allow the surgeon to operate and thus offer improved survival rates,” Callan said.

Sonotarg could also be used as a palliative treatment in those with metastatic pancreatic cancer, the remaining 40 per cent, to manage their disease with an improved quality of life, he added.

We know it works in a pre-clinical level in laboratories and are very keen to see how effective it is in patients. So we are very excited about the future and what it could mean for patients

The Sonotarg team is now keen for their technology to be made available to patients and are working with Prof Mark Taylor, lead consultant Hepatobiliary and Pancreatic Surgeon in the Belfast Health and Social Care Trust, to set up a small clinical trial in Northern Ireland within the next 18 months to two years. Should this trial prove successful, they then hope to progress to larger, more advanced clinical trials and wider availability for patients within about three to four years.

As Sonotarg utilises existing, safe microbubble and ultrasound technology the “bench to bedside” process should be shorter compared to that of novel compounds.

Sonotarg is currently entering its first funding round to move to the clinical trial stage, and has received financial support from the UK Pancreatic Cancer Research Fund and Invest NI.

“We have shown that sonodynamic therapy works well not only with the chemotherapies used in pancreatic cancer, but other types of cancers and cancer treatments. We know it works in a pre-clinical level in laboratories and are very keen to see how effective it is in patients. So we are very excited about the future and what it could mean for patients,” Callan concluded.