From sports events, to music, foodie trails and breathtaking scenery, there’s something for everyone in Northern Ireland 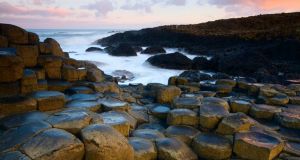 Last year was the Year of Food and Drink in Northern Ireland as the country marked another big year in its ever-expanding tourism market. However, 2017 is set to be just as big, with a number of key events taking place across the country. We’ve picked the  key attractions that stand out for the year ahead.

1. Lines of Thought Exhibition at the Ulster Museum

The new exhibition at the Ulster Museum explores drawing, the history of the medium, and also offers an insight into the styles, minds and works of some of the world’s greatest draughtsmen of the last 500 years, featuring a selection of works including Michelangelo, Picasso, Rembrandt and Julie Mehretu (pictured). The exhibition is one of the largest-ever touring shows from the British Museum’s Prints and Drawings Department and opened on March 10th.

The Cathedral Quarter in Belfast is the hub of cool in Northern Ireland’s capital and the area’s arts festival is their main calling card. Between 27 April and 7 May you can catch performances by Robert Cray, The Handsome Family, Booker T Jones, The Americans, the Divine Comedy, Rich Hall, the Sugarhill Gang, Madison Violet (pictured) and a whole host of other Irish and international bands, musicians and comedians. All events are hosted at venues in the area with the bars and restaurants of Belfast City Centre, such as The Dirty Onion, 21 Social, Berts Jazz and Bar Restaurant and The Crown Liquor Saloon as the backdrop.

The world’s most infamous ship was built by Harland and Wolff in the Belfast docks and five years ago the Titanic Belfast museum was established to tell the story of the ship from its creation right to its ill-fated maiden voyage. Last year the attraction was named World’s Leading Tourist Attraction at the World Travel Awards, beating off competition from the likes of the Ferrari World, Abu Dhabi, the Vegas Strip, USA, Machu Picchu, Peru and Guinness Storehouse, Ireland.  It is the first time an attraction from Ireland, North or South, has won the prestigious accolade. The Eric Kuhne-designed building is worthy of the admission price alone, while the exhibition allows you to walk through the recreated shipyard and interior decks, as you absorb the real story of what happened when the ship went down on 15 April 1912.

The works and life of one of Ireland’s most loved writers, Seamus Heaney, is celebrated at the HomePlace museum. Located in Heaney’s hometown of Bellaghy, near Magherafelt, the museum traces the poet’s life from his upbringing in the area, through to his highest honour when he was awarded the 1995 Nobel Prize in Literature.

The Gobbins coastal walk is set to reopen summer 2017 following essential maintenance work. The outstanding natural attraction is the only guided adventure walk of its kind in Europe, and holds huge appeal for nature lovers due to its varied wildlife and habitats, offering the opportunity to see one of the few mainland puffin sites in Ireland.

Running across the northern coast of Northern Ireland, the Causeway Costal Route is one of the island of Ireland’s most beautiful stretches and offers a whole string of visitor attractions that mark themselves out as must-sees. These include the Giant’s Causeway itself, as well as the Carrick-A-Rede rope bridge, the isolated Dunluce Castle, perched on a cliff looking out over the Atlantic Ocean and the stunning grounds and building at Downhill Demesne. There are also plenty of lesser-visited attractions along the stretch, including Northern Ireland’s only inhabited island, Rathlin Island, and six Economusée Artisans, which showcase traditional crafts that have been maintained through to the present day.

The Year of Food and Drink may be over, but Northern Ireland continues to produce high-quality food products and tours across the board. Causeway Coast Foodie Tours offer visitors the chance to see and taste the best produce from this area of Northern Ireland, including local fisheries on their Catch and Sea Tour. The Erne Water Food Trail brings guests out on the water with stop-offs at local eateries to taste products such as Sheelin’s Ale, O’Doherty’s Fine Meats and Erin Grove Preserves. The Belfast Food Tour offers guided walks through the capital that stop off at eateries in St George’s Market and the Cathedral Quarter. NI Food Tours run tours through Co Down, taking in the stunning coastline of Strangford Lough. Cycle Sperrins runs cycle tours of County Derry, lasting for two hours, and stopping off at the county’s best local suppliers.

For more on the Erne Water Food Trail visit www.nigoodfood.com/activities/lough-erne-food-trial/

For more on the Belfast Food Tour visit www.discovernorthernireland.com/Belfast-Food-Tours-Belfast-P42020

Northern Ireland is one of the golf capitals of the world, and the home of three Major winners in Rory McIlroy, Darren Clarke and Graeme McDowell. That fine pedigree and history for the sport is set to continue with three major tournaments being hosted in NI this year. The Causeway Coast Amateur Golf Tournament (5-9 June) takes place across Royal Portrush, Ballycastle, Castlerock and Ballyliffin. Now in its 50th year it’s the largest amateur golf tournament in Europe and is open to competitors with a handicap of 20 or less.

For those who prefer to watch the sport, the Dubai Duty Free Irish Open, hosted by the Rory Foundation, will come to Portstewart (pictured above) for the first time between 6-9 July. The European Tour’s best golfers will descend on the Causeway Coastal Route to compete for honours and prize money and mix with the locals and tourists alike in the nearby town.

The Women’s Rugby World Cup starts in Dublin on 9 August, but the play-offs and final on 26 August will take place in Northern Ireland at the Kingspan Stadium in Belfast. Ireland recorded their best-ever finish of fourth in the last World Cup, and will be looking to reach a first-ever final this time out. You can also, of course, see four-time World Cup winners, New Zealand, in action.

Gran Fondo stands for long-distance road race, or big ride, in Italian and first came to Northern Ireland with the Giro d’Italia in 2014, when the Grand Tour event began in Belfast, and took in Armagh on its way to Dublin. The Gran Fondo offers amateur cyclists a chance to ride an event like the professionals on the weekend of 3-4 June, where they can tackle some of the most historic and iconic climbs in Northern Ireland, including the jewel of the Gran Fondo Northern Ireland, the climb of Monte Spelga Dam, with a post-ride party thrown afterwards with a focus on Italian food, beer and wine.

For lots more events and places to visit in Northern Ireland visit www.discovernorthernireland.com