A coastal stone cottage, dating from the 1890s, is the quirky new home of Grainne Walsh, who left her life in Dublin to set up Metalman Brewing in Co Waterford

Grainne Walsh, Metalman Brewery: “Home is somewhere you feel completely relaxed and at ease in. Everyone’s idea of a comfortable home is different, but for me it’s about space and access to outside space.” 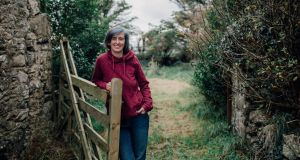 Grainne Walsh, Metalman Brewery: “Home is somewhere you feel completely relaxed and at ease in. Everyone’s idea of a comfortable home is different, but for me it’s about space and access to outside space.” Photographs: Tanya Colclough

Waterford’s mighty Copper Coast can be seen in the distance as you turn right into the narrow, bumpy driveway that leads to the home of Grainne Walsh and Tim Barber, co-owners of Metalman Brewery in Waterford city.

The couple set up the brewing company in 2011, turning a part-time hobby into a full-time business, after both left busy but sometimes unfulfilling careers in IT. They say they’ve never looked back.

Until last August they were living in a three-bed semi-detached house in a new estate in Waterford, when they made the conscious decision to move further away from their brewing business and closer to the sea.

Lots of tumbledown outhouses and overgrown foliage form part of the charm of this homestead, which dates back to the 1890s and the new stone cottage which the couple now call home was designed and lived in by an architect in the 1990s. It was a stipulation of planning permission that much of it be built with reclaimed materials from the original farmhouse, which adds to the distinctiveness of this property.

“We found the house by accident. We weren’t looking to move, but I always had a hankering to live by the sea. We were instantly captivated by this house. It has a lot of character and spoke to us as being quirky and outside the norm and that felt like our kind of place,” Walsh says.

Working in a “frantic” small business means it can be difficult for the couple to switch off from the brewery, but Walsh says this home provides that “haven”.

“I think living in an area like this gives you so much space and peace. It feels quite separate to where I work. That helps me make better decisions because I’ve had that space from the brewery. There is a very deliberate 20-minute drive to and from work,” she says.

The property sits between the village of Annestown and the beautiful beach at Kilfarrasy, while the brewing business is located in Waterford city.

Home and work are integrated in many ways and it is Walsh’s love of “living outside the norm” that led to both the home and business.

“When we saw this house, the fact that it wasn’t like any other was what appealed to us. It’s so unusual, and that matched our desire to move out of something that was very nine-to-five, to take the plunge and set up a brewery, even with zero background in the drinks industry. It was making a path and route for ourselves, and this home felt like that too. It appealed to us more than building our own house,” she says.

Both took what was most likely a very calculated risk in setting up the business, as Walsh knew she was never going to truly be passionate about IT.

“I was working in a company that was a lot of fun, but I knew I’d never be truly engaged. I knew if I was doing something relating to one of my own hobbies, I could find that energy in my work. I loved brewing beer at home because in 2007 it was quite hard to get a good craft beer in Ireland. By 2010 I was ready to do something different.

“I researched the market and decided there was a really good opportunity for a small brewery in this part of the world. I handed in my notice, left my husband in his ‘real job’ in Dublin, and I came down here and set up the brewery.”

Now in its eighth year, Metalman is a 24-hectolitre brew house, with Ireland’s first canning line also at the micro-brewery. Their beer cans carry a very distinct logo, which was inspired by Walsh’s love of Art Deco architecture.

That love of architecture led to this unusual house, with its quirky corners, dramatic fireplace, and a secret stairway leading to an attic bedroom. A long glass walkway faces out to the sea and was built more for functionality, to protect against the bracing winds, and it certainly had its mettle tested against Storm Ophelia last year. Walsh says that experience made her very aware of the power of nature.

Apart from a new colour palette, the couple has done little to change the aesthetic of the house.

“It seemed to be perfectly made for us and the house was in very good condition. Some of the colour schemes may not have been to our liking, so we did some painting. We also wanted to tame the outdoor wilderness as the house was unoccupied for a year before we moved in. The house really is its own thing and we are just minding it for now,” she says.

Both Walsh and her husband travel extensively for work and no matter where she has been, or how much fun she has had, home is somewhere she looks forward to returning to.

“Home is somewhere you feel completely relaxed and at ease in. Everyone’s idea of a comfortable home is different, but for me it’s about space and access to outside space. I like to be able to see the horizon and I like when it’s far away, which I have here. I think home is also about who you share it with,” she says.

A pleasant working environment is also a top priority, something she feels she has achieved with the brewery.

Shout loud to be heard

Located in an old factory which is sub-divided into industrial units in the heart of an old residential area of Waterford city, it is on the same street where her dad grew up. Her grandmother and aunts also worked in that very same factory.

“There is some history there and the building spoke to me. There is a lot of natural light, high ceilings and it feels really spacious. It’s a really nice place to be.

“There are seven of us working there. The brewing process involves trying to figure out what we’re going to brew for the next few months, then we play around with flavours, recipes and styles.

“It’s a very innovative space at the moment, and you need to think about how you are going to captivate somebody to drink your beer.

“It’s a fun industry, with lots of interesting people involved. It’s not without its challenges, and the drinks industry is dominated by big players, so you need to shout loud to be heard. However, there is always somebody you can call on when you’re having a bad day.”

While she’s extremely content with life right now, Walsh says she’s far too “flighty” to consider anything being for life, including the home that they adore.

“This is our home for now but I would never rule out living somewhere else – a new country, a different place or different space. Life is all about new experiences.

“I have no huge interest in material things, it’s all about experiences for me. I love to travel, see new cultures and new people and I think all of those things contribute to a feeling of home.

“This is perfect for us right now but who knows what next year will bring,” she says.

See the full Story of Home series at irishtimes.com/storyofhome