No one is building more offshore wind energy than SSE, one of the principal partners to Cop26 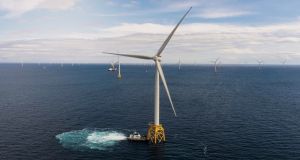 Since entering the Irish energy market in 2008, SSE has invested significantly to grow its business here, making a total contribution of €3.8 billion to Ireland’s economy over the past five years.

SSE owns and operates 28 onshore wind farms across the island of Ireland, avoiding almost 630,000kg in carbon emissions annually, while also providing a route to market for the renewable energy generated to more than 750,000 domestic and business customers.

This year SSE will be a principal partner for Cop26, the annual global United Nations climate change summit which takes place in Glasgow in November.

Cop’s goal is for the world to achieve “net zero” by 2050, whereby any carbon emissions are balanced by absorbing an equivalent amount from the atmosphere.

Helping the world to achieve this is at the core of SSE’s low carbon strategy, helping to keep global warming to less than 1.5 degrees above pre-industrial levels.

Climate action and economic renewal are at the core of the Green New Deal set out by the Irish Government, and SSE believes that a green economic recovery from coronavirus will deliver a win-win for both economy and climate.

Its renewable energy development and operations business, SSE Renewables, is building more offshore wind energy than any other company in the world right now. In Ireland, it plans to spend up to €6 billion to deliver 2GW of offshore wind energy by 2030, beginning with the second phase of the Arklow Bank Wind Park which it is targeting to deliver by 2025 and, when complete, will power almost half a million homes, avoiding more than 460,000kg of carbon emissions annually. The company has a vision to deliver further projects at Braymore Point off the coast of Co Louth, and Celtic Sea Array off the coast of Co Waterford.

SSE is playing its part in other ways too, signing up to the Science Based Target Initiative to cut the carbon intensity of the electricity it generates by 60 per cent between 2018 and 2030. It cut absolute carbon emissions by 40 per cent over the same period. SSE also aims to ensure that at least 50 per cent of its supply chain has science-based targets by 2024.

Through its green energy supply business, SSE Airtricity, the company works closely with business customers on a variety of initiatives. It recently partnered with Microsoft Ireland on a renewable energy project that enables schools to power classrooms using energy generated from their own rooftops.

As a generator and supplier of renewable energy, SSE enables businesses of all sizes, from 10 to 10,000 employees, to run on 100 per cent green electricity.

“Sustainability defines SSE,” explains Rachel McEwen, its chief sustainability officer. It is, she says, about being led by a clear purpose. “Our purpose is based on finding the profitable solution to the problem of climate change.”

SSE is a FTSE 100 company headquartered in Perth, Scotland. Its acquisition of Ireland’s pioneering wind-energy company Airtricity in 2008 was a key moment for the company, she points out, putting it in a strong position to take the lead in relation to the green transition.

“The move to ‘net zero’ and the 1.5 degree climate change imperative have been baked into our business operations. Our priority is to build the low carbon infrastructure to bring it about,” says McEwen.

Rather than distract from it, she believes the pandemic is helping “to focus minds on climate change”.

That’s good because global average temperatures currently stand 1 degree higher than in the pre-industrial era, and Cop’s 1.5 degree objective simply “can’t be done without moving to net zero”, she points out.

All businesses have a role to play by limiting their own carbon footprint and SSE is walking that walk. “We are on a mission to reduce carbon emissions and have done so by two-thirds in the past decade, but we need to get every last gram out,” she says.

Setting comfortingly long-term targets isn’t enough – for either companies or countries. Interim targets are required, she cautions: “People need to see what you are doing in the shorter term as well.”

Ensuring “masses of renewable energy” is the quickest way to do this at scale, she points out, and that will bring down prices. “For the consumer, price is important and offshore wind is a game changer in that respect,” she says.

But cheaper green energy and the good jobs it brings are only part of the story. Ultimately, it’s about the planet.

“Tackling climate change is the defining challenge of our generation,” she says.

Stephen Wheeler, SSE’s country lead in Ireland, agrees, saying “Cop26 represents a once in a lifetime chance to do something about climate change, to get this right.”

Offshore wind will do a “lot of the heavy lifting” he says, a positive whirlwind Ireland is well placed to reap. “Ireland’s seabed is 10 times the size of its landmass. We have the best winds in the world and an opportunity to become a global leader in the export of offshore-generated energy,” he says.

With the building of Ireland’s first offshore wind turbines, off the coast at Arklow over 15 years ago, Ireland was a pioneer with huge ambition. Over time that focus was lost while interest remained with onshore wind, which has been a major success story for Ireland. “It was the low hanging fruit in some ways,” he explains.

As a result however Ireland is now “behind the pack” in what has gone on to become a globally competitive market.

Given where Ireland needs to be in terms of its emissions targets by 2030, “now is the perfect time to drive this forward”, says Wheeler.

Ireland hit record electricity demand on three occasions since October, he points out, and economic growth will increase demand even more.

“We have a complete advantage here. We have the best wind resource and are well positioned to take advantage of that for jobs, for investment, and, first and foremost, for creating the energy we need in Ireland,” he says.

“As we come out of Covid-19, renewable energy offers an incredible opportunity to kick-start the economy in a sustainable way for future generations.”

Discover more about SSE’s commitment to a net-zero transition at www.sse.com