South Africa has everything from wild coastlines to rugged mountaintops and super cities. Here are 10 great highs to get you going, when deciding what to experience 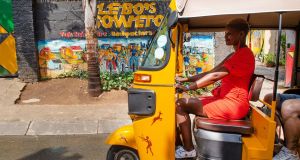 Get a fuller understanding of township life with a visit to Soweto in Johannesberg.

Whether it’s a chance to immerse yourself in its cool cultures, experience its unique heritage, watch amazing wildlife or simply get out into the greatest of great outdoors, visitors are spoiled for choice. Here is a selection of just 10 of the many thrills to experience on a visit to the Rainbow Nation.

Head up and away in a hot air balloon

For an all time high, rise above it all in a hot air balloon. Drift lazily over the tree tops in the stunning Magalies River Valley, an hour and a half’s drive from Johannesburg. Rise with the sun and watch out over a very special landscape that is credited as the birthplace of mankind. The nearby Cradle of Humankind Heritage Site is home to 40% of the world's human ancestor fossils.

Get a fuller understanding of township life with a visit to Soweto in Johannesberg. See how it has transformed itself from its difficult past into a vibrant and buzzing neighbourhood. Don't miss the chance to visit Mandela House, the  extraordinary Nelson Mandela National Museum. Then make a break for the vertical adventure centre at Soweto Towers, the former cooling towers which are now home to a thrilling bungee jump 330m from the ground.

Gain a deeper understanding of South Africa’s history to fully appreciate the truly inspiring transformation that has taken place here since Nelson Mandela's ‘Long Walk to Freedom’. Come face to face with the country’s past at the Apartheid Museum at Johannesburg, dedicated to the triumph of the human spirit over adversity. It is an intensive - and intense - account of the rise and fall of apartheid, documented in a highly accessible fashion.

Raft down the Orange River

Get off the treadmill - and the road – and raft down parts of the Orange River, South Africa's longest, at 2200km. It’s a great holiday option with stretches suited for rafters of all ability levels. Choose the rugged Richtersveld, a desert landscape characterised by rocky ravines and high mountains, in the north-western corner of South Africa’s Northern Cape, which is safe enough for entry level rafters, or the gathering momentum and lush scenery of the Green Kalahari, for white water excitement.

Hike your way up the steep path to the top of iconic Table Mountain - or take the easy option and hop in a cable car. Either way, the incredible vista of Cape Town stretching out beneath you is one you’ll never forget. For added drama, go at sunrise. There’s nowhere better to do your sun salutations in an early morning yoga class. Or catch the colours of the setting sun with a visit just before sunset. At any time, it’s spine-tinglingly magical.

Get active in the Garden Route

Take a road trip with a difference along the stunning Garden Route, between the Eastern and Western Cape. It’s a concentrated distillation of the most picturesque features of South Africa’s landscapes. Checkout the deepest azure blue of the Knysna Lagoon, framed on either side by twin, towering headlands. Get active along Plettenberg Bay, fringed with golden sands and famed for its watersports. For added thrills, take the Bloukrans Bridge Bungee Jump - the highest single span bridge in the world at over 200m. Then get your breath back with a hike along the Otter Trail, a scenic 40km route from Storms River Mouth to Nature's Valley, in Tsitsikamma National Park.

See the elephants at Addo

For almost a century the Addo Elephant National Park, on the Eastern Cape, has provided a refuge for these magnificent animals. Situated close to Port Elizabeth, today it has one of the largest elephant herds in South Africa and is the perfect place to watch them as they go about their daily lives, which for youngsters means playing at the local watering hole. At more than 1600 sq km Addo is one of the country’s biggest national parks but with its amazing underground hides and lookout platforms, it’s also the perfect opportunity to see these majestic creatures up close.

Make the most of South Africa’s amazing coastline with a horse ride through the surf at Coffee Bay, on the Eastern Cape’s Wild Coast. Rich in Xhosa culture, the area has breathtaking beaches and rocky outcrops, including the famous Hole in the Wall, a natural fissure with views out to sea. The main beach here is famous for its surfing, so rent a board - or book a lesson - and ride some waves in an iconic location.

Hike an escarpment at Drakensberg

Touch the sky at the Drakensberg, South Africa's largest mountain range, which forms the borders between KwaZulu-Natal and Lesotho. It’s a hiking spot beloved by South Africans, atop a 1000m escarpment that stretches for more than 240km. Or stay low and explore its foothills, famous for ancient cave art. Team it up with a city break in Durban, on South Africa’s northeast coast. It’s the largest city in KwaZulu-Natal province and is famous for its beaches - including the iconic Golden Mile – all lapped by the warmth of the Indian ocean.

Go on safari in Kruger

For the Big 5 of elephant, lion, leopard, buffalo and rhino Kruger National Park in Mpumalanga is a great place to go. It also has cheetah, giraffe and hippo too, which is why the word Kruger is practically synonymous with safari. A game drive here is an experience you’ll never forget, particularly as you can relive it all afterwards over sundowners in a magical landscape.

To learn more about the destination, visit www.southafrica.net/uk/en/travel