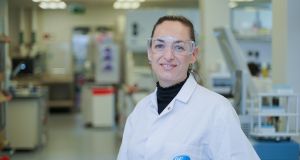 Scientist Orla Cunningham is senior director of Pfizer Ireland’s BioMedicine Design group, based in Co. Dublin. The role puts her at the cutting edge of drug development. Yet she might very easily not be doing it at all. “When I was doing my Leaving Cert I was trying to decide whether to do English or science.”

In the end she opted for a degree in biochemistry at Trinity College Dublin, but her love of language still stands to her in her current role. “People generally see science and the arts as being opposites but I disagree.
A huge part of what I do now depends on the effective communication of science.”

After securing her PhD, she moved to Italy as a post-doctoral researcher at the Institute of Molecular Oncology in Milan. “I had no Italian at all so it was total immersion, but I loved it and ended up staying for five years.” The institute was organised into large communal labs. “We were encouraged to be open and share ideas, to move around and interact with people from different disciplines. This is a much more common approach now but at the time it was a whole new model for me and proved a really great learning experience. It helped me to understand that a team can achieve so much more than an independent researcher.”

Her next move was back to Ireland. “My dad was keen for me to move back to Dublin. This was back in the day when jobs were still advertised in newspapers and I would often find clippings tucked in with my regular letters from home. One of these caught my eye, it was an ad for a principle scientist role with a new drug discovery group being established by Wyeth in Dublin.”

I had no experience of industry-based research, my peers had done the academic research route and I was intrigued

“I had no experience of industry-based research, all of my peers had gone down the academic research route but I was intrigued and wanted to hear more. I travelled to Cambridge in Massachussets for my interview and was just blown away by the facilities there, the technology platforms, the large multi-disciplinary groups. At the time – and still today – it was the only big pharmaceutical company to have established a pre-clinical drug discovery group in Ireland. It was such a thrill to be there from the very beginning establishing the Dublin group.” Things started with an empty lab in the Conway Institute at UCD, before the group moved to its current home at the Grange Castle site in Dublin shortly before Wyeth were acquired by Pfizer in 2009.

The pharma sector is upheld by three pillars: drug discovery, development and finally, manufacturing. “Here at Pfizer Grange Castle all three are done under one roof which is unique across Pfizer’s European network, no-one else is doing what we do here.” Cunningham speaks of the importance of the move to the Grange Castle site for the BioMedicine group’s development. “Prior to coming on-site we were very much focussed on finding molecules with the right biological activity but maybe not thinking too far downstream. Being co-located with our development colleagues allowed us to better understand the challenges they face in scaling up production of these molecules from a test tube to a 10,000 L bioreactor. This idea of developability is now a key part of our discovery programs from inception.”

Aside from collaborating across Pfizer’s diverse research units, including oncology, inflammation & immunology, rare diseases and metabolic disease, the BioMedicine Design group has also developed strong links with the Irish biomedical research network through a unique partnership with Science Foundation Ireland. In 2015, Pfizer and Science Foundation Ireland announced the SFI-Pfizer Biotherapeutics Innovation Award Programme, a collaboration which provides qualified academic researchers with an opportunity to couple their novel biological insights with drug development expertise provided by Pfizer. To date, eight collaborative projects have been funded across UCD, UCC, TCD, RCSI and Maynooth University. In addition to funding, the academic researchers have the unique opportunity to work with Cunningham’s team in the BioMedicine Design group, with some carrying out additional training at Pfizer’s US-based research units.

The researchers have been working in collaboration with Pfizer on potential new therapies for diseases such as haemophilia, fibrosis, psoriasis, Crohn’s disease and breast cancer. Given the complexity of the biological pathways involved in disease, and the technical challenges associated with developing effective therapies to modulate these pathways, attrition in early stage drug discovery is high. “This is the real advantage of these programs, we are partnering with experts in their respective fields who bring truly novel insights that can help us to better shape our project strategy. It’s a great model because we are learning from each other,” she says.

The awards meet an important part of Pfizer’s model, which is to focus research and development (R&D) on core areas where it believes it is best positioned to bring unique, needed therapies to patients. The team are currently undertaking feedback sessions on the previous funding programmes “to figure out what’s working well and what’s not and try to learn from that for our next call,” says Cunningham.

She currently has a 25-strong team of colleagues in the BioMedicine Design group, a diverse mix of scientists from a variety of research backgrounds. Specific training is not what the group look for when recruiting, rather an ability to engage and enthuse others with their own research story. “They have to be really good communicators because being able to connect across the global Pfizer community is key to project progress. We’re lucky to have a young, diverse, dedicated team here and have had very little attrition over the years. An open and discursive environment enables the kind of scientific debate that we need to develop the best strategy at the beginning of new projects. We might have more than ten projects running in parallel at any one time so every day brings a new challenge!”

This year the Biomedicine Design group is celebrating ten years at Grange Castle, with plenty to show for it. “We have contributed to the development of new technology platforms and made a number of molecules that are now moving through clinical trial,” says Cunningham. “What would be really great would be to come full circle and have one of these molecules come home to Grange Castle for manufacture.”