Lisney’s outlook for 2018: increased growth, builds and values across the sectors 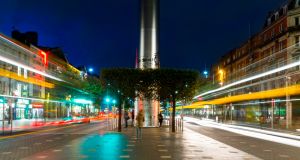 On the move: “The construction of new office buildings has been the biggest story in the office market over recent years.” Photograph: iStock

As the economy continues to strengthen, almost all aspects of the property sector are experiencing growth and enhanced activity.

Here, Aoife Brennan, research director at Lisney, outlines some of the major changes ahead for the property sector in 2018.

2017 was the busiest year ever in the office market with about 340,000 sq m of space let – the second and fourth quarters of the year were particularly busy with both exceeding 100,000 sq m. “About one third of this was accounted for by the tech sector and about 50 per cent was from international companies such as Facebook, Adobe, LinkedIn, Informatica, Citrix, Indeed,” says Lisney research director, Aoife Brennan.

Most of these were expansions of existing operations and this is a particular characteristic of the market, she notes. “These global tech companies tend to expand rapidly and take very large amounts of space. Take Facebook and Google, for example. Facebook is only in the Irish market since 2009 and has grown from less than 2,000sq m in its first year at Hanover Reach to almost 39,000sq m in several locations since. That’s a 1,850 per cent increase and the company now occupies 1.7 per cent of the city centre office stock.”

The Google story is even more impressive. “Google took its first lease in Dublin in 2003 – just 460 sq m on Earlsfort Terrace. Since then it has grown to over 66,000 sq m across a number of city locations, including Eastpoint. Now in 2018, it is finalising a deal on 8,360 sq m in Sandyford – its first suburban location. People used to gravitate towards companies like Google and this is a sign of the companies gravitating towards the workforce. For Dublin to continue to attract occupiers like Google, we need to have top quality space available at any given time.”

Unsurprisingly, Lisney expects 2018 to be another busy year in terms of activity in the office market. “The construction of new office buildings has been the biggest story in the office market over recent years,” Brennan adds. “And these buildings started to become visible on the Dublin skyline in 2017 as 15 new buildings were completed (172,500 sq m) along with three significant extensions (6,700 sq m). Completions will intensify this year – 20 new buildings in the city centre and five in the suburbs (210,000 sqm). But 65 per cent of the accommodation is already taken and this means that the spotlight is now turning to the next wave of development for completion from 2020 onwards.”

2017 was another good year for industrial with 255,000 sq m taken up but it wasn’t as active as 2016 when 265,000 sq m was taken up. This was largely due to supply shortages according to Brennan. “We expect 2018 to be another good year but the lack of good quality supply will hold back activity levels. Some opportunities will come from the changes to the CGT waiver hold period which was reduced from seven to four years in Budget 2018.”

Many of the current occupier requirements are driven by the retail sector for nationwide distribution. “It is interesting that in the UK, retailers make up 46 per cent of all take-up in the logistics sector – this was about 30 per cent eight years ago.  We are not at this level yet in Ireland but we are likely to start seeing retailers making up a larger proportion of the market in Ireland.”

She believes rental and capital values will increase further in 2018 (+16 per cent in 2017). This will be across all stock regardless of quality, size and location. “Prime rental levels are now at a stage that justifies development (€97 per sq m), so there is little difference between that and the levels that are needed for design-and-build. This means that we are going to see greater volumes of development in the short-term.”

Brennan believes that the big story of 2018 will be food and beverage and “experience” as opposed to fashion and other comparison retailing.

“This shift to food and experience retailing has been happening for a while now with the emergence of the omni-channel retail concept. Retailers are using this to allow for a seamless shopping experience – either in store or online. They don’t mind how you shop, just as long as you buy their brand. The most successful brands have embraced both formats. Even those that were once purely online now have a physical presence – Amazon bought the Wholefoods chain in the US, for example. We are moving away from the traditional store just selling goods. The bricks and mortar store now allows the consumer to experience the brand but with an emphasis on engagement.”

There are also changes in rental trends. “Different occupiers types can afford different rents,” she notes. “Food and beverage in particular can typically pay higher rents. This could mean that in the future, shopping centres may perform better than high streets because landlords will have an ability to offer adjacent units at different rents, whereas high streets generally do not have co-ordinated ownership.”

2018 is likely to be a good year again in the development land market with more sites likely to come on the market as a result of factors including the reduction in the CGT waiver period, the increase in the vacant site levy rate, and the likelihood of further institutional lands becoming available.

“I think the most important thing to mention is the policy changes that have occurred in the past 12 to 18 months, mainly under the Rebuilding Ireland framework,” says Brennan. “These policy changes will either directly or indirectly have a positive impact on the land market in 2018 and beyond - particularly for residentially focused lands. Many of these initiatives, along with other measures like the help-to-buy scheme, have already started to have an impact in the new homes market. In Dublin there are 7,400 units under construction roughly split 50/50 between houses and apartments. That’s a 34 per cent increase in the last 12 months. And there are a further 22,000 with planning with about a 40/60 ratio of houses to apartments.”

Purpose built student accommodation (PBSA) has come to the fore in the Irish property market in the last two years. There is a current supply of almost 35,000 bed spaces across Ireland, but this falls well short of the 57,000 that is estimated to be required.

“The Government launched the National Student Accommodation Strategy in July last year as part of Rebuilding Ireland,” says Brennan. “This is a positive step and shows that the sector is being taken seriously. Also, the Strategic Housing Development initiative allows schemes of more than 200 bed spaces to apply directly to An Bord Pleanála and this should help speed up further supply in the coming year. UCD has already utilised this for 3,000 bed spaces. Last year, there were almost 5,500 new bed spaces constructed in Dublin and Cork and currently there are about 18,000 bed spaces at various stages of planning and construction.”

Lisney has been tracking Dublin PBSA rents since 2014 and rents for the academic term have risen by 29 per cent both on and off-campus since then. Traditional rents in Dublin grew by 27 per cent over that period. Current rents range from €5,240 to €11,400 per bed space for the academic year in Dublin while in Cork, rents range between €3,300 and €8,200 per bed space. “We believe that rents will rise further for the 2018/19 academic year due to significant levels of demand and issues elsewhere in the residential market.”

Brennan concludes by pointing to an interesting new residential concept, shared professional accommodation. “Minister Murphy mentioned this recently as a measure that could assist with residential supply shortages,” she says.

“This is very similar to PBSA but for professionals, mainly those starting out on their careers or those who only require accommodation a few nights a week in the city. It’s similar to young professionals sharing a house but in this case, no one is stuck with the box room. Other facilities are also included such as a gym, a bar, library, games room, restaurant, cinema room, and so on. A current example in Ireland is currently under construction on Pembroke Street Upper and is called Node. We expect that this along with the build-to-rent sector will now start to become a bigger part of the market and help solve the housing crisis.”