The first quarter of 2018 has seen exceptionally strong levels of activity across almost all market sectors, according to Lisney Estate Agents 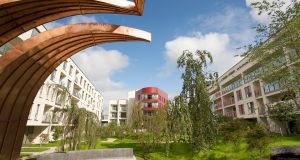 ‘Cork is featuring much more strongly, and this is something we saw last year as well,’ says Lisney director Aoife Brennan

The investment property market was exceptionally strong with total turnover of €939 million, significantly higher than previously forecast, and almost double that of the same period in 2017. Activity was also well ahead of the average for the last three years.

Offices was the dominant sector, representing over 50 per cent of the total while Dublin continued to be the most popular destination for capital, accounting for 74 per cent of the market.

An interesting feature of the market has been Cork’s performance, says Lisney director Aoife Brennan. “Cork is featuring much more strongly, and this is something we saw last year as well,” she says. “Normally Cork would account for about 3 or 4 per cent of the market but it was 9 per cent last year and this quarter it is 11 per cent. This is due largely to the sale of the Elysian, which was one of the top four transactions in the country in Q1.”

Another notable feature nationally was the increase in the average size of transactions. “It had been declining but it jumped quite significantly from just €7 million in Q1 last year to more than €15.1 million this year.”

This was fuelled by the top four deals which made up 62 per cent of transaction value during the period. The largest of these was Eir’s HQ at Heuston South Quarter, which reportedly sold in February for €175 million. The second largest transaction was also in the office sector and comprised the sale of the just completed first phase at Dublin Landings which is fully let to the NTMA. It was purchased by Triuva, part of German investor Patrizia Immobilien, for a reported €164 million.

Next comes the Hines purchase of a mixed retail, office and residential scheme on South King Street for €155 million. Rounding off the top four deals, the Elysian in Cork city centre was sold at a price significantly in excess of the guide price of €73 million.

There was also a change in the character of the buyers during the quarter, not least due to Brexit. “International capital dominated, accounting for 74 per cent of market turnover,” says Brennan. “Much of this is a result of capital migrating to Ireland from the UK, where the political and economic uncertainties are feeding currency risk and have combined to make several investors look elsewhere. Additionally, investors from the Middle and Far East are now beginning to feature and this is something we have not seen before in the Irish market.”

Outside of the city centre, Google took space in two separate locations: 4,900sq m in The Chase, Sandyford and 4,500 sq m in Blackthorn House, Sandyford. “This is the first time the company has taken space in a suburban location,” Brennan notes. “Companies are starting to move where workers are, as a result of aging staff who have to deal with things like school runs.”

Another trend is the growth in the serviced office sector. “Evidence from the UK shows that the size of the serviced office market can double in a very short period of time and this is something that is becoming evident in Dublin,” says Brennan. “Compared to 12 months ago, the stock of serviced office space has increased by 38 per cent with providers such as WeWork, Iconic Offices and IWG (formerly Regus) taking large amounts of space. In Q1 2018 alone there was almost 15,300 sq m of modern office accommodation leased by providers.”

Prime areas continue to dominate in the retail market with notable deals including the White Company acquiring a flagship store at 72 Grafton Street at a reported Zone A rate of €7,000 per square metre. Fit-out works are taking place at 32 Grafton Street where Australian retailer Smiggle is paying a similar Zone A rate.

Industrial was another sector which experienced a strong quarter with take-up reaching 72,000 sq m. This was principally accounted for by lettings, according to Brennan. “Industrial was traditionally an owner occupier market but companies couldn’t afford to purchase buildings during the recession and lettings became dominant. Overall, the market is now back at around 50:50 but lettings accounted for 75 per cent of take-up in Q1.”

Looking forward, she believes Brexit could have some unexpected impacts. “Logistics companies and exporters are focusing on their future shipping arrangements and this could have an impact on buildings close to ports,” she points out. “For example, if companies decide to ship directly to countries across Europe rather than through the UK, they might move facilities to the southern part of Ireland. That could have an influence on these markets in the coming years.”

Demand was reasonably steady in the Cork industrial market in the quarter with overall take-up levels down slightly. Despite this, demand for units greater than 1,000 sq m in prime locations close to road networks remains strong with an increasing requirement for larger units. However, supply is limited and with building costs still greater than capital values, there are no speculative developments under construction.

Activity was subdued in the Cork office market in the first quarter of the year. However, the volume of available accommodation continued to decrease, with demand for top-quality offices picking up pace. This increase in demand is encouraging construction activity with significant progress being made on new developments within the city centre.

“There are a number of very significant developments at the planning stage and we anticipate construction proceeding on several of them during the year once pre-lets have been agreed,” says Brennan.