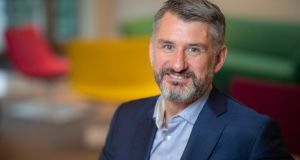 ‘The people in Aware were very good to work with,’ says Three director of public sector sales Ken McGrath. ‘They knew what they wanted and were very clear about their requirements.’

A little over two months ago, mental health charity Aware was faced with the challenge of switching to a remote working and virtual service model within a matter of days. By early March the scale of the threat posed by the Covid-19 pandemic had begun to be appreciated and when the Taoiseach announced the closure of schools on March 12th it was clear that organisations such as Aware could not continue with business as usual.

“That’s when we knew we were in a crisis,” says Aware chief executive Dominic Layden. “Even though we were deemed to be an essential service, we decided it wasn’t safe for either our volunteers or staff to continue working from our Leeson Street office. We had to close the office. We had people working in community centres around the country as well and we had to close everything within a couple of days.”

Aware turned to Three Ireland for assistance with its telephone support line. Staffed by trained volunteers, the Aware support line is a free service which is available to anyone, aged 18 years and over, who is seeking support and information about issues relating to their own mood or the mood of a friend or family member, or who experiences depression or bipolar disorder.

Aware had already been selected by Three as its charity partner for the next three years when the Covid-19 lockdown was announced. “The support line was staffed by volunteers based in Leeson Street. “We reached out to Three for help. We hadn’t finalised the charity partnership yet, but we started a conversation with the public sector sales team about a solution. The challenge was to turn everything off at one level and then turn it back on but online and virtually.”

Three went about setting up the volunteers to work remotely from their homes using the 3Connect cloud-based telephony solution. The technology offers small- to medium-sized organisations the benefit of unified communications technologies that were previously the preserve of large enterprises and the flexibility to move seamlessly from desk phone to mobile.

“It was a team effort,” says Three director of public sector sales Ken McGrath. “The people here in Three were really passionate about it. We conceptualised and realised the project within a week. The people in Aware were very good to work with. They knew what they wanted and were very clear about their requirements.”

The Three solution has enabled the charity to meet increased demand for its telephone support service. “We had already experienced a 40 per cent increase in demand in the period prior to Covid-19,” says Oliver Layden. “During March and April, we have seen a further increase of 30 per cent in the number of calls coming in. That’s where Three came in. Our volunteers download a Three app to their phones. When someone dials the freephone number they don’t know if the volunteer is based in an office or answering from their home. The volunteers have been trained on the app and the changeover was seamless.”

McGrath adds: “The volunteers use a ‘soft client’ on their phones. Their phone becomes a virtual extension of the Aware phone system. The anonymity of the volunteer is preserved, and the caller makes contact in the normal way.”

Not only is Aware able to meet current demand but the 3Connect solution is also facilitating a significant increase in capacity. It allows volunteers to be recruited from anywhere in the country as they no longer have to travel to Dublin. Space constraints have also been removed.

“We have been inundated with expressions of interest from members of the public who want to volunteer with us,” says Layden.

There have also been organisational benefits. “Quite often a volunteer might not be able to travel to the Leeson Street office because of car trouble, family issues, illness or another problem. That would have left us struggling to find a replacement at short notice. Now it’s quite easy to reach out to volunteers based in their own homes to ask them to fill in.”

That additional capacity will be extremely important in the months ahead, according to Layden. “I have no doubt that there will be an avalanche of mental health issues later in the year as a result of Covid-19,” says Layden.

Beyond the 3Connect solution, the charity partnership will see Three support Aware to achieve its aims through corporate donations, fundraising, awareness-raising, volunteering and other activities. “Aware provides a great service and it was very exciting and rewarding for us to work with them on the 3Connect project,” says McGrath. “The charity partnership is brilliant. It has created great energy and enthusiasm in our business.”