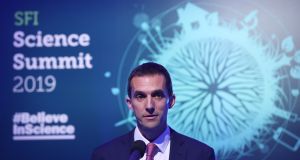 The Science Foundation Ireland Researcher of the Year Award has gone to bioeconomy pioneer Prof Kevin O’Connor. He was the first scientist to convert non-degradable plastics into biodegradable plastics, and he developed technology for biotechnological production of health-promoting chemical hydroxytyrosol. He has also founded two spin-out companies, Bioplastech and Nova Mentis.

He has collaborated with industry and developed technology to convert a dairy side stream into an organic acid, which was patented and licensed to industry. This is now being scaled and implemented in a world first “second generation dairy biorefinery”, which is being developed as part of the repurposing of the now closed Lisheen Mines in Co Tipperary

AgriChemWhey is the first dairy industry project awarded funding under the Bio-Based Industries Joint Undertaking (BBI JU) under the EU Horizon 2020 programme. The €30 million project will include the development of a biorefinery for converting by-products from the dairy industry into high-value bio-based products, including biodegradable plastics.

The new bio-economy campus will offer a single hub to enable industry, entrepreneurs and researchers to scale technologies that convert Ireland’s natural resources to products of high value for use in a wide variety of sectors.

“There was a task force established during the mine closure to look at how it could be repurposed,” Prof O’Connor explains. “It looked at how the site could be used to create new jobs. We identified an opportunity to develop a bioeconomy campus which could become a demonstrator model for the region for the sustainable use of resources.”

The campus is operated by a not-for-profit foundation involving UCD, TCD, Limerick Institute of Technology, Tipperary County Council and a number of industry partners including Glanbia. “Glanbia has a major project looking at converting the dairy side stream into green chemicals. UCD helped them develop the technology. Glanbia demonstrated a lot of leadership as well. A lot of people are involved in the project.”

In addition, he is founding director of Beacon, the SFI Bioeconomy Research Centre. “We saw the opportunity to develop a bioeconomy research centre,” he says. “We are only at the start of a lot of research into the natural resources we use including food waste and side streams from agriculture and other industries. I mean natural resources in the broadest sense. If food waste was a country it would be the world’s third largest producer of greenhouse gases. We can’t just send it to landfill to emit greenhouse gases. We have to convert it to something useful.”

His work on biodegradable plastic goes back several years. “Quite a few years ago we saw that there was a huge amount of plastic being used but the recycling rate was very low. We developed technology to convert a number of different plastics to biodegradables. People said that’s great but thought it was fine if it then ends up in the ocean because it’s biodegradable. We shouldn’t be thinking of it like that.

“If we said we had 300 million tonnes of waste and were going to drop it into the ocean we’d know it’s a bad idea,” he continues. “If we develop food packaging that is biodegradable, that is a good idea because food contamination makes it non-recyclable. If it is biodegradable it can go to composting but it should not go to the ocean.”

Scientific breakthroughs are just part of the solution, however. “We need a philosophical change,” says O’Connor. “We need technological solutions, but we also need behavioural change. We can no longer think that the throwaway society is okay. Biodegradable plastic is only good if it goes into a compost heap with the food waste. We also need to cut down on most of the food waste we generate.”

And there are opportunities in this. He points to the Just Transition scheme for the midlands as a case in point. “This has been coming for a long time. We are going to have to move away from fossil fuels. It’s about natural resources opportunities. Biomass will have to be produced closer to the factory.

“The biorefinery development is a huge opportunity. Farmers can grow things like hemp. There is a fantastic opportunity for farmers in regions like the midlands to grow and produce a wide variety of plants. Farmers are entrepreneurs and they want to get into businesses like this for economic gain. This is a great opportunity for them but we have to be careful that we exploit it without damaging the environment. We have to make it truly sustainable.”

The ultimate aim is a move to a circular economy. “The fossil economy is linear, and we don’t want to replace it with a linear bioeconomy. We want to reduce, replace, recycle and minimise impact and have a positive impact where possible. And this doesn’t just apply to rural areas. Urban areas can benefit as well through things like green roofs on builds which capture carbon and absorb rainwater and release it slowly into the sewer system, helping to prevent floods.”