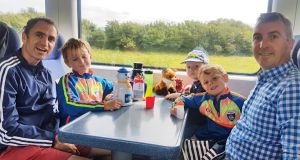 The Langan Family: “Taking the train means we can spend more time with the kids."

The Langan brothers are from Mayo and are taking the train from Westport to Claremorris for a day trip with their sons. It’s an annual outing that the fathers take their sons on, where they are allowed to choose one toy each at a toystore.

“We promised the kids we would take them for a treat after the school year. This is our third year doing it so they get to pick a toy in Smyths toys in Claremorris. We travelled this morning, we bring our bikes and go to the park there, it’s a great trip. I think my wife suggested this as an annual trip. The train is a big part of the day, everyone loves the train. It’s easier for food for the kids, too, and there are also toilets” says Dara.

“Taking the train means we can spend more time with the kids, you’re not driving, you don’t have to worry about the road. It’s more social, you meet people on the train as well so it’s good,” says Cormac.

“The train is a big part of the experience. The kids will talk about this for the year,” says Dara.

“We’ve been here since early June and we are here until August. We’ve just been in Dublin and Westport, back and forth. It’s lovely, it’s great,” says O’Grady.

“I love the train because where I live, you have to take Uber or drive everywhere so there’s not really public transportation. It’s really nice being in Dublin and taking the Dart everywhere and going across the country on a train,” said Linton.

“My father is from Westport and he came to the States in, I think, 1990. My two siblings and I were born there but we get back here nearly every year. All my cousins are here, my aunts and uncles, my grandmother, we’ve got a lot of family in Westport, I’ve spent a lot of time there throughout my life. I love Westport,” says O’Grady.

“We went in June and then came back. It’s really charming. The water is definitely very different from California,” says Linton.

“I like that the train is straightforward and easy and comfortable and you can charge your phone and there’s Wi-Fi and there’s a bathroom,” says O’Grady.

“I’ve done the car ride to Westport but I much prefer the train. It’s the scenic route, you get to see the countryside and there’s a lot of character. And the trolley comes around so you’re not sitting in the back of the car driving, it’s a lot nicer. I feel like it passes the time quicker and there’s a lot to look at. It’s amazing how much more comfortable it is than the trains we have in California,” says O’Grady.

“I’m taking the train to Westport because I want to keep my carbon footprint to zero, or as low as possible. We are trying to do it as a company but it’s really hard because we travel so much. It’s quite nice to sort of change the speed, it’s a good thing to do. For me, I just love taking trains. It’s a new love, it’s a new thing, I think we should do more of it.

"This is the first time I’ve taken the train to Westport. Westport is a jewel in the crown of the west of Ireland. It’s like a hidden secret that people are just finding out about. I’m seeing a really good friend of mine in Westport so I’ll have dinner and a drink with him and then I’ll go down to Kiltimagh where we do all of our customer service. I think the train is relaxing and easy. It’s a nice way to see a bit of Ireland and it’s good for the planet.”

“We moved here from the States back in October from Chicago. My husband is from Kilmeena and he’s been in the States for about 20 years and he just wanted to come back home. Life in Ireland is nice, it’s different, more relaxed and laid back. It’s not so hectic all the time.

"We were based in the city in Chicago. I just decided to go back with my sister and hang out for a day in Dublin and get the train back. It’s a little easier to take the train, I don’t drive anyway. It’s nice to just sit down and chill and not have to deal with the traffic. For now, Ireland is the forever home. I think the benefits of taking the train are the convenience factor and it’s comfortable for families to travel.”

“Amy loves the train, it’s much easier, she can have her lunch and do colouring. I would recommend the train for families who are travelling. It’s just easier. If Amy needs to get up and walk around she can. You can reserve a seat as well so you can make sure you’re together.

"I don’t drive. We will stay for a five nights. I’m a teacher and I teach in Dublin, so we come down every time I’m off for holidays like mid-term. You can charge your phone and everything as well. It’s a much quicker service now than it used to be, when I was in college the trains weren’t as good - it’s really improved. You have the toilets so I don’t have to worry before she gets on. It’s a lot more child-friendly. Comfort-wise it’s great, there are a lot of benefits to it,” says Margaret.

“I travelled up with my husband but he was supposed to be working, but that is after changing now. I didn’t want to be away that long, I wanted to get back home. That’s why I’m taking the train rather than waiting for him but now he is after texting me to say his meetings have been cancelled and he’s coming home this evening. But I don’t mind the train anyway, it’s an opportunity to read, catch up with stuff.

"You can get up and you can get a cup of coffee or cup of tea or go to the toilet, it’s comfortable. You have legroom and you can put your stuff down, which is why I go with the train rather than anything else if I’m not driving or my husband’s not driving. I find train travel is easy, it’s just that extra bit of space.”

“The train is the fastest option for me and it’s the most comfortable. I do prefer the train. I like how you can get up and move around, you can bring your charger, you can get tea or coffee and there’s a toilet. It’s just that extra comfort. You have more legroom as well and you can book it online as well, in advance, so you can definitely have a seat. I can work on my laptop, as well. I’m still in college so I do assignments on the train, that’s the other advantage of the train, you can work as well.”

“This is a train I’ve taken a few times because my wife is Irish and my wife’s mother’s family come from Achill island. My wife, the kids and I went to Achill about two weeks ago. My wife and the girls are still in Achill but I have to attend a conference and I’ll come back to Achill before we go back to the States.

"Instead of driving, I do prefer taking the train because it not only makes sense, financially but also ecologically. I try to keep my carbon footprint down all the time, that’s probably because I work on climate change and literature and the role of stories when it comes to climate issues and changing your everyday life. I think Irish literature has a lot of incredible examples of very environmentally conscious narrative. I’m really heartened by the generation I am meeting every day at university level in the States, I’m heartened by my kids.