The interactive experience of vibrant flavours, sights and sounds, will take residency in some of Dublin’s most characteristic venues this April and May 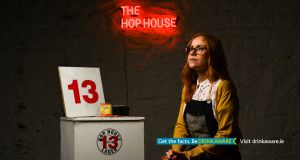 Vanessa Power will bring her funky sign painting to The Hop House, Hop House 13 Lager’s new pop-up event series, which takes place in a variety of venues across Dublin during April and May

It takes strength to change tack in life but Vanessa Power is well named for it. She spent six years working in corporate web design before a love of typography led her to her true path, sign writing.

Since setting up Signs of Power three years ago she has worked on projects for some of the world’s best known brands, as well as, possibly, your local pub.

Always creative, she had actually started a portfolio course for art college after school but dropped out. “I lacked confidence. I kept comparing myself to everyone else on the course and I didn’t feel as good as them. It didn’t help that we spent our time painting fruit and vegetables. If we’d been painting letters I’d probably have stayed.”

Instead she studied multimedia systems and moved into the tech sector, ending up as a web designer for a software multinational. It wasn’t a good fit. It seemed the only creative release she got was from endless doodling, all of which were letters. Typography has always had a particular resonance for her, possibly because her father sold signs for a living.

“He also loved sailing and used to put names on boats too. These weren’t hand drawn but vinyl lettering. In fact he worked for the company that introduced vinyl lettering to Ireland, killing off hand-painted signs. My uncle jokes that what I’m doing now is only trying to make up for what he did to sign writers.”

It’s certainly a labour of love. “I particularly love the kind of commission where I get a whole wall to myself and can do all the design and painting,” says Power.

Making the transition from corporate employee to self-employed sign painter wasn’t easy. “I gave up my job to do a sign writing course in Ballyfermot but when I got there it had been cancelled. I didn’t know what to do next but I spoke to a sign writer and he said ‘there’s no secret to it, it’s just practice’. So I started practicing.”

Trying to get paid was hard. Like many creative people, she often worked for free. “Someone told me I should stop doing that though because it devalues the craft, so I did.”

She started out going from shop to shop in Dublin looking for work, even if it was only writing on a sandwich board outside. “In the beginning they all said no but it was so good for me because going out and telling the world I’m a sign writer built up my confidence. It made me believe it.”

She got her first proper break at the Newmarket Food Market and from then on the work snowballed. “I’ve never had to advertise, the work just seems to come to me. Someone said to me early on that every job you do is a free ad for your business, so I always make sure every job is my best job.”

Her latest commission could well be. It will see her create funky sign painting as part of The Hop House, Hop House 13 Lager’s pop-up event series, which takes place in venues across Dublin during April and May.

[Tickets for The Hop House are available now from thehophouse.eventbrite.ie]

The Hop House brings together some of Ireland’s top DJs, street artists and local street-food vendors all under one roof, with interactive art stations being worked on live by Power.

“It sounds like great fun. I’m really looking forward to it,” says Power, who starts all her wall art projects by seeking out inspiration from an eclectic range of sources, sketching ideas in pencil and then working them up as painted drafts, before committing to a chosen design. The wall is the fun bit.

“What’s really nice about it is that people engage with you all the time. You always get someone telling you you’ve spelled something wrong or missed a bit. One guy recently rolled down his car window to say he loves to see a woman up a ladder doing a bit of DIY. I enjoy the interactions because sign writing is actually quite a solitary pursuit.”

It isn’t always. Last year Power participated in a global celebration of female sign writers in Chicago, known as the Pre-Vinylites. Taking time out to kick back and celebrate is important, particularly when your work is in demand.

Right now the biggest challenge facing Power is weather – she can’t work in the rain. “Though when I look outside and see it’s raining heavily, I feel like a small child who’s just been told there’s no school, so that’s great too.”

Three years into her new career she is exactly where she is supposed to be. “In my old job I had to lie down after work because I was drained. Now I spend 10 hours up a ladder and come home exhilarated. I love it.”

The Hop House will pop-up in some of Dublin’s most charismatic and vibrant venues, with the first event kicking off in The Bernard Shaw, Richmond Street on Friday, April 13th. The Hop House will then be transported to Wigwam (April 26th) and Whelans, Wexford Street (May 11th).

Tickets available from thehophouse.eventbrite.ie and include;

Brewed with 100 per cent Irish Barley and double-hopped for more taste and more character,Hop House 13 is a lager with a rich malt flavour, notes of peach and apricot and an extremely clean finish.

Double hopped means hops are added at two points in the brewing process to bring out more flavour and aroma.