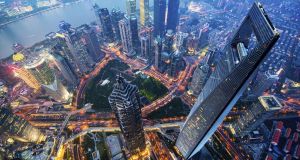 Shanghai’s domestic and international connectivity makes it an ideal location for the Expo. Photograph: iStock

The scale of the China International Import Expo almost boggles the mind. With 150,000 visitors expected from China and a range of key overseas markets over the six days, it is easily the largest exhibition of its kind to be held anywhere in the world this year.

They will be drawn there by more than 2,800 exhibitors from 130 countries, including 27 Irish companies, who will be making their pitch for a slice of the increasingly lucrative Chinese import market. Exhibitors will come from all G20 member states, a number of economies involved in the Belt and Road Initiative, as well as more than 30 less-developed countries.

With the world’s largest population, China has entered a new stage of development, which is seeing a rapid increase in consumption. Indeed, retail sales of consumer goods in China grew from RMB18.4 trillion (€2.3 trillion) in 2011 to RMB33.3 trillion (€4.1 trillion) in 2016.

That growth in consumption is driving demand for imports and China is expecting to import products and services valued at more than $10 trillion over the next five years.

The NECC is the world’s largest single-block building and exhibition complex, with a total floor area of almost 1.5 million sq m – that’s almost 120 Croke Park pitches. Facilities at the centre include exhibition halls, the commercial plaza, office buildings and a hotel. These facilities are linked together by an 8m-high elevated Exhibition Boulevard, which allows people to get around the venue very easily.

The indoor exhibition area consists of 13 large halls with each covering an area of 30,000sq m, and three smaller halls of 10,000sq m. Exhibitors and visitors have access to more than 60 fully-equipped conference rooms which surround the exhibition halls.

Shanghai’s domestic and international connectivity makes it an ideal location for the Expo. The Port of Shanghai currently maintains container trade connections with more than 500 ports worldwide. In 2017, the TEU (20ft container equivalent units) throughput of the port reached a record high of 4.02 million, growing 8.3 per cent year on year. The annual passenger throughput of Shanghai airport exceeds 100 million, with a route network covering 282 cities around the world.

For ease of navigation by visitors, the Expo will be divided into two main areas, covering goods and services. The goods section will include six exhibition areas covering high-end intelligent equipment; consumer electronics and appliances; automotive industries; apparel, accessories and consumer goods; food and agricultural products; and medical equipment and medical care products.

A new standard on conference operation and service standards in both Chinese and English will be effective from November 1st. This will establish the criteria on rating conference service providers, with operation requirements, business revenue, business credibility, and information safety all given consideration. The standard is intended to further lift the service quality of conference-service agencies in the Yangtze River Delta region.

Of critical importance is a new set of measures being rolled out by the Shanghai Customs Authority to ease the inspection process for people and exhibits related to the Expo. The measures include the creation of 38 VIP channels, and 92 channels specially dedicated to exhibitors in airports and ports across the city. Documentation needed for pets or bio-medicines brought by representatives to the Expo will also be simplified.

A big data platform which can improve the declaration speed by allowing for paperless applications and automatic declaration has also been developed for the event.