On screen: the joy, the passion and the pain driving Ireland’s entrepreneurs

Sponsored by EY Entrepreneur Of The Year 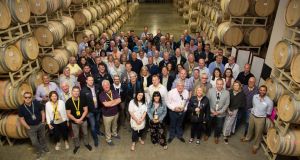 Participants and staff on the EY Entrepreneur of the Year ‘CEO retreat’ in San Francisco, the largest unofficial trade mission in Ireland

The magical thing about every successful business is that it all starts with one single idea. In the new six-part 2017 EY Entrepreneur of the Year (EOY) TV series (kicking off on TV3’s be3 on September 25th) the power of this single idea is unlocked. The series is built on stories that reveal the passion of real people, the entrepreneurs driving multi-million euro businesses and those who aren’t “long from the kitchen table where it all started.”

In episode one, finalists and childhood friends Aoife Lawler and Niamh Sherwin-Barry relate how they set up the Irish Fairy Door Company when they had only “a tenner between the two of us.” A donation of €8,000 from a generous mother who had started saving when she gave up cigarettes, was the “angel” donation that kick-started their business. It’s an inspiring tale and one that will have meaning for any viewer with dreams of their own business.

“We’re big for the underdog, we’re big for the ‘Mammys that dare to do.’ That’s kind of our thing,” says Lawler. “We sat around the kitchen table and, I suppose we just took that leap and we decided let’s do it.”

“We also believed in it. The company is something special, it’s something that children will remember forever and we’re very, very proud of that,” adds her partner Niamh.

Lawler and Sherwin-Barry are just one of the brilliant, dynamic mix of 24 companies from across the island of Ireland, who have been shortlisted for the 2017 EY Entrepreneur of the Year programme. The series follows each of them as they tell the story of their business and discuss every aspect of the pain, late nights and joy of being your own boss and what their nomination in this year’s competition means to them.

From whiskey to technology to frozen food, and everything in between, the TV series charts the 24 finalist’s journey until the final episode, when the winner of this prestigious title will be announced at a prestigious ceremony in October.

The finalists are nominated from three different categories; Emerging, Industry and International and have each gone through a rigorous judging process by independent judges. Between them, these finalists employ over 5,000 people and have a combined turnover of more than €475 million, so their selection to be part of this year’s programme is a benchmark of the quality of Ireland’s entrepreneurs today.

The series is a revealing behind-the-scenes look at these brands like Joe.ie, GoBus and Strong Roots and the stories behind their business, reflecting on the highs and lows that they have overcome. It’s the personal side of these entrepreneurs that shows that, while they are running successful businesses, they are still very ordinary people.

What makes this series very special is that it is the 20th anniversary of the EY Entrepreneur of the Year competition. Denis O’Brien, Padraig Ó Ceidigh and Moya Doherty are just some of the winners of this coveted prize over its 20-year history.

Over these 20 years, Ireland has faced almighty highs and catastrophic lows. In the first episode we hear the stories of some of the country’s top entrepreneurs and how they weathered the storms. However, it is clear the bad times have not dulled their ambition but given them a resilience and stoicism - they know now that they can survive anything.

The series shines a spotlight on what EY have been celebrating for 20 years and what Irish entrepreneurs are renowned for: ingenuity, hard work, bravery, dedication and a remarkable charm and friendliness that leaves an invaluable mark on the Irish economy and a unique impact worldwide.

Through these tales the series returns again and again to the very human element of Irish business success.

All 24 finalists will have to face the judging panel where they have a “Dragon’s Den” style interview about themselves and their business.

Viewers will experience very personal stories in the series, such as that of the three Italian-made whiskey stills that Jack Teeling of Teeling’s Whiskey named for each of his three daughters, putting his family at the very heart of his work. Or how Ciara Donlon, founder of THEYA Healthcare, was inspired to start her business, when customers came to her lingerie shop looking for post-surgery bras. Unable to source them, Donlon set about developing a bra from a blend of soft bamboo which has antibacterial properties and they are now selling around the world. Her motivation for her business was something that still gives her joy, she says, helping women at a particularly difficult time in their lives.

Through these tales the series returns again and again to the very human element of Irish business success.

Earlier this year, the finalists took part in a “CEO Retreat” - a week-long trip to San Francisco, making it the largest unofficial trade mission out of Ireland. During this so called ‘retreat’, they undergo an intense jam packed agenda of executive education, company visits in Silicon Valley and master classes in Stanford and Singularity Universities.

The finalists were joined in San Francisco by alumni of the programme. The alumni community is a vital part of the programme and has active members throughout the 20 years. What comes across so tellingly in the show is that the reverence of a nomination or win for those who have been part of the EOY programme, is remembered as a lifelong accomplishment.

EOY finds that many entrepreneurs spend a lot of time in their business, so getting away from the day job for a week is vital in giving them some fresh perspective, building bonds with other entrepreneurs and alumni and learning that whether they are in business for four years or forty, they are all going through the same challenges and ups and downs on their journey. It’s an important message that will resonate with viewers.

The six-part series builds towards the final episode on October 30th which will be the hugely anticipated gala awards ceremony with the announcement of the category winners and the big reveal of this year’s overall 2017 programme winner. He or she will go on to represent Ireland in the World EY Entrepreneur of the Year programme, in Monte Carlo.

Win or lose, the EOY finalists are now part of a movement which has celebrated the fearless efforts of Ireland’s entrepreneurs for 20 years and is much more than a competition - it is a community and a collective voice for the best of Irish business. As the programme reveals, these finalists are now forever connected to some of the most successful business people in the country, an alma mater to be proud of and treasured.

The 2017 Entrepreneur of the Year™ finalists are:

The 2017 EY Entrepreneur of The Year begins Monday, September 25th at 8pm, on be3