Jamie Heaslip and Liz Dwyer set off for a whistle-stop tour of Heaslip’s hunting grounds. 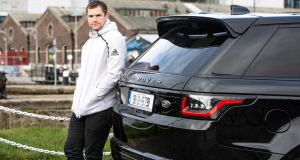 “I always have to check my car hasn’t been punked before I get into it,” says Irish rugby legend Jamie Heaslip, when we meet in Sandymount to take his Range Rover Sport PHEV out for a spin around his favourite hotspots in Dublin 4.

The pranking he’s referring to, started among his rugby team peers a few years ago and has them all watching their back for potential wind ups. “If one of the lads were held back late after training, we’d pinch their keys from the changing room and do something funny to their car. There’s been some classics, like when I filled Sexton’s car with play balls [the ones they use in kids ball ponds] or the time when we covered one of the lad’s cars entirely in Post It notes. He was running late, so only had time to pull them off a small section of the windscreen, enough so he could see. Then he had to drive around in this big yellow car flapping in the wind.”

The team have got their own back on Heaslip and have, amongst other shenanigans, wrapped his Range Rover entirely in cling film suspending it between two lampposts. Sexton has also sought revenge by filling Heaslip’s entire back yard with playballs too.

It’s weird working 9 to 5, Monday to Friday in such a corporate environment but I’m learning so much

Even though Heaslip retired from professional rugby last April, he still regularly trains at Landsdowne Rugby Club which lies in the shadows of the Aviva stadium and is the first destination on our whistle-stop tour of Heaslip’s stomping grounds.

“I still find it strange looking at the Aviva from this perspective; you get used to arriving on the team bus and going in through the back entrance, straight to the changing rooms and then out through the tunnel right onto the pitch. I still feel immense pride every time I drive by and I love seeing all the little kids going in to train for mini rugby on a Sunday. It’s all so different now to when I was a lad playing in school,” says Heaslip wistfully about his beloved sport, which he’s been playing since he was eight and had to pack in at 34 because of back issues.

He still makes an appearance on the sods at the Aviva but as a sports commentator, a gig which he’s happy to do as a sideline, but not as his main career. In fact, Heaslip, has big plans for the future and is bursting with entrepreneurial ideas and loves identifying gaps in the market for new businesses. He considers himself lucky that his background is not entirely rugby-centric. “I have a degree in Engineering, a Masters from Smurfit’s UCD Business School, I’ve studied at Harvard [the Executive Program], dabbled with pubs and restaurants [he is part-owner of the Bridge bar in Ballsbridge, and Lemon & Duke restaurant], and have been investing in various start-ups and the tech industry over the past few years. I could have kept busy and earned a decent living with all of that but I like to be challenged and I like being part of a team and am used to a fine-tuned routine.”

This is why he’s joined the corporate tech world full time since last December, a culture he finds fascinating and fast-paced: “It’s weird working 9 to 5, Monday to Friday in such a corporate environment but I’m learning so much – I thought I was pretty tech savvy but the last few months have been a massive eye opener.”

Ultimately, he would like to open up a science-led health and wellness retreat someday, a place where anyone from high-performance athletes to people recovering from injuries could come and avail of the most advanced scientific treatments and technologies to allow the body to perform better and recover faster. “There’s so much happening in the world of sports medicine, I definitely think there is a need for an operation like this but I’m just not sure where I’d launch it.” He says this as we drive by all of the empty warehouses, fields and the Poolbeg incinerator on the way to the Pigeon House Pier, and laughs when I suggest setting it up here, “I’d have some explaining to do to guests about the smell on windy days,” he quips.

We’re nipping out to the Pigeon House Pier, so Heaslip can see if the sea is calm enough to jump in for a swim later, a pursuit he swears by, “I got into it through rugby training as a way to speed up muscle recovery but it does so much more than that, not just for my body but for my mind.” He swims all year round, “with none of your wet-suit or booties nonsense,” and will jump in anywhere along the coast from Skerries to Greystones, but his favourite swimming spot is the Vico baths on Killiney Bay. “I’d love to buy a house on Sorrento Terrace one day, imagine diving into the sea off the rocks at the bottom of your garden.”

Cian Healy and I have the same taste in music, we’ve driven the length and breadth of Ireland together more times than I can count and we just always have great banter

Right now, however, his entire life revolves around Dublin 4. He and his wife, Sheena, bought a lovely period house there last year and have been enjoying the renovation journey and posting the progress on Instagram. “Between the bar, work, home and the rugby club, I can get everywhere I need to be daily on foot in under 10 minutes. It’s also great from a family point of view, Sheena and I walk with Harper [their seven-month-old baby girl] in the buggy everywhere too and we have Sandymount strand and village just on our doorstep, so I’ve no complaints, it’s a great place to live.”

When he does need to go further afield, he hops into his Range Rover Sport PHEV, which he raves about for various reasons including the fact you don’t need a key to open the door. “When I’m carrying Harper out in her seat, and laden down with sport bags, it’s really handy to not have to root for keys.”

He discusses the fuel economy, and how it’s next on their refurbishment list to install a permanent car charger in the driveway, “I reckon in 10 years we will all be looking for car chargers like the way we do phone chargers now,” and true to his mischievous nature, he also loves frightening the lads if they are standing by his Range Rover on the road by using the app on his phone. “I mostly use it to put the heat on and warm up the seats before I go outside, which is an amazing luxury on winter mornings, and possibly my favourite feature of the car, but it’s really funny to watch people jump when the car engine starts when there’s no one in it.”

Cian Healy (aka Church) is his favourite person to have in the passenger seat. “Church and I have the same taste in music – Oasis, Drake and Jay-Z [whom he named his beloved bulldog, Jay-Z, after], we’ve driven the length and breadth of Ireland together more times than I can count and we just always have great banter.”

The past year has been pretty life changing for Heaslip, between the new career, new home and baby Harper arriving, but he seems to be adjusting well to life after the number eight jersey. He’s excited about his future and can’t wait to go to Japan for the Rugby World Cup. “I’m working out a commentating deal at the moment, but just for the last few matches and the final,” which tells you just how confident he is in the Irish team making it through to the end.

This week, former Irish international rugby player, Jamie Heaslip, is behind the wheel of the Range Rover Sport PHEV (Plug-In Hybrid Electric Vehicle) as he drives to his favourite spots in Dublin.

The efficient new Range Rover Sport PHEV adds the benefits of a whisper quiet electrified powertrain to exceptional on-road performance and all-terrain capabilities.  Driven by an advanced Ingenium petrol engine and electric motor, the Range Rover Sport PHEV delivers instant torque with output of 404PS, delivering 0-100km in 6.7 seconds together with CO2 emissions from 64g/km. With a full electric charge, it has a range of up to 51km.

Designed and engineered for an increasingly carbon conscious world, Land Rover’s first ever plug-in Hybrid Electric Vehicle, the P400e, delivers a dynamic driving experience with exceptional Land Rover capability both on and off-road.

Visit landrover.ie to learn more about our most innovative powertrain yet.