In the first of a new series in association with Jaguar Land Rover, Ballymaloe’s Rachel Allen and journalist Liz Dwyer take a road trip around east Cork to visit some of the celebrity chef’s favourite local spots 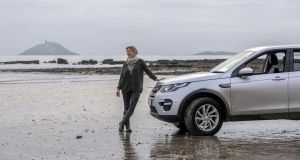 ‘I was such a city girl my parents didn’t think I’d last three weeks down here – and yet I’ve been at Ballymaloe almost three decades now,” says Rachel Allen, the celebrity chef and Land Rover ambassador, as we drive away in her Land Rover Discovery Sport. We’re starting our journey to one of her favourite spots – Ballycotton beach, a wild stretch of east Cork coastline set against the stunning backdrop of Ballycotton Island with its picturesque lighthouse.

We’re joined on the drive by Allen’s eight-year-old daughter, Scarlett, who has clearly inherited her mum’s charm and infectious spirit. From the back seat of the seven-seat Discovery Sport she keeps us entertained with local gossip and guessing games.

As we drive past country cottages, henhouses and farm buildings, Allen fills me in on who lives where, and it becomes apparent that almost the entire area between Shanagarry and Ballycotton is linked to her in-laws, the Allen family.

The original Ballymaloe farm, which spans 300 acres, was bought by Myrtle and Ivan Allen in 1948. The couple’s son Tim married Darina in 1970, and their son Isaac married Rachel in 1998. The enterprise, which includes the cookery school and a hotel, is still entirely run by the Allen family.

The cookery school is in full swing on the day we arrive  with students from all over the world shuttling between classes and cookery demonstrations. It’s an intensive course but there’s plenty of time for socialising too.

Although it’s the middle of winter and the landscape is looking rather bare, and the nearby village is almost deserted, Allen insists that life on the edge of east Cork is hectic. “There is always something going on. Between the school, the kids’ activities, the dogs, filming or writing, my schedule is non-stop.”

So Allen loves driving, not least because she enjoys the comfort and versatility of her Land Rover Discovery Sport, but also because she finds road trips therapeutic. “I’m delighted when I get booked for cooking demonstrations somewhere hours away, as I treasure long drives on my own. I find it’s almost meditative, this quiet space where I get to think things through and process whatever is going on in my life.

“At home I’m always rushing to and from the airport, doing the school run or driving around the farm. So having a solid car is paramount – and it’s a bonus my Land Rover looks elegant, too – but what I really love, apart from the heated seats in winter, is that although it may look like a heavy car, it’s so easy to manoeuvre. It requires almost no effort to drive.”

Allen has also found that as a mum of two teenage boys, 19-year-old Joshua and 16-year-old Lucca, “the best way to get them to open up about something or discuss a sensitive issue is to take them on a drive. Maybe it’s because you’re not looking at them across a table, or maybe it’s because conversation seems more casual when in cars, but if I want to get my guys to really talk to me, the key is to get them in the passenger seat.”

En route we stop by the house where Rachel and Isaac live with the kids and their many dogs. “We built our house almost 15 years ago now. This site used to be the asparagus field for the Ballymaloe farm, so I think we put it to better use,” she quips of the spectacular location, which overlooks a misty marsh and, beyond it, the roaring Atlantic Ocean.

The split-level house is a modernist take on a barn, with a cavernous open-plan kitchen, living and dining area in the centre – a nightmare to heat, according to Allen – flanked by bedrooms on either side. Spanning the entire back of the house are floor-to-ceiling windows that draw the eye out to hypnotic sea views, a panorama that is interrupted only by a twee little island with Ballycotton Lighthouse perched on top of it.

Spurred on by Marie Kondo’s new Netflix series, Tidying Up, Allen has been decluttering the house with gusto. She shows me an old family bureau she brought from Dublin just last week, to inspire her to be more organised. “I’m a disaster with life admin and tend to leave most of it to Isaac, but this year I’m going to try my best to get on top of it.”

She also points to a pile of boxes by the door. “I did all this decluttering, and then Kondo says to keep little boxes for arranging stuff within drawers, so now I’ve a mountain of boxes creating more clutter! I’m not sure I’ll ever be a highly organised person.” For someone who thinks she’s disorganised, Allen fits in an astounding amount into each day – cooking, teaching, farming, writing, filming, doing photo shoots, parenting and travelling are all par for the course.

When we arrive at our destination, Ballycotton beach, armed with buckets to collect fresh seaweed to add to Scarlett’s bath later, it’s easy to see why the windswept bay is Allen’s happy place.

“I automatically go down a few gears when I get here. Sometimes I just walk the dogs. If it’s not freezing I get in for a swim. Or I might go for a run. We often come down here for family picnics in the summer, too – or, on New Year’s Day just gone, all our neighbours and friends met here. Everyone got in for a dip, and then we drank flasks of hot port to warm up.

I love that my work allows me the opportunity to travel and see the world and new places, but if I had to choose just my favourite place in the whole world, it would be right here.”

Next instalment: Diarmuid Gavin drives some of his favourite Wicklow routes.

Designed to maximise comfort and versatility, Discovery Sport offers 5+2 stadium seating for up to seven occupants. Regardless of your journey length, Discovery Sport is designed to be enjoyed by the whole family. Start your adventure today and book a test drive at landrover.ie.