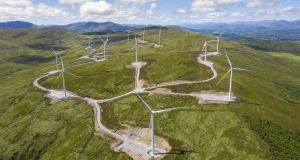 Wind energy is not new. Since crops were first milled with it, boats sailed using it and clothes dried in it, we have enjoyed this abundant natural resource.

It is, however, just 28 years since the turbines of the country’s first commercial wind farm began turning, at Bellacorick, Co Mayo.

Since then, Ireland has embarked with increasing speed on a voyage towards the use of renewable sources of energy generation, with wind power leading the charge.

Wind is now the most significant source of renewable energy in the country. There are more than 365 wind farms on the island of Ireland with a capacity of more than 5,000MW. The next big evolution in the industry will see the development of offshore wind farms around our coasts.

As well as powering more homes, in more parts of the country, this transition will help Ireland meet its energy and emission targets over the next decade, powering the path to a low-carbon future.

A leader in wind generation

The share of power generated from wind in Ireland is now the second highest in Europe, and the highest for onshore wind. Many factors, over many years, have made this happen.

They include the rise of large-scale wind farms across parts of the country, such as Oweninny Wind Farm, between Crossmolina and Bangor Erris in Co Mayo.

This joint-venture between ESB and Bord na Móna is being constructed in two development phases. The first of these has seen 29 turbines erected, with some reaching a height of 189 meters.

Located at the former site of ESB’s Bellacorick Power Station and Bord na Móna’s historic peat production lands, this mighty wind farm will have the capacity to power up to 100,000 households once phase two is completed.

ESB also recently commissioned the country’s second largest wind farm - and the group’s biggest - the 114MW Grousemount Wind Farm in Co Kerry, which has the capacity to power more than 70,000 homes, farms and businesses.

The benefit to this expansion of renewable resources goes way beyond generating electricity.

At Oweninny Wind Farm, a visitor centre will open later this year. A winner of a ‘Best Project’ award in the Irish Wind Industry Awards for 2020, the Renewable Energy Advocacy Hub will become a tourist attraction, providing an insight into the production of wind energy, the peatlands eco-system surrounding the windfarm and the history of power generation in the area. It represents a €3 million investment in the locality by ESB and Bord na Móna, linking well with the Western Way tourism offering.

ESB is also investing in the latest technologies to support the expansion of its wind generation portfolio, developing new partnerships with design thinkers, innovators and creators. This year, as part of the Free Electrons Programme, which partners energy start-ups with some of the world’s largest utilities, finalist Sterblue partnered with ESB to use its AI and drone technology on ESB’s 26 onshore wind farms.

Indeed, ESB has a number of innovative partnerships which are helping to shape the wind industry both here and abroad. These include AFLOWT, a collaborative four-year offshore wind project in Co Mayo led by the European Marine Energy Centre which will deliver a full-scale floating wind turbine for testing off the west of Ireland coastline.

It also includes a stake in Neart na Gaoithe, an offshore wind farm project on the Scottish coast which, once complete, will offset more than 400,000 tonnes of carbon emissions each year, as well as providing valuable insights into what Ireland’s future offshore wind portfolio may look like.

This is in addition to its strategic partnership agreement with energy company Equinor to co-develop offshore wind farms in Ireland.

In addition, with Covid-19 having a huge impact on local voluntary organisations and other bodies, ESB launched a special response fund for the communities surrounding its wind farms across the island of Ireland and the UK.

The aim of this fund – worth over €235,000 – is to deliver targeted services and support to those most vulnerable throughout the pandemic.

Renewables for the future

Earlier this year, a major milestone was reached in connecting 4,000 MW of wind to the electricity system meaning that, for the first time, wind energy overtook natural gas as Ireland’s number one source of electricity.

We remain committed to delivering a low-carbon energy future

This transition to low-carbon power generation takes time. Though significant strides have been made, the next step is to use the potential of Ireland’s unique geographical location to harness offshore wind.

Offshore wind farms are more challenging to develop but have more favourable wind conditions for generating electricity. As an island at the edge of the Atlantic, the development of offshore wind will help create a clean-energy future for Ireland, utilising its most abundant natural resource to power communities.

“As we support the decarbonisation of the electricity sector, we are investing in renewable energy assets across a range of technologies including solar, onshore and offshore wind,” explains Jim Dollard, ESB’s executive director, generation and trading.

“We remain committed to delivering a low-carbon energy future based on clean, reliable, affordable electricity, with wind power playing a key role in this transition. This transition will leave a positive legacy for the communities we serve, and deliver a brighter future for generations to come.”