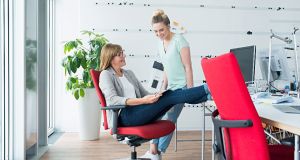 Deloitte Best Managed Companies awards are given to indigenous Irish companies across the island of Ireland that are operating at the highest levels of business performance. Photograph: Getty Images

The hunt is on to find Ireland’s best run businesses and applications are now open for the Deloitte Best Managed Companies Awards. The initiative, now in its tenth year, is open to indigenous Irish companies with a turnover in excess of €5 million, established for five years or more, and which can demonstrate superior financial performance, in relation to their peers, over the past three years.

Asavie’s products make it easier for people to connect with one another and with smart devices around them. Its 'Network-as-a-Service' platform manages the connectivity and security of IoT and mobility projects, across various different networks, seamlessly, and at scale.

The Deloitte Best Managed Companies Awards, which they won last year, is only given to indigenous Irish companies across the island of Ireland that are operating at the highest levels of business performance. It honours those businesses that are mastering their growth strategies across all key management functions and, in so doing, is unique in that it recognises the efforts of an entire organisation and not just one individual.

For Asavie, that recognition has been particularly gratifying. “Similar to many internet software firms, Asavie started out in a small garage, consumed by a big vision,” says chief executive Ralph Shaw, who founded the business in 2004.

That vision was to solve the emerging and fast-growing issue encountered by businesses of all sizes in an increasingly digital world: how to provide secure seamless connectivity across public and private networks.  The motivation to provide secure connectivity for companies’ IoT and mobility projects fuelled Asavie’s expansion into markets in Europe, the Middle East and Africa, Asia Pacific and North America.

Today Asavie has partnerships with many of the world’s leading mobile network operators, including AT&T, Three, Telefonica and Vodafone, and third-party original equipment manufacturers such as Arrow, Dell and Multitech. It has picked up other accolades along the way, including Deloitte Technology Fast 50 Awards status, and was recently recognised by the Financial Times as one of Europe’s fastest growing companies. Its growth pace is accelerating too. In the past year Asavie’s workforce has climbed from 50 to 126 people, with offices in eight countries.

“Undoubtedly the Asavie brand has benefited from the use of the exclusive Deloitte Best Managed Company accolade,” says Shaw. “The national recognition and profile accruing to the business on national press and social media has assisted on a number of fronts including rich networking opportunities and an improved ability to attract and retain top talent.”

It has provided Asavie’s management with a welcome reason to celebrate the efforts of the entire company and led to “recognition by other business leaders,” he says.

Shaw attributes Asavie’s success to two things: technological innovation and commercial execution. “The company’s founders shared a common belief, based on years of experience, that the market would need an answer to the increasingly complex challenge of providing a seamless and secure connectivity experience across all digital assets, be they machine or human operated. The Asavie PassBridge connectivity management platform, and related subscription-based services, are the technical innovations that have enabled Asavie to penetrate markets around the world, and across different industries,” he says.

Resilience in growth
All businesses face challenges but the Deloitte Best Managed Companies have shown resilience in the face of them, including Brexit, resulting in average sales growth last year of 44 per cent.

In 2017 127 companies, employing 60,000 staff, were awarded Best Managed Company status. This included 16 new winners who will now join the existing network that has built up since the scheme was first launched nine years ago.

Each has been assessed through a rigorous process that takes into consideration the complete performance of the business, looking beyond the finances to criteria such as operational excellence, strategy and human resources practice. Half of this year’s first-time winners came from the tech sector, demonstrating Ireland’s strength as a producer of exciting and innovative companies with considerable export potential.

There was also a strengthening in the number of winners in the construction and engineering sectors, many of which reported record profits, acquisitions and job creation in the previous 12 months.

For Asavie, one of the primary advantages of winning has been in relation to recruitment. “Asavie has particularly benefited from the recruitment exposure the Best Managed Company programme has given it,” says Shaw. Given the battle for talent, particularly in the tech sector, such positive profile is welcome.

Best Managed Companies know that strong organisational capability is about getting “the right people on the bus, in the right seats,” says Shaw. “Aim to have a top team of people, ideally some people who have ‘been there and done that’, people who know the road.”

Then create a clear three-year plan and ensure everybody understands it, he advises. “Create annual operational plans with clear accountability taken by functional leaders. Ensure you measure results and that the plan and its goals are understood throughout the organisation.”

Best Managed Companies must also be “customer obsessed”, he says. “To maintain growth momentum we need to be constantly looking for the next opportunity, responding with speed to customer requests and be prepared to back our hunches,” he says.

“Also, as the company is going through an explosive growth phase, it is important to communicate effectively and frequently with staff, to build the right culture. That has led to the company’s success to date.”

For Shaw, a significant advantage of being involved in the Best Managed Companies programme is the access it provides to top-notch business coaching. “The most valuable element of the programme has been the time spent with the coaches and senior management team, focusing on the key learnings to be gained from the operational successes to date, and how these can be leveraged for future growth and the expansion of the business.”

To find out more about the Deloitte Best Managed Companies Awards, and to apply to be one, see deloittebestmanaged.ie