Samantha Barry, the recently appointed editor of US ‘Glamour’ magazine, was inspired by Veronica Guerin 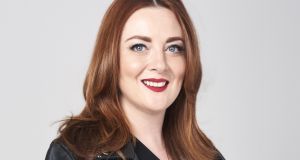 Vogue’s indomitable US editor Anna Wintour is known for a great many things, among them 6am tennis lessons and 7am blowdries. In the media industry, however, she is known as a generous nurturer of new creative talent. When she is forthcoming with praise, the world notices.

In January, when Ballincollig-born Samantha Barry was appointed to one of the top jobs in American magazines – editor-in-chief of Glamour magazine – Wintour enthused in a statement: “[She is] fearless like so many leaders of the moment. We recognised at once that Sam would be the perfect editor for a new, more ambitious era of Glamour’s future. We cannot wait to see her vision unfold. Sam is Glamour’s first digital-native editor which is to say she arrives from the future rather than the past.”

The feeling, says Barry, is very much mutual.

“She’s amazing,” she enthuses. “If you’re looking for an honest role model, you absolutely get that in Anna. Not only is she spectacular at her job, she’s very kind and helpful, and I’m so lucky to be a recipient of that.”

On what makes a good role model great, Barry adds: “They can lift you up but also be pretty honest when you’re falling down,” she says. “They’re also very generous with their time.”

Before the mighty Wintour, however, a certain Irish journalist inspired the young Samantha to aspire to a life in media.

“I remember being fascinated with news and was devastated when Veronica Guerin died,” recalls Barry. “Growing up there was this amazing investigative reporter, and that was huge for me. I walked out of the cinema after watching Cate Blanchett play her and I was inconsolable. Thankfully in Ireland there’s a plenitude of strong female broadcasters like Anne Doyle, Marian Finucane and Miriam [O’Callaghan]. I didn’t have to look far for inspiring media role models here – not every country has that.”

Barry had been fascinated with the media as a child: “Things like the peace process in Ireland and Maggie Thatcher being prime minister in the UK,” she reveals. “I used to do these little World Cup match reports in my parents’ living room during Italia ’90 and they’d be like, ‘don’t spoil the game with a report’.”

Barry was determined to study journalism, and was “devastated” when she didn’t get the points for DCU. Instead, she studied English and Psychology at UCC, and it’s now, in retrospect that she realises this was the best route into journalism for her personally.

“All I’d known for years is that I wanted to be a war correspondent or an editor,” she says. “The best thing about UCC was getting to read lots of Shakespeare, and having lots of free periods around Cork city.”

In the end, she did make it to DCU to study a Masters in journalism. Her first post-college gig was reading the news on 2FM as part of an internship. Later she became a lunchtime reporter on Newstalk, yet when the opportunity arose to train young reporters with ABC (the Australian Broadcasting Corporation) in Papua New Guinea, she could scarcely say no.

In 2014, she was then headhunted from BBC World News in London to CNN’s social media division. There, she made her mark instantly. Barry famously interviewed Donald Trump in a toilet in Miami during the 2016 presidential election – although she has clarified that her Snapchat interview with him took place in a toilet because that was the only place they could set up on the day.

Prior to Barry’s appointment to Glamour magazine, editor Cindi Leive had made the title into a jewel in Code Nast’s crown.

“As the editor of this title for 16 year, there were 100 per cent big shoes to fill,” notes Barry. “We still stay in touch and talk all the time.”

Currently, Barry is working on the all-important September issue, as well as Glamour’s annual event, Woman Of The Year. Her aim is to make its fashion and beauty pages even more diverse and inclusive, and to mix strong voices with hard-hitting news reportage.

“It’s so much more than just a magazine for me,” she states. “To be part of Glamour is to be part of a brand that has been around since 1930, and has continued to evolve.

“What’s been really nice is hearing from the audience. We did an issue around money and women recently, and I got a letter from a dad saying that he loved that we were talking about these things. Another girl in a psychiatric unit told me that she wasn’t allowed to have many things, but she was allowed have Glamour, and she carried it around like a security blanket.”

Barry has lived in New York for four years, and is constantly motivated by the city’s energy.

“I love the spontaneity of New York, and the hunger and ambition of people who live here no matter what they do,” she says.

Asked if there’s anything she misses about Ireland, she barely misses a beat before replying.

“A hot chicken roll from Spar,” she says definitively. “My friend Orla and I once spent Christmas running around New York trying in vain to make our own version.”