For food entrepreneur Alison Cowzer, family support and an MBA gave her the confidence to build her company. Now she uses her experience and expertise to mentor others 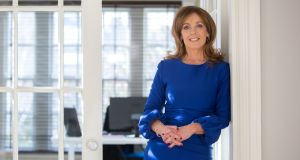 Alison Cozwer: “Whatever line of work you go into, you deserve a place at the top table.” Photograph: Rob O’Connor

The self-made man is a familiar figure in business, but what about the self-baked woman? It could certainly apply to Alison Cowzer, managing director of investment firm The Company of Food, star of TV’s Dragon’s Den and co-founder of The Eastcoast Bakehouse, Ireland’s biggest biscuit maker.

If she is following a recipe for success, it is surely her mother’s. “I grew up in Blanchardstown in the 1970s and my mother was the only woman I knew who worked. She was the first on the road to drive too, and taught all the neighbours,” says Cowzer.

“She started out working with my father, a mechanic, then she and her sister opened a ladies boutique. It grew into a chain of three and then, just as my sister and I were big enough to fit into the clothes, they closed it!”

In one way at least, her mother’s work was done: “I grew up never doubting that a woman could set up and grow a business.”

Cowzer launched her own career, in marketing, straight from school, taking the hard route and studying marketing by night – “a bloody hard slog”. A job in a start-up marketing agency gave her a business education too.

“It was like a crash course in starting a business, dealing with banks, managing clients, running events. It was totally in at the deep end.”

By her late 20s she had done everything from selling print to home heating oil. It was time for a change. “I had always been a doer but I realised I needed to be a bit more strategic about my career.”

By that stage she was married to Michael Carey, a fellow marketer. “He agreed we should remortgage our home so I could do an MBA. It was the best thing I ever did because it stops you thinking about your career and gets you thinking about what you can do for your company. It was transformational.”

It led to a senior marketing role with L’Oreal in London. While she may not have coined the brand’s famous catchphrase she certainly believes any woman with a sense of self-worth should choose her life partner carefully: “If you want to get ahead in your career, marry a feminist. You need someone who is prepared to do their share at home, someone for whom your Tuesday morning meeting is as important as theirs.”

Lay down those markers early on in the relationship, she advises. “You don’t want to be arguing over childcare when the kids are already here, so have those discussions early on. It might sound clinical to say ‘pick your partner carefully’ but it’s too important not to.”

She and Carey, who grew up over his parents’ grocery shop, share similar backgrounds and values, she says. They also work well together, returning from London in 2001 to set up Jacob Fruitfield, an opportunity that arose when food giant Nestlé was looking to divest itself of some of Ireland’s best loved brands, including Fruitfield jams and Chef tomato sauce. “We knew they just needed the kind of TLC we could give them.” Five years later they sold to Valeo Foods.

Like most successful entrepreneurs, she is comfortable with risk. “With any decision I take the view ‘what’s the worst that can happen?’ For me the worst would be illness in the family – that’s it.”

Cowzer uses her considerable expertise to boost others in business too.

“When I started out, mentoring wasn’t even a thing. But looking back I was lucky enough to work with people who always trusted me enough to give me my head and let me at it, with their support behind me, and that’s a form of mentoring in its own way.

“Today, though, I mentor a number of young people starting out in business, and I make a point of talking to people in college, in secondary school, and even recently, my own primary school, to tell them not just about the positives of starting a business, but the difficulties and challenges they will face as well.”

Although she has made plenty of it, money does not motivate her. “In all the businesses and organisations I’ve worked for what appealed to me was the opportunity to make change happen.”

That includes Women For Election, an organisation that promotes gender balance in politics, on whose board she sits.

“I’m very comfortable with change and to be honest, in the world we are living in the more comfortable you are with it, the better. Equally, when an opportunity presents itself I try not to over-think things. I’ll say ‘yes’ first and then figure out how to make it work. Someone said to me once that perfection is the enemy of progress, and I think it is just so true.”

Waiting until something is perfect leads to doubt and, ultimately, stasis.

“I’m very much an action person, and when things go wrong, as they do, I don’t dwell on them. Don’t let yesterday take up too much of today, and, as I always tell my daughters, don’t worry about things you can’t influence.”

Where you can make a difference, do, says Cowzer, who also sits on the board of a number of charitable organisations, including Goal and the Ronald McDonald House for the families of sick children. “I think if you have any bandwidth at all you have a responsibility to do something that benefits others.”

When she was starting out, BodyShop founder Anita Roddick was one of her heroes, and she still believes role models are important for women “on the basis that you need to see it to be it”.

“However, I do look forward to the day when we don’t need exceptional female role models because female success will be the norm.”

Despite her career success, she cites raising two “independent, resilient daughters to be their own person, not led by the herd” as the achievement of which she is most proud.

“For them, and for all young women, the most important thing is to be yourself,” says Cowzer. “And to know that whatever line of work you go into, you deserve a place at the top table.”