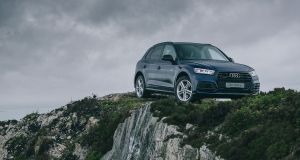 People searching for a family car with the environmental and other benefits of an electric vehicle (EV) but with none of the range anxiety and other concerns need look no further than the Audi Q5 TFSI e.

This is the plug-in hybrid version of Audi’s hugely popular Q5 mid-sized SUV. The car combines a plug-in hybrid drive with an electric motor and a petrol engine to offer the benefits of electrified motoring along with the power, efficiency, comfort and everyday practicality that you would associate with a premium Audi SUV.

With a range of up to 43 kms (according to WLTP) and a top speed of 135kph in electric-only mode, the plug-in hybrid Q5 can cover most everyday driving distances – including motorway journeys – without the need for backup from the petrol engine.

“The Q5 is extremely popular and its practicality appeals to families and others who need space and comfort,” says Audi head of marketing, Richard Molloy. “It’s now available for the first time as a plug-in hybrid and I think that will make it even more popular.”

He believes the 43 km range will be more than adequate for most people. “The majority of people use their cars for relatively short commutes, shopping, school runs and so on,” he says. “Most people’s daily driving comes in at under 40 km. But for those that think they might exceed that there is the peace of mind of having a tank of petrol in the car. You’re not using it when in the car is in EV mode but it’s there if you need it.”

Of course, people don’t only use their cars for town or suburban driving. “For longer trips you just switch to petrol mode,” he says. “I did a staycation in Galway with my family a while back. We were able to drive there using the petrol engine and then switch to EV mode for short trips while we were away. We never had to worry about the battery.”

It is not just a straight choice between EV and petrol modes, however. The Q5 TFSI e is a lot smarter than that. Hybrid is the default mode each time the car is started. In this mode, the battery charge is optimally distributed over the route to reduce fuel consumption, with mainly electric driving in urban areas and stop-and-go traffic. The system chooses between freewheeling with the engine switched off and a feature known as coasting recuperation. Coasting recuperation can recover power to the battery as can braking recuperation.

In EV mode, the car is driven exclusively electrically as long as the driver does not depress the accelerator past a certain pressure point which triggers a mode change. In petrol or battery hold mode, battery capacity is held at the current level. The driver can switch anytime by using the mode button.

“Probably what most people will do is select the hybrid mode,” says Molloy. “The engine and the software detect what is best. If you are accelerating or driving at high speeds it will switch to petrol. But you can drive at motorway speeds using the battery if you wish.”

Another advantage of the hybrid mode is the power boost it offers at higher speeds. “The battery kicks in automatically to add torque when you are accelerating,” Molloy explains. “The combination of both is tremendous when you are overtaking, it adds greatly to the overall performance of the car.”

The Q5 TFSI e’s all-wheel drive system’s intelligent control works predictively, with an array of sensors detecting road and other environmental conditions and combining this with continuous analysis of the data collected on driving dynamics and driver behaviour. This is linked to the onboard route guidance and navigation system to offer powerful driving insights along with optimised efficiency.

“The technology is really smart,” says Molloy. “The accelerator has haptic responses to indicate to the driver when to coast and save on fuel. When you enter your destination, the software will plan the route to maximise electric driving and will let you know if there are quicker alternatives if time is an issue. Some cities have congestion charges and it allows for those as well if you want to minimise cost.”

From a practical point of view, how you are going to charge the car is extremely important. “If you are driving in full EV mode a lot and have access to a charger during the day and at night you can top up the charge from time to time,” says Molloy. “It only takes 2.5 hours to charge up the battery fully with a dedicated 7.5kw charger if you have one in the house. It takes about six hours depending on your household output to fully charge the Q5 TFSI e, which is not a problem to do overnight. People should get their house checked by a professional who will carry out an assessment and do an upgrade and install a charger if required. Ideally you would charge the car overnight every night.”

He advises people to look at their lifestyles before choosing their next car. “Fully electric vehicles have a role to play, so do plug-in hybrids,” he says. “It’s up to the individual to decide which suits their lifestyle best. With a plug-in hybrid there is no need for any compromises, and you don’t have to worry about any driving limitations. It’s great for families, great for the environment, and great all round.”