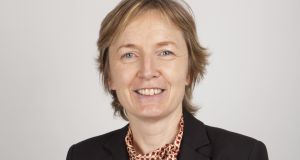 Paula Fagan, CEO, LGBT Ireland: "I can see that much progress has been made in recognising the diversity within Irish society and becoming more inclusive of our Lesbian, Gay, Bi and Trans (LGBT) citizens."

The question of how far we have come is usually considered in terms of equality. And I suppose we have indeed come some distance from the days of criminalisation, marginalisation, exclusion, shame and stigma. That is not to say, however, that homophobia doesn’t still pervade in dark corners and in darker minds, in mean streets and even meaner social media. They do, we need only watch the most recent online harassment of transwomen occasioned by a tweet from Harry Potter author, JK Rowling, to understand that. Others will speak to that.

As a historian I want to speak of our histories, as only in understanding the past can we fully appreciate how far we have come. Who are the foremothers and forefathers of our history? As a historian of Irish revolutionary women, I found in my research that a number of the women active in what Countess Markievicz termed the three great movements, the national movement, the women’s movement and the cause of Labour, were also involved in same sex relationships. LGBT narratives from all periods of Irish history need to be told, and it is heartening to see a new generation of historians delving deep into these histories, in no small part because of the existence of a major archive, the Irish Queer Archive, housed in the National Library of Ireland. Our histories are vital to our national story, to our sense of selves, to understanding that we have always been here; they should and will be told.

Mary McAuliffe is a historian and lecturer in Gender Studies at UCD. Her biography of Margaret Skinnider is available from UCD Press (Life and Times New Series).

Ireland’s Gender Recognition Act, introduced in 2015, is one of the most progressive in the world, allowing those over 18 to be recognised by the State as their self-determined true gender. However, the legislation does not include those under 18 or those who are non-binary (people whose gender is neither male nor female). Greater numbers of trans people are being visible and sharing their stories, and the representation of trans lives in the media and the arts is slowly becoming more positive. Ireland still has a long way to go though, in seeing progressive legislation translate into real improvements in the everyday lives of its trans citizens. We are still waiting far too long for appropriate, person-based healthcare; we face many barriers in accessing employment and in being ourselves at work; we are vulnerable to hate and discrimination; and our lives are not represented in school curricula and young gender non conforming people are not being adequately supported in our schools.

Trans Equality Network Ireland (TENI) is a non-profit organisation supporting the trans community in Ireland. TENI seeks to improve the situation and advance the rights and equality of trans people and their families.

I’ve worked in LGBT Helpline work since 2001. Over those two decades, I can see that much progress has been made in recognising the diversity within Irish society and becoming more inclusive of our Lesbian, Gay, Bi and Trans (LGBT) citizens. This progress is most tangible to me in the calls we receive from parents looking for support when their child has ‘come out’ to them.

When I started in helpline work, parents who contacted us did so because they were deeply upset about their child being gay, lesbian, bi or trans. The reason for their distress was twofold. Firstly, with no prospect of marriage or of having a family, that secure, recognisable future they had expected for their child seemed lost to them. They were also scared for their child’s safety, sure that they would be bullied and harassed because of being LGBT. Now, when parents phone our helpline, they are often already aware and somewhat comforted by the rights and recognition that now exist for LGBT people, but still fear that their child will have a more difficult life and worry for their safety.

This speaks to the prevailing stigma that still exists towards LGBT identities and the importance of building on the significant progress that we have made, to ensure that future generations of parents of LGBT children, won’t need to phone a helpline. They will be able to love, support and celebrate their children for who they are.

The intersectionality of sexuality, gender identity and ethnicity can often be a difficult place for LGBT+ Travellers and Roma who can experience compounded discrimination and isolation. It remains a challenge for LGBT+ Travellers and Roma to find safe spaces to express their sexual orientation, gender identity and ethnicity, including within the LGBT+ Community.

“How far have we come? This is not a term any LGBT+ Traveller alone can answer, it is however, in itself a direct challenge to the collectives and allies who seek to make our spaces ones of equality, honesty and celebration to ask themselves.

Ireland has experienced rapid social change in the last 30 years which has transformed life for LGBT+ people here. At the same time, the treatment and prevention of HIV has changed radically - so much so that we now have all of the tools we need to end HIV by 2030 - a goal that HIV Ireland has signed up to as part of the Fast Track Cities initiative, which aims to put Dublin on the World stage for arriving at zero new transmissions.

The tools that can make this happen include Pre-exposure Prophylaxis, also known as PrEP, a medication which can be taken by HIV-negative people before and after sex, which prevents HIV acquisition by 99 per cent. Another being treatment for people living with HIV, which has improved to such an extent that those on effective treatment will not only live long and healthy lives but also cannot pass on the virus to anyone else - a game changer in stopping HIV and dismantling HIV-related stigma.

However, we’ve still got a way to go. In Ireland, gay and bisexual men are disproportionately affected by HIV, accounting for more than half of all new diagnoses annually. In an effort to respond to this we devised the MPOWER Programme at HIV Ireland, a peer-driven programme which aims to empower gay and bi men with sex-positive, judgement-free and harm-reduction based responses to sexual health and wellbeing needs.

To get to zero and utilise tools like PrEP and HIV treatment we must first start with testing - a key component which requires significant investment across Ireland.

At MPOWER we developed community-based rapid HIV testing in bars, clubs and LGBT community centres, which offers a low-threshold opportunity to know your HIV status in less than a minute. Our trained peer outreach workers can then link guys that receive a negative result into a PrEP service or into treatment clinics for those who test positive. COVID-19 had paused our rapid testing service, but we’re glad to have been able to return again (from our office space) just in time to mark Irish AIDS Day which took place on Monday, June 15.

HIV Ireland’s MPOWER Programme is a suite of peer-driven community-level interventions which aim to achieve a reduction in the acquisition of HIV and STIs and an overall improvement of sexual health and wellbeing among gay, bisexual and men who have sex with men (gbMSM).

Marriage Equality was a defining moment for the LGBT+ community in Ireland, and this year, the Children and Family Relationship Act was the next step in achieving equality. One of the problems we now face is the lack of understanding and empathy towards all members of our LGBT+ Community such as our Trans community, we need to inform ourselves of the issues still facing them. The reality is that young and old LGBT+ community members are still being bullied for who they are. They are being marginalised in parts of our cities, towns, and villages. These are the reasons why Pride is as relevant and important in 2020 as it was in 1969.

“Nothing changes until you challenge the status quo. Culture is an adaptive term and culture is all encompassing, meaning it reflects the activities of all its stakeholders. LGBT+ Travellers are stakeholders too.”