As they celebrate 25 years together, the band’s lead singer Shirley Manson explains why they’re as relevant today as they were in the ’90s 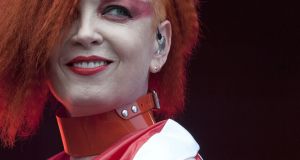 Shirley Manson at Electric Picnic in 2018. Photograph: Dave Meehan for the Irish Times

Shirley Manson is more surprised than anyone else to find she’s still immersed in Garbage. When she joined up with Butch Vig, Steve Marker and Duke Erikson back in the mid-1990s, they weren’t really looking too far into the future, even picking the most disposable name they could think of, a sure sign that this was not meant to last.

“I don’t think anybody expected, including ourselves, that we’d still be here 25 years later, it’s an extraordinary surprise for everybody,” says Manson, over the phone from Los Angeles, where Garbage are getting ready for yet another romp around the world, including a date at Iveagh Gardens on July 18th.

“We’re so looking forward to coming back to Dublin,” says Manson. “We hadn’t played there in so long, and we finally got to play a gig last year, and so to come back a year later feels like a real privilege.”

I bet she says that to all the cities.

Manson puts the band’s longevity down to the unlikely chemistry between these four very disparate members.

“It’s funny because if you think of the way we came together, the odds of us actually having that kind of chemistry are really low, but for some reason it’s been the perfect mix of not only personalities but talents.”

Garbage had a more unconventional origin than most other bands. The band’s drummer, Butch Vig, had found fame as the producer of Nirvana’s Nevermind, but he and fellow producer Duke Marker, who had played together in several bands, wanted to put together an outfit that would blend a grungy rock sensibility with new electronic techniques they were discovering through their work in music production. They had guitarist Steve Marker on board – all they needed was a singer with all the qualities of Debbie Harry, Chrissie Hynde, Patti Smith and Siouxsie Sioux rolled into one. Can’t be all that hard. When they came across a video of Manson performing with her band Angelfish, they knew they’d found the right mix of sweetness and strength.

“I think it was helped by the fact that we were very forward-thinking. We were treated with the lot of scepticism at the beginning – we were perceived as some sort of sinister brainiac move by a seasoned producer. When in fact Butch is probably the least cynical person I know. One thing that the band did have in its favour was that it had this understanding of where technology was going, and we embraced that right from the beginning. We were often called out for it, but now it’s become the standard.”

Their self-titled debut, released in 1995, put them at the vanguard of a new altrock sensibility, and spawned such hits as Queer, Only Happy When it Rains and Stupid Girl.

Being in Garbage has entailed a lot of travelling for the Scottish singer – beginning with a trek to their remote studio in the snowy wastes of Wisconsin to record their debut album. Since then it’s been all go, but Manson has never felt the need to complain.

“We’ve been very lucky because a lot of bands tend to have success where they’re based, and then it’s a little bit harder for them to break out elsewhere, but we were lucky enough to have a following everywhere, and so we keep getting to go to really wild places. But travelling is my favourite thing to do. I’m really built for it, whereas I think it’s a lot harder on my bandmates.”

Presumably the three Americans in the band still enjoy doing it too, because they’re already working on the band’s next album, the follow-up to 2016’s excellent Strange Little Birds.

“I’m assuming that they are doing it because they want to do it,” reckons Manson. “I’m certainly not forcing anybody to do anything that they don’t want to do. They’re big boys and if they don’t like it they speak up, but nobody has spoken of any dissatisfaction.”

There was a time, though, when it looked like Garbage had reached the end of the road, and it was time to shut down this brainy musical experiment. After finding success with their eponymous debut and its follow-up, Version 2.0, the band found itself at the forefront of a new altrock vanguard, and even the producers of James Bond came beckoning, the band obliging with the Bond theme The World Is Not Enough. By the mid-2000s, it seemed as if the world had had enough of Garbage, and the band – afraid to admit they were falling apart – called an indefinite hiatus. But the pull of the music proved too alluring, and after a seven-year break they were back in the studio to record their fourth album Not Your Kind of People.

By that stage, the landscape of rock music had changed again, and technology had altered the way bands record and release material, and how they sustain their careers in a world of streaming and instant musical gratification.

For a while during the noughties, as revenue from record sales tailed off, it seemed being in a band was a pointless exercise in tilting at windmills.

“I’ll be brutally frank, the economics around making a record and being in a working band are brutal, and it’s very difficult to figure out a way of making a living and travelling. It’s so much cheaper to travel and perform for a solo artist. So I’d be lying if I said it wasn’t a challenge. Record companies in general stay away from signing bands because they’re too expensive. But I’ve always been in love with bands, it’s just been my thing for whatever reason. And I’ve always enjoyed the alchemy that exists between different human beings. You produce something very different with other people than you would on your own and I find that fascinating. I’ve always found the fantasy of a band really appealing, so to me it’s worthwhile sticking with what we have. But yeah, it’s getting harder and harder for bands to simply survive, but if it was easy then everyone would be doing it, right?

‘No craving to be famous’

“We’re all lucky in Garbage that we’re not obsessed with being famous. We’re not really interested in that game at all. We had our taste of it. It was unpleasant and it created havoc in our private lives. We have no craving to be famous, and when you remove that craving for pop success, you can exist as an artist and that is such a relief.”

The band has recently celebrated the 20th anniversary of Version 2.0 with a special-edition re-release, and celebrated their own career with a highly acclaimed book, This Is the Noise that Keeps Us Awake. Manson is now a heroine to a whole generation of young musicians, so it feels strange – but somehow natural – that Manson is looking to the future, with a new Garbage album due in 2020, and more touring and travelling to follow.

“As a woman you’re told you have no agency past 25. And then I’m on tour with Debbie Harry and she’s 71. She’s two decades older than me and I’m like, wow! All right, mama! If you can do this there’s no reason why I can’t do it. I’m so grateful to all my heroines like Patti Smith, Debbie Harry and Chrissie Hynde, all these amazing women who have kept going and bucked societal expectations and societal constraints. But they’ve done that, and I’m a free a woman because of it.

“Although that takes a huge toll, and I’m amazed that they do it with such good grace and artistry. Because it’s a difficult time for women still, as seen by the #metoo movement. Things are very worrisome. I’m not entirely sure why the world hates women. I’m very confused and perplexed by it. But the statistics are so alarming. Clearly there’s something at play in society that we really need to address. That includes all women and all men. We need to figure this out because it literally is poison for everyone. If one in three women experience domestic abuse or sexual violence at some point in their lives, that speaks of something really sinister at play in our culture.”