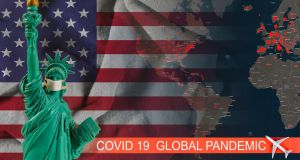 Irish and many EU citizens were banned from travelling to the US, employees were forced to work from home and companies on both sides of the Atlantic scrambled to find new ways to do business.

As we entered 2020, the trade and business relationship between Ireland and the US had hit unprecedented high levels of investment flows in both directions. Investment into the US has particularly gone from strength to strength in recent years with Irish companies in the US employing over 110,000 people. In Ireland, over 160,000 are directly employed in more than 700 US firms.

As with any relationship there have been bumps in the road, most recently with the imposition of tariffs on several important exports from Ireland into the US.

Then in March, the unthinkable happened and a global pandemic forced the world to pause.

Irish and many EU citizens were banned from travelling to the US, employees were forced to work from home and companies on both sides of the Atlantic scrambled to find new ways to do business.

Sean Davis, regional director of Enterprise Ireland’s (EI) North America office, says he has seen first-hand how the travel ban into the US has been damaging. “The fact that you can’t travel in unless you’re a resident has hurt us.”

Meanwhile, multiple reopening strategies across the country have been hard to navigate and understand.

“We have always had the analogy of 50 states/50 countries but it has definitely become that in terms of the reopening approaches. For example, you have a highly controlled, monitored and data-driven New York but a much more open approach in other parts of the country,” he says.

While most EI companies have not had significant supply chain issues, some of the large multinationals they’re selling into in the US have.

“That’s caused disruption. If you can’t get part A, then you don’t need part B, which might be coming from the Irish supplier. Then there is the economic uncertainty – how do you plan when you’ve got such uncertainty,” he says.

He says buyers are putting new projects on hold, while the lack of trade shows, conferences and seminars has proved a negative for industries that like to get a touch and feel for products. “They will have to pivot quickly,” he says.

“Irish companies are very nimble and adaptive and show willingness to go the extra mile. They are good at not selling what they have but selling what someone needs,” he says.

Many Irish SMEs were hit particularly hard during the pandemic, Carin Bryans, president of the American Chamber of Commerce and managing director of JP Morgan Ireland says. Businesses having to adapt to enable staff to work from home proved a major challenge.

“Whilst much of this related to technology enablement, there has also been a huge focus on ensuring that the same controls around fraud and cybersecurity risk and data privacy could be maintained in a remote working environment. The second major challenge has been supporting staff, many of who have had to juggle work, childcare, homes schooling and supporting cocooning relatives,” she says.

Putting Covid-19 to one side, a highly competitive environment for foreign direct investment worldwide is a constant challenge, says Anna Scally, partner, head of technology and media and fintech lead at KPMG in Ireland.

“It’s to their continued credit that both government and IDA are acutely aware of this and are constantly refining our approach. Inevitably, issues such as protectionism and policies aimed at discouraging outbound investment from the US need to be carefully monitored. However, US business has also been clear that to trade and compete globally, international operations such as those we have in Ireland are vital to their continued success and in many cases their global, technological and sectoral leadership,” she says.

Many US corporates have been highly impressed by Ireland’s reaction to the pandemic.

“From a JP Morgan perspective, our ability to quickly adapt to remote working, remain highly productive and deliver for our customers during these challenging times has further strengthened Ireland’s reputation. This sentiment is also shared by many other sectors within the AmCham community. Services have been delivered largely uninterrupted, and production has been maintained and in some cases has increased to meet growing demand, particularly in healthcare-related businesses. Our ability to adapt, work productively and maintain critical supply chains during the crisis has demonstrated great resilience in the eyes of corporate America,” Bryans says.

Big picture benefits of stability, consistency in tax policies, social cohesion and a commitment to issues such as education and quality of life matter a lot to Ireland’s trading partners in the US – to the businesses themselves, when making location choices, but also to their leadership teams and employees, Scally says.

“In both cases Ireland scores very well. My only caveat is that we can’t take our eye off the ball – Ireland’s success has others looking to emulate our achievements. Thankfully our political leadership and policymakers are well aware of this.

“It will be important to ensure that our new government not only builds on Ireland’s strengths but also addresses the areas which need additional investment, like broadband and housing,” she says.

Having entered into this crisis in a very strong position, as businesses recover, the US market provides great expansion opportunities for Irish companies. “With 12.1 per cent of all US investment flows into Europe going into Ireland, we remain an important transatlantic hub for US businesses wanting to access the European market and beyond,” Bryans says.

Sectors where Ireland is strong such as tech and pharma are core to overcoming many of the challenges Covid-19 presents – in many ways Ireland is well-placed to make the most of the opportunities, Scally says.

“Trade relations are highly positive at company level in particular, where both US companies in Ireland and their Irish counterparts across the Atlantic are operating very effectively and just getting on with business,” she adds.