The face of Ireland is changing

With advances in safe, non-surgical beauty procedures, treatments such as injectable fillers are becoming as much as part of routine maintenance as make-up and skincare 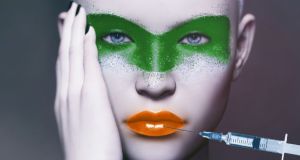 A stroll through Dublin will reveal more medically augmented faces than ever before. Photograph: iStock

The face of Ireland has changed rapidly in the last five years, and aesthetic norms and non-invasive cosmetic procedures have evolved in tandem. A stroll through Dublin will reveal more medically augmented faces than ever before. With advances in non-invasive, or non-surgical, procedures like injectable fillers, facial augmentation has been democratised, and a generation of mostly young women increasingly sees these sorts of procedures as routine maintenance.

As a nation, we have long had a fascination with beauty, and we express it with our wallets. According to 2017 figures, Ireland is the second largest consumer of fake tan in the EU. Sweden took the top spot, in case you were curious. Our small island is in many ways a bread basket of the European beauty market; we punch significantly above our weight in terms of revenue, and the industry here continues to grow. According to consumer and market data site Statista, revenue in the cosmetics segment amounts to €129.9 million in 2019 and the market is expected to grow year on year. The UK and Ireland are also key exporters of cosmetic products and ingredients. L’Oréal (with luxury and mass brands as varied as Lancôme, Urban Decay, Kiehl’s, L’Oréal Paris and Garnier under its umbrella) was still the leading player in the Irish beauty and personal care industry last year.

It is not hard to find data which elucidates Ireland’s thriving interest and trade in cosmetics, namely make-up, skincare, bath and body products, and fragrance. Though that interest is increasingly extending beyond what we put on our faces and bodies to what we put into them, the aesthetic services industry is significantly harder to track. Part of the problem in an Irish context is that there is no regulating body overseeing aesthetic procedures like fillers, despite their explosion in popularity, so no one is quantifying the data. The HSE keeps track only of medically indicated procedures that fall under the remit of plastic surgery – procedures like reconstructive surgery after mastectomy. To better understand trends in the sector, we have to make do with extrapolating from the data coming out of the UK.

The British Association of Aesthetic Plastic Surgeons (BAAPS) releases an annual audit compiled by former BAAPS president Rajiv Grover each year, tracking industry trends. According to Grover, “The non-surgical sector is rife with lax regulation and unethical promotions and the public must remain vigilant as ‘non-surgical’ does not mean the same as ‘non-medical’. These treatments have risks as well as benefits and patients must choose their practitioner very carefully.”

This is also true in an Irish context. Fillers are classed as a ‘medical device’ rather than a drug, and therefore anyone can legally administer them here, unlike Botox, which must be prescribed and administered by a doctor or, according to Nicola O’Byrne, chairperson of DANAI, The Dermatology and Aesthetic Nurses Association of Ireland, a nurse prescriber. The unregulated status of fillers is what has led to the huge increase in non-medical venues like hair salons and mobile vendors administering them.

The UK Save Face Consumer Complaints report registered 934 patient complaints from consumers regarding unregistered practitioners last year, 616 of which were in relation to dermal fillers, and 224 for administration of Botox. Anecdotally, Irish clinics we approached reported sharp increases in the numbers of patients coming to them with botched fillers done elsewhere, looking for the dissolving agent Hyalase, which can only be administered by a doctor or aesthetic nurse. As a result of this, anyone who had botched fillers administered by a non-medical professional cannot return to their original vendor to have them dissolved, so they end up knocking on the doors of the reputable clinics that they should have visited in the first place.

Fillers and Botox – the form of botulinum toxin which causes muscle paralysis and consequently smoothing of the wrinkles and lines in areas like the forehead – are among the most popular treatments. This is in part because advances in both have allowed clinics to provide legitimate alternatives to surgery in some cases. In the UK, brow lift surgeries were down 15 per cent last year for women and 4 per cent for men. Grover suggests this is due to the use of Botox as a treatment but perhaps more importantly, as a preventative.

Fillers are increasingly being used for facial augmentation – adding a discernible jawline or cheekbones where there was previously very little definition or none, and changing the shape of noses. Non-surgical rhinoplasty, as this procedure is called, doesn’t work for everyone, but for those with bumps in the bridge of their nose or downturned noses, the procedure makes an instant and transformative difference without the need for or cost of surgical intervention. Of course, the effects are temporary and must be maintained.

Tear trough filler is also increasing in popularity. Mrs Sabrina Shah Desai, a leading Harley Street ophthalmic plastic reconstructive surgeon known for her patented tear trough filler technique, affirms that fillers are increasingly being seen by patients under 50 as preferable to surgical options like lower blepharoplasty – a surgical procedure by which excess skin is removed to reduce wrinkles or bulges under the eye.

Some surgical treatments, however, still do not have non-invasive alternatives that can offer comparable results. Despite the increasing popularity of fat-freezing treatments like CoolSculpting, which freezes fat cells so that they are broken down and processed by the body, apparently never to re-form in the treated area, liposuction in the UK was up 9 per cent for both men and women in 2018. Clinics report that clients often tend to have unrealistic expectations of fat-freezing treatments, and those who want dramatic change still have to opt for liposuction.

Machine-led non-invasive treatments are also gaining popularity. At Amara Clinic, a leading aesthetic clinic on Dublin’s Merrion Square, a treatment known as the hydrafacial saw a 61 per cent increase on last year. It is a machine treatment that resurfaces skin and essentially gently vacuums blockages and sebum from pores before delivering a serum cocktail into the skin which plumps and invigorates it, with immediately visible results. Medical micro-needling treatments, which entail stimulating collagen production in the skin through micro-trauma (in the form of pricking the skin with tiny needles) are up 64 per cent on last year at Amara. These trends are reflective of increasing popularity in these sorts of non-invasive procedures countrywide.

With increasing interest in aesthetic treatments generally comes increased concern about who is accessing them, and why. Body dysmorphic disorder, or BDD, is a mental-health condition most often seen in teens and young adults, characterised by obsessive focus on perceived flaws in appearance. These flaws are often unnoticeable to other people. BDD sufferers isolate themselves, experience serious distress and anxiety, and can compulsively seek cosmetic procedure after procedure to “fix” the physical characteristics they perceive as the cause of their unhappiness.

According to Dr Louise Clarke, director of the Consulting Clinic in Dublin, BDD is equally common in men and women, and affects 1-2 per cent of the population. According to Clarke, “In people with BDD, the cosmetic procedure does not ‘fix’ the underlying strong core beliefs. These treatments don’t usually make their appearance concerns disappear, often the level of distress and degree of concern remain unchanged, and in some cases, the appearance concerns may get worse and in turn cause increased distress.”

According to research carried out by US-based BDD expert Dr Katharine Philips, 73 per cent of BDD patients cited their skin as the area that caused them most anxiety and unhappiness. Responsible aesthetic practitioners are highly aware of the signs of BDD; reputable clinics routinely screen for it and refuse to treat potential patients who show symptoms of body dysmorphic disorder. Vigilante practitioners have no qualms, meaning that sufferers turned away by legitimate clinics will often go to unregistered, inexperienced vendors for potentially dangerous treatments like fillers.

However, the vast majority that augment their appearance just have something they dislike about their appearance and seek a treatment or course of treatments to change it without orienting their whole happiness around getting the procedure. For them, the advent of machine-led skin resurfacing and regenerating treatments as well as the availability of good-quality injectables provide safe, impermanent ways to change the way they look.

The days of getting Botox but pretending you don’t are timing out. Lorna Spaine, a Dublin-based fashion influencer and part-time receptionist, is one of a generation of younger women who are completely open about having non-invasive cosmetic procedures. She says of her lip fillers: “I think they boosted my confidence massively. I felt a lot more fresh-faced with no make-up on. I felt they levelled out the proportions of my face . . . Luckily I haven’t had to deal with much negativity. I think people are a lot more understanding these days . . . times are changing and people are a lot more open-minded towards another person wanting to change something about themselves once they are doing it from a healthy mindset and for the right reasons.”

This openness is positive – it suggests that young women are not ashamed of their decision to change the way they look, but it also drops the veil of ignorance around natural and augmented beauty. We engage less in comparison when we know that what we envy can be purchased for a fee. As Amy Winehouse famously (reportedly) said to a fan who asked whether her iconic beehive hair piece was her own hair – “What d’you mean ‘is it mine’? I paid for it.”

Fabulous Pharmacist gets the Relife treatment

The next generation of skincare treatments from Boots

Also in Future of Beauty

The future of beauty: 3D printing?

The face of Ireland is changing

The five most popular cosmetic treatments in Ireland

Getting under the skin of ‘cosmeceuticals’

Irish men are keeping up appearances

The most talked-about non-invasive tweakments

Heads-up: the many treatments for hair loss

Use less powder, prep your skin and other tips from beauty experts

The ugly face of the beauty industry

The cutting edge of surgery

Have you had your fill?

Take the weight off . . . your moobs, cankles and double chin

The beauty of DNA

Surgical or non-surgical – which facelift to choose?