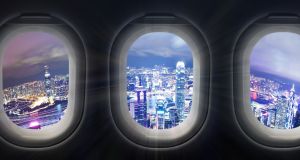 Hong Kong is seen as a major threat due to major Chinese banks moving in to fund leasing companies there. Photograph: iStock

The latest figures from the International Air Transport Association (IATA), published in December 2017, have forecast net profit for the industry of $38.4 billion for the coming year. Passenger numbers are expected to increase to 4.3 billion in 2018, with passenger traffic, measured in revenue passenger kilometres (RPKs), expected to rise 6 per cent, down slightly on the 7.5 per cent high of 2017 but still comfortably ahead of the average of 5.5 per cent over the past 10 years or so.

In addition, according to the KPMG Airline Economics: The Aviation Industry Leaders Report 2018, passenger revenues are expected to grow by more than 9 per cent to $581 billion in 2018, driven by continued global economic growth and benign interest rates and other positive market conditions.

The rude health of the global airline sector is good news for the aviation finance industry generally and for Ireland in particular. According to the latest estimates, about 10,000 aircraft out of a global fleet of 25,000 are leased, and 6,500 of them are located in Ireland.

Ireland’s preeminent position in the industry dates back to the foundation of GPA by Tony Ryan in the 1970s. “Tony Ryan really created this industry,” says Aergo Capital chief executive Fred Browne. “I am a GPA alumnus and so are many of the other industry leaders. Ireland has been massively influential on the worldwide industry. GPA became GECAS and every major aviation leasing company in the world now has an operation here.”

That legacy has been very important, according to Deloitte partner Brian O’Callaghan. “Ireland has had first-mover advantage in the industry dating back to the foundation of GPA,” he says. “But it’s to everyone’s credit that Ireland has maintained that position up until now. Ireland has the tax, legal, commercial and infrastructure in place for the industry. The support base here is second to none.”

Tom Woods of KPMG points to the importance of GPA to the global industry. “Four of the world’s top five leading companies originated from GPA,” he says.

But there are other regional locations pitching for a slice of the action, he notes. These include the United Arab Emirates and Hong Kong. Abu Dhabi is particularly active in trying to attract leasing business while Dubai Aerospace acquired Dublin-based AWAS last August, giving the combined entity a fleet of about 400 aircraft with a value of more than $14 billion.

Hong Kong is seen as a particular threat due to major Chinese banks moving in to fund leasing companies there. US tax reform could also make centres like New York more attractive for leasing business, but most commentators agree that Ireland’s inherent advantages will make it very difficult to topple as the global leader.

“Another key strength is our people,” says Woods. “We have seen UCD Smurfit School establish a masters degree course in aviation finance. This is now in its second year and the feedback from the first year was extremely strong. The course is supported by a number of the largest lessors. KPMG is also a supporter. A lot of industry veterans are participating in the course, which is meeting the industry’s future demand for people. It is attracting students from across the world.”

Fred Browne compares the course to a football club academy. “Patrick Blaney, my old boss at GPQA, runs the course. He is doing a tremendous job of building an excellent pool of talent to meet the future needs of the industry here.”

Another one of Ireland’s advantages is the country’s extensive network of double taxation treaties. These ensure Irish-based companies do not have to pay taxes in countries which have treaties with Ireland.

According to PwC’s Brian Leonard, it is vitally important the Government keep adding to this network.

He cites the example of Kazakhstan, which is a growing market for aircraft. A new tax treaty is now in place which will assist the Irish industry win business there. “Indonesia is another market with huge growth potential and we don’t have a treaty there yet. That’s an example of where we could do with a treaty.”

He also points to continued interest in the industry from China and the Far East, with investors there putting money into existing companies or setting up new lessors. Their proximity to markets like Indonesia make it particularly important for Ireland to negotiate new tax treaties.

At the other end of the tax spectrum, Tom Woods says the personal tax regime in this country is important if Ireland is to continue to be attractive to the industry. “The Government has introduced some measures to make our personal tax regime more attractive and this has met with some success,” he notes. “But the headline rate is still very high and there is a bit more to do there if we are to attract the calibre of people to come here to manage these businesses in future.”

Interestingly, another tax issue may actually work in Ireland’s favour. The OECD BEPS (base erosion and profit shifting) project has brought in new rules governing where multinational companies pay tax. Broadly speaking, the tax is paid where the company has substance. “This could be good for Ireland,” says Brian O’Callaghan. “You have to have substance in a country and Ireland is a good place to locate both decision-making and aircraft assets. This could be advantageous for Ireland in the long run.”

“Ireland is in the driving seat of the global industry,” Browne concludes. “It will be a long time before Ireland is displaced from its dominant position.”