Your robo-taxi’s outside: is the drive towards autonomous cars inevitable? 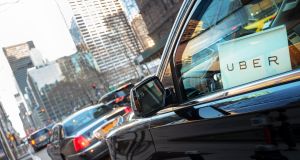 With ride-hailing companies such as Uber and Lyft investing in autonomous vehicle technology, the obvious conclusion is that they’re seeking to take human drivers out of the equation. Photograph: iStock

As we barrel, apparently unstoppably, towards an autonomous driving future, there remains a big, dark, question mark over how it’s going to affect employment. With ride-hailing companies such as Uber and Lyft investing in autonomous vehicle technology, the obvious conclusion is that they’re seeking to take human drivers out of the equation.

The technology needed to replace humans isn’t cheap, but its day-to-day costs are certainly lower, and there are none of the concerns over pesky things such as employee benefits or unionisation that such Silicon Valley start-ups seem to find so irksome.

Replace your human drivers with robots, goes the idea, and you have a round-the-clock fleet that never complains, never takes a sick day, and which certainly doesn’t have a mind of its own. Never mind the unemployment, feel the tech.

The whole equation underpinning this dream/nightmare (delete according to taste) scenario may just have been undermined. The proposition, for all its high-tech sugar-coating is, after all, purely a financial one. Make the huge investments in R&D now and get the payoff later on when you can eliminate your human wage bill.

However, a new study by the Massachusetts Institute of Technology (MIT) suggests this equation is flawed, and that the cost to the consumer of hiring and using such robo-taxis will remain significantly higher than that of owning and using their own car for some time to come.

MIT researchers Ashley Nunes and Kristen D Hernandez examined the ride-hailing and ride-sharing market in San Francisco (just over the hill from Silicon Valley itself) and have concluded that the cost-per-mile usage of a robotic taxi is likely to vary between $1.58 and $6.01 per mile. That compares to an average cost of $0.72 per mile for private car ownership. (In Europe, the average cost per kilometre, according to LeasePlan, is €0.36, which works out at about €0.59 per mile, equivalent to $0.65 per mile, which makes it an even greater potential hurdle for robotic cars.)

Nunes and Hernandez admit the study is confined to one single city, and that further research is most definitely needed, but also point out that while there has been huge interest in, and work done on, figuring out the legislative and safety aspects of autonomous cars and ride-hailing, working out the actual functioning cost basis is arguably of far greater import. After all, it’s going to come down to how much these services cost if the public at large are going to start using them.

Beyond that, there is a dichotomy of opportunity costs involved. The study makes the case that there is huge potential for a drop in local emissions both of CO2 and other pollutants by switching to robotic vehicles. Even if they’re not fully electric, ‘platooning’ such vehicles when they’re on faster-moving main roads has huge benefits. The flip-side is the potential for triggering layoffs in the taxi-driving sphere if robotic technology comes to the fore.

Responding to the survey, a spokesperson for the Irish Congress of Trade Unions (Ictu) says: “While we know that driverless cars are in development by major motor manufacturers, it may be some years before society will embrace the concept. Congress has considered the future of work and automation given rapid advances in artificial intelligence, robotics and other forms of smart technologies. If and when driverless cars or taxis become a reality, we need to ensure that workers in vulnerable sectors and occupations are not left behind.”

John Byrne, general counsel at Cartell.ie and one of the organisers of the Electronomous conference on the future of car technology, acknowledges the dangers for employment, but thinks there’s rather more hope for an autonomous future: “I think automation and ‘industry 4.0’ generally will give rise to a variety of new challenges. In the automotive world, there is no doubt automation is disruptive: the reduced number of parts required for manufacture of electric vehicles, closely tied to automation, will affect global component volumes and the anticipated decline in the numbers of professional drivers is another example of industry disruption. These jobs, over time, will evolve into other areas of the world economy.

“In the meantime, car makers will continue to develop electric vehicle technology as a pre-requisite to automation and governments must continue to facilitate coterminous improvements in infrastructure,” he adds.

The MIT study also admits it has not considered the potential for robot taxi operators to claw back profits in other areas, such as food delivery services, or in selling on-screen advertising space to those using tablets or other mobile devices while in the car. Nunes and Hernandez, though, say also that such areas of revenue generation are poorly understood and not yet anywhere near mature.

The poor performance of Uber in its initial stock offering recently may well be a warning shot to those advocating an autonomous future, one that has possibly been amplified by this MIT report. The stark facts are that even if a putative robotic taxi operator could find a way to keep their vehicles operating around the clock, with paying passengers on board for every minute of use, they’d still struggle to match the value of private car ownership.

Speaking to Automotive News, Nunes commented: “Their approach with the investment folks has been, ‘Trust us, we’ll figure this out and it’ll be this great Utopia where everyone is jumping from an Uber to a scooter to an air taxi’. The future may well be all those things. But you need to demonstrate you can offer the service at a price point that consumers are willing and able to pay. Thus far, they are unable to do so.”