There are laws in place to protect workers from unwanted verbal or physical conduct of a sexual nature. But are they being implemented in the workplace? 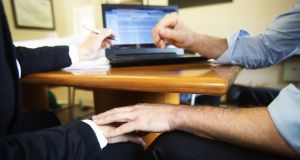 “It is essential for all employers, no matter who they are, to adopt, implement and monitor a comprehensive, effective and accessible policy on sexual harassment.” Photograph: iStock

A Workplace Equality survey recently carried out by Matrix Recruitment questioned 2,070 adults working across a broad range of industries, sectors and regions. The results showed a significant drop in the incidence of sexual harassment in the workplace, from 18 per cent in 2018 to 10 per cent in 2019.

But at a time when solicitors report a huge surge in calls relating to sexual harassment in the workplace – following Christmas parties – how does Ireland measure up to international norms and does more need to be done to weed out old habits?

We have had a number of cases where inappropriate images, discussions or crude jokes are shared on instant messaging forums or office WhatsApp groups

The Irish Human Rights and Equality Commission says sexual harassment is any form of unwanted verbal, non-verbal or physical conduct of a sexual nature that has the effect of violating a person’s dignity and creating an intimidating, hostile, degrading, humiliating or offensive environment for the person.

Currently, the laws that are in place in this area are quite broad. Emma Richmond, a partner with Whitney Moore Solicitors, says it’s up to the individual to determine what is acceptable to them.

“This could be unwanted verbal, non-verbal or physical conduct of a sexual nature. As it is the individual who determines, it is subjective and that’s where some of the issues arise – with someone saying ‘it was just a bit of fun’.”

She says while the laws are there to protect, where they fall down is around implementation.

“It’s about changing work cultures and making sure organisations have a dignity-at-work policy. But then it’s about how well it is communicated, and whether or not people are being made aware of it or are given training. We’re getting better but there is room for improvement.”

Richmond says many of the traditional complaints relate to passing comments on a person’s appearance or clothing, and while in general there is more informality in the workplace now, people can blur the lines between work and personal relationships.

“We have had a number of cases where inappropriate images, discussions or crude jokes are shared on instant messaging forums or office WhatsApp groups and in these cases just because somebody is part of it and remains silent, doesn’t mean they are not offended by it,” she says.

Quite often, the harassment does not occur in the office at all, and now with Christmas party season in full swing, Richmond says she will likely see a spike in calls in December and January. “It’s a time when employers should be on their guard, letting staff know it won’t be tolerated,” she says.

“We also see it at other times of the year – other work events such as away days or team bonding activities which will always give rise to complaints. Typically, these are designed to be more informal and a bit of fun and people can forget the context in which they are attending. The types of complaints can range from criminal offences such as sexual assault to drunken comments. Christmas can also lead to inappropriate Kris Kindle gifts,” she says.

There doesn’t need to be multiple occurrences of any type of harassment in order for someone who has experienced it to be able to take action, according to a spokesman for the Irish Human Rights and Equality Commission.

When they get a complaint they must act quickly and follow their process. Too often, employers might hope it will go away, and that doesn’t happen

“We would encourage people to come forward whenever they face discrimination. The first option for someone is to raise the issue within their organisation but following that they also have the option to make a complaint to the Workplace Relations Commission as the formal complaints body,” he says. “It is essential for all employers, no matter who they are, to adopt, implement and monitor a comprehensive, effective and accessible policy on sexual harassment, and harassment, and to ensure that this is effectively communicated to all staff,” he adds.

A lot of courage

It takes a lot of courage to call out this type of behaviour, Richmond says, and employers must educate themselves in how to respond correctly.

“When they get a complaint they must act quickly and follow their process. Too often, employers might hope it will go away, and that doesn’t happen. You have to act quickly and take it seriously.

“It’s up to the employer to create a safe space in work and they have to show they took reasonable steps to prevent any sort of harassment,” she adds.

“I would advise employers in the run-up to Christmas that they should be recirculating their dignity-at-work policy – they should be communicating that this is a work event and that people should maintain a professional boundary, especially if there is drink involved.”

While the stereotypical harassment case may have been between the senior male manager and female junior – that’s not necessarily the case now, because there is more equality. “Certainly, it can be the reverse in that it’s the female senior and male junior. That’s not beyond the realms of possibility and does occur sometimes, and men can be more reluctant to come forward,” Richmond says.

Joanne Foley, regional recruitment manager at Matrix Recruitment, who carried out the second Workplace Equality Survey in October this year, says that while it is great to see a significant drop in the number of sexual harassment cases in the workplace, the problem has not been eradicated. “There is still a long way to go,” she says.

“We know that there is a lot more awareness of the issue and the findings indicate that campaigns tackling sexual harassment may be having an impact. The #MeToo movement has reached global proportions, raising huge levels of awareness for the incidence of sexual harassment, and potentially driving behavioural change. In addition, there is widespread coverage of the issue in the media, with conversations being held daily on social media.

“We can’t say with absolute certainty that people are becoming more vocal if they are being harassed at work, but what we do know is that there is far less tolerance of inappropriate or unwanted behaviour and a lot more support for those who experience it.”

Anecdotal evidence suggests people are speaking up if they are experiencing discrimination or harassment; employers therefore need to have the correct procedures and structures in place to manage any complaints appropriately and effectively.

“Some people may feel afraid or embarrassed to make a complaint or may even think that there could be negative ramifications. But with a concerted, continuous effort from Government, employers and indeed society, we can continue to make positive strides in relation to tackling the issue of harassment,” Foley says.

The Irish Human Rights and Equality Commission has drafted a revised Code of Practice on Sexual Harassment and Harassment at Work, which when concluded will provide further practical guidance to employees, trade unions and employers in this area of continuing concern. The commission also has a dedicated ‘Your Rights’ team to take people’s calls and emails, as well as providing accessible information on its website to let people know their rights, and how to seek remedy.