Amid concerns around the climate impact of air travel, there are calls for an EU-wide tax on aviation 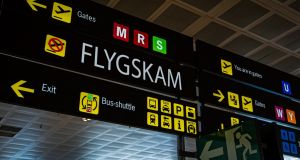 As the Swedish concept of “flygskam” (flight shame) becomes a global movement, there are calls for a co-ordinated EU discussion on aviation taxation in a bid to advance climate protection. Photograph: iStock

Aviation taxation has become a trending topic in recent months. The sector is notably privy to a number of exemptions, such the lack of excise duties and the fact that no VAT is levied on international flights. But as the Swedish concept of “flygskam” (flight shame) becomes a global movement, there are calls for a co-ordinated EU discussion on aviation taxation in a bid to advance climate protection.

According to Angela Fleming, tax partner with BDO, there is a growing sentiment that aircraft or air travel is “lightly taxed” compared to other travel industries or transport sectors. “There are also concerns around the climate impact of air travel,” she notes.

A meeting of EU finance ministers in Helsinki last summer sought to address what they say are the union’s outdated energy taxation laws. Dutch and French authorities are calling for an EU-wide discussion on the co-ordination of aviation taxation, but Irish representatives have flagged concerns in terms of travel costs and access for Irish citizens. Airlines such as Ryanair say they heavily oppose the proposed tax hike, given they are investing heavily in “greener” aircraft.

Yet it is something the Irish Government cannot ignore, admits Fleming.

“Last summer, the Department of Finance flagged in their tax strategy that there is an ongoing consideration of an EU-wide tax on aviation and Frans Timmermans, who has only just been put in charge of climate for the EU, along with nine other finance ministers in November appealed for the introduction of this tax,” she explains. “That, coupled with the fact that climate change is obviously a very hot topic on everybody’s agenda at the moment, means that the possible introduction of an aviation carbon tax is now looking more likely.”

Given that aviation currently accounts for more than 13 per cent of total greenhouse gas emissions in the EU, it’s understandably a target as the union aims to become carbon-neutral by 2025. Germany and Sweden already levy their own aviation tax, while the Netherlands is set to introduce one this year, pending the EU’s decision. Ireland previously charged an air travel tax for flights departing from Irish airports, which was stopped in April 2014.

Fleming points out that the aviation industry has been cognisant of the need to reduce carbon emissions and become more environmentally-friendly.

“We can’t disregard people’s concerns around the climate impact of air travel, they are absolutely legitimate,” she says. “However, at the same time, we have to give some recognition to the improvements that have been made in the reduction of carbon emissions of aircraft.

“Over the last 30 years, the emissions per passenger have halved and that has been achieved through a combination of investment in more carbon-efficient aircraft and also through operational efficiencies in the industry by the airlines themselves.”

Airlines will need the funds to continue this work, she adds.

“They aren’t happy to stand still, there are further ambitions to cut those emissions even more over the next 30 years. If they are going to do that, then it is going to require a substantial investment in new technology, in sustainable fuels, and also in operational improvements.

“From a business perspective, by introducing taxes that impact on the margins of airlines reduces their ability to make the necessary investments in these operational improvements but also in new technology.”

Airlines are endeavouring to replace their older, more CO2-emitting aircraft with newer, more efficient models. Any debate around introducing an EU-wide carbon tax should consider the potential negative impact on an airline’s ability to make those investments, warns Fleming.

Although the Department of Finance has said it would engage constructively with the EU proposals, Ireland would stand to suffer disproportionately if onerous aviation taxes, borne either by the airlines or the passenger, are introduced, Fleming says.

“From a purely Irish perspective, we are a small island nation, and thus heavily reliant on aviation transport,” she says. “By putting punitive passenger taxes in place, we have to think about the impact this would have on the Irish economy and in particular from an FDI perspective, as we have many multinationals based here – their ability to fly in and out of the country would be compromised. Our heavy reliance on tourism would also undoubtedly suffer.”

The theory behind introducing a carbon tax is to lower the carbon impact of air travel, but Fleming believes there are better ways of achieving this.

“The best way to do that is to look at how we can continue to fly, as this will still be necessary for social and economic reasons, but how we can do this by making air travel cleaner.