Vincent Browne: Do not worry about Gerry Adams and Sinn Féin

Harry McGee heads to Cork to catch up with Sinn Féin president Gerry Adams on the canvas. 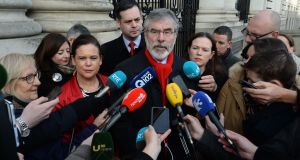 Nothing of consequence will change in Irish society with this election. Over one million people will continue to live in deprivation; nearly one in five of everyone in employment will continue to be paid pittances; thousands of poorer people will die prematurely (this was estimated a decade ago to be around 5,000 annually); us – rich people – will crash the queues for preferential healthcare, others will be left on trollies and waiting lists; schools will make no significant difference to the life chances of children and young adults; only the few will exert any influence on public policy; our democracy will remain hollow.

Fine Gael will be the lead party of government again, supported by “like-minded” Independents, “like-minded’ Labour (if there are any left) or “like-minded” Fianna Fail.

Almost none of the major issues featured at all in the election campaign, guaranteeing little will change. Instead we had endless discussions about the composition of the next government – as though it matters; the culpability of Fianna Fail for the 2008 crash, as though Fine Gael and Labour were not themselves complicit in that crash; the alarms about Gerry Adams and Sinn Féin, always missing the central point concerning Sinn Féin.

And while we’re mentioning Sinn Féin … The reflexive air-headed hysteria of Independent Newspapers about Sinn Féin and Gerry Adams has been predicable. We all know Gerry Adams was one of the leading figures in the IRA for a long time and it is no surprise he denies that, for to do otherwise would leave him open to criminal prosecution and, probably, civil suits.

We also all know of the complicity of Gerry Adams in legions of IRA atrocities, atrocities that probably would have happened anyway, with or without him.

But it was Gerry Adams, who, more than any other single person, was responsible for delivering the most significant political achievement of Irish history for generations: the peace agreement on Northern Ireland. In terms of achievement, no other figure in Irish public life rates even close to him.

But there is reason to be suspicious of Sinn Féin, a reason that, incidentally, should be comforting to the vested interests Independent Newspapers seek to represent.

There was a period in the late 1970s and early 1980s when Sinn Féin and the IRA flirted with radical change. Following James Connolly they wrote (in Éire Nua, 1979): “We believe that the present system of society is based upon the robbery of the working class and that capitalist property cannot exist without the plundering of labour; we desire to see capitalism abolished and a democratic system of common or public ownership erected in its stead. This democratic system, which is called socialism, will, we believe, come as a result of the continuous increase of power to the working class. Only by this means can we secure the abolition of destitution and all the misery, crime and immorality, which flow from that unnecessary evil”.

Now all they venture is to increase the minimum wage to €9.65 an hour. There is some decent analysis of social conditions in the Sinn Féin manifesto, but the thrust of the manifesto is so cautious and “responsible” one wonders why they don’t they just merge with Fine Gael, along with the Labour Party, Fianna Fáil, Renua and Shane Ross?

Establishment politics has moved significantly to the right of right of centre. Fine Gael is now far more a fundamentalist Tory party than it has been since its dalliance with fascism in the 1930s. The undercurrent of its slogan “make work pay” is to cut taxes, whatever the social consequences – the more inequality the better.

It will be as well if Labour is extinguished on Friday because it would end the delusion that Labour will make any change worth noting to the status quo. In all the eight coalition governments in which Labour has participated, the people whose interests Labour purports to serve, were betrayed.

The worst of these coalitions has been this tea-party government, which has enforced the cruellest cuts on the lifestyles of the disadvantaged, the most egregious being the 80 per cent in the funding of Traveller programmes, the cuts to respite care, to special needs teaching, to the funding of programmes supporting victims of rape, the cuts in lone parent allowances. All while protecting the tax havens and, latterly, further enriching the rich.

Neither has the Left distinguished itself, although the predicted increased support for Left candidates of course is welcome from an egalitarian perspective.

The campaigns against property tax and water charges have been opportunist and self-defeating. Of course the property tax and water charges were unfair as configured. But the vibe emitted by the Left that taxation is an evil is itself evil. Taxation is the means not just whereby the essential agencies of the State is funded but how the grossly unfair market distribution of income and wealth is corrected.

All income and wealth is generated by social co-operation and is therefore the property of society, not the property of those who claim to have “earned” it or, worse, inherited it. The Left seems afraid to affirm this.

Yes it has been entertaining to watch how Fine Gael banjaxed its campaign. Less entertaining has been how the media, which to a large extent sets the agenda, again, has done so to the tune of the well-heeled and the corporate studded boots.

1 Ireland among countries urged to consider reinstating Covid-19 restrictions
2 Lowest numbers in two weeks as one more Covid-19 related death and 35 new cases reported
3 Minister promises Leaving Cert students exams will assessed fairly
4 ‘I’ve been sleeping with my girlfriend’s sister. I need help. What do I do?’
5 Ward at Naas General Hospital closed due to suspected Covid-19 outbreak
Real news has value SUBSCRIBE