Our national psyche was on parade on St Patrick’s Day 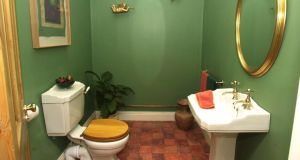 In the view of the city-dweller, making the humble toilet the unit on which the property is calculated – as it were – makes more sense than going on property websites whose valuations can vary.

In the country, they are pointing out the potholes, the fact that the local hospital was closed some years ago, and their septic tanks. The property tax serves city-dwellers right, they think, for having extravagant luxuries like public transport, and pesky city ways. In the view of the city-dweller, making the humble toilet the unit on which the property is calculated – as it were – makes more sense than going on property websites whose valuations can vary from the Revenue calculator’s estimates by a factor of three, in the case of one house (mine). It also makes more sense than handing auctioneers – whose forecasting skills did not emerge so terribly well from our national bankruptcy experience – another excuse to be paid good money to come around and stand outside your back door to reveal the shocking news that your garden does not face south.


South-facing scenarios
Yes, it is a bad sign in Ireland when the old dogma of the south-facing garden is revived, as it was last week, and begins to stalk the land once more. Minister for Social Protection Joan Burton is going to investigate the psychological consequences of our mortgage arrears crisis, and this is probably a good thing. But how much more does she need to find out? In an editorial yesterday the Sunday Independent summed up the Irish psyche rather brilliantly: “. . .Some might argue that mercurial is too soft a term. The Irish psyche is instead of the bi-polar variety, where brief episodes of mad elation are followed by lengthy Scandinavian dark nights of the soul.”


Public psyche on parade
The elation – it is not always mad – is wonderful when it comes. RTÉ’s round-up of St Patrick’s Day parades from across the country made one feel a lot better. From the 285 St Patricks in Limerick, where they were trying to set a world record, to what was described as the Longford branch of the Lesbian, Gay, Bisexual and Transgender group being part of a march through the town, to Bailieborough having someone dressed as Ming Flanagan TD with a “No Penalty Points Here” sign on his back – it was cheering. In Ballingeary, in the Cork Gaeltacht, they had Lance Armstrong doping himself, Katie Taylor (depicted by a man) and a fully blacked-up Usain Bolt.

In Kilkenny they had a reenactment of the ambush that killed Michael Collins, although it wasn’t exactly clear why. And everywhere was what RTÉ’s Paschal Sheehy identified as the holy trinity of Irish life – St Patrick, the pope and Elvis. Along with the Polish School of Irish Dancing (Galway) there was also the Swords cricket club and, in a surprising number of parades, the Stig from the BBC’s Top Gear .

Surely there is enough here to keep a researcher into the national psyche going for some time. For the television viewer at least there was no visible protest against the property tax during the round-up of parades, which depicted so much that is part of daily life. It is hard to believe that the local parades don’t do satire or protest, although it has been some years since a local parade depicted a banker being arrested – didn’t that happen in Achill?

Meanwhile, back in the lengthy- Scandinavian- dark- nights- of- the -soul department, Ms Burton must already know the Irish are not rational about property – that in fact it is one of our stronger narcotics. And because we are so angry with politicians the section of the population that would always have been reluctant about property tax is downright hostile, with occasional bursts of hysteria.


‘Leave us alone’
On Friday’s Liveline radio programme, a man suggested some TDs come and live on social welfare in apartments in Longford town. The caller predicted the public representatives would be dead of starvation within three days. He did not seem overly upset at the prospect. The real hurt and hardship of a lot of the mortgage-arrears cases has been seamlessly folded into the old “Leave us alone” attitude which we bear towards any government initiative that inconveniences us.

The majority of us who will surely pay our property tax are strangely silent. It’s as if the only acceptable response to the property tax is an unprocessed anger, so irrational it can hardly be explained, let alone acted upon. We don’t like our politicians – with good reason, much of the time. But we make their job easy with our sulking and our localism and our inchoate rage. The truth is Ireland is easy to govern – in fact a doddle – and always has been.

1 Why Sinn Féin will not call the State by its name
2 Bank leaked my loan request to family who tried to rip me off
3 A cardiac problem that could strike at any time
4 Coronavirus: Questions over Ireland’s readiness for what might come
5 Dan Tuohy explains ‘rotten to the core’ comments
Real news has value SUBSCRIBE