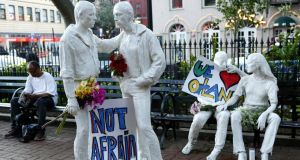 At the New York pride march in June, 49 members of Gays Against Guns dressed in white to represent the lives lost in the Orlando nightclub massacre. Photograph: Monika Graff/Getty Images

The LGBT community centre in Greenwich Village in Manhattan is, as you’d expect, bustling. Christopher Street, birthplace of the gay-rights movement, is a few blocks to the south. In June, a block of the street where the Stonewall Inn is located was declared a national monument, the first dedicated to LGBT history. The community centre building is slick, marked with patches of the past. One meeting room used to be the men’s toilets, the interior preserved, the marks from where the urinals were taken off the walls still visible, a tiled floor, and a mural by Keith Haring wrapped around the upper half of the room.

Every other week, a relatively new group called GAG meets at the centre. Gays Against Guns formed in the aftermath of the Orlando Pulse nightclub massacre in June, when 49 people were shot dead in the worst mass shooting in modern American history. On Thursday, the gates around that Florida nightclub opened for the first time since the massacre, for the unveiling of a new mural.

Agitating for change through protest, direct action and boycotts are integral to LGBT activism, but can “the gays” really take on the might of the American gun lobby? Well, they are certainly going for it. Many of those involved in GAG are veterans of LGBT direct action activism, notably with Act Up (Aids Coalition to Unleash Power), a group that formed in 1987 and held direct actions protesting against the apathy towards an Aids crisis that was killing thousands. Others were involved in the marriage equality movement. Now they’re turning their attention to gun violence.

GAG co-founder Kevin Herzog says the group was established because “we were horrified and astonished when the whole thing [the Orlando shootings ] went down”. The group holds actions targeting financial institutions that are in cahoots with gun manufacturers, and are also naming, shaming and protesting against politicians who benefit from the support of the National Rifle Association (NRA).

“There is this very obvious what we call ‘chain of death’, a chain that starts with the investment banking companies who either own or own large parts of the gun manufacturers, companies who produce weapons with only profit in mind,” said Herzog. “Then from the NRA – which is funded predominantly by gun manufacturers and wealthy individuals who have a financial interest in gun manufacturers performing – to the politicians.”

The Orlando massacre happened less that two weeks before the pride march in New York. Another GAG member, Irish filmmaker Paul Rowley, who lives in Brooklyn, remembers the feeling of the newly formed group marching down Fifth Avenue, with people lining the streets, crying.

“It was so incredibly powerful,” said Rowley, adding that 49 members of GAG dressed in white to represent the lives lost in Orlando. They were led by a giant disco ball – “To see the way that GAG were presenting and honouring the people whose lives have been lost. I was totally sobbing from behind the camera.”

Along the way, they held “die-ins” at various points, a classic Act Up echo. Nearly 1,000 people marched with GAG at the pride march, and were on the front of the New York Times the following day.

John Grauwiler, another co-founder of GAG and a teacher at a public school, moved to the East Village in Manhattan in 1989 and joined Act Up. He is now using that experience to agitate against gun violence.

Direction action, he says, “has always pushed the cultural needle in the way lobbying cannot and will never do”. “Getting out into the street, creating a ruckus: that stuff works. It has always worked. The outrage and the anger becomes transparent, as opposed to the back-door negotiations, the quid pro quo.

“There is no quid pro quo in activism: there are demands, because we recognise the other systems aren’t working. We have a history of doing this: fighting the government during the Aids crisis, going to the supreme court to reimagine the constitution for our rights.”

The LGBT community is uniquely positioned to try to effect change on gun violence because of the massive experience many people have in non-violent protest, activism and direct action, and the sense that they can “get away with” more than other more (rightly) po-faced groups can. Rowley talks about the “smart, super-creative direct-action approach, which complements well what the other anti-gun violence groups are doing. But we also bring something unique, eye-catching, thought-provoking.”

You get the sense that GAG is what happens when a community suffers a devastating blow, but also when a community has attained a certain amount of privilege – as the LGBT community in the US has – and is looking to other causes to act as an advocate, for the sake of the public good.

In a news-heavy year, the Orlando massacre disappeared from the news cycle months ago, yet its impact is still felt in the American LGBT community, which is always at risk of violence, particularly violence committed against trans women of colour.

But as sad as the context for GAG’s formation is, there’s something heartening about the vibrancy of Act Up being reinvigorated today, and something very interesting in seeing this mammoth issue being tackled. GAG might answer the question of where the energy and purpose of LGBT activism will be directed to when certain rights and privileges are achieved. The answer to that, when it comes to combating gun violence, is quite simply: everywhere.