Una Mullally: Back to school and back to the problem of religious patronage 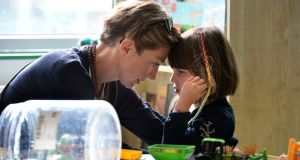 Tosia Wojcik with her mother Magda, on her first day at school in Powerstown Educate Together National School. Photograph: Dara Mac Dónaill / The Irish Times

It’s back to school week. Social media is full of kids looking adorable in their uniforms off to school for the first time. Books have been covered, lunches have been packed, and the baptism has been signed, sealed, and delivered, confirming school admission.

We all know parents who have effectively no relationship with the Catholic Church who planned far ahead and got their pals to renounce the devil on their baby’s behalf, to make sure they got into the local school. Plenty of people do this with the intention of bringing their child up Catholic. Plenty do it because they have to.

That has to end. It’s unfair, it’s disingenuous, and it’s not the parents’ fault either, because many feel like they have no other option. They just want what’s right for their child in terms of their education. But meanwhile, the Catholic Church maintains control over that education, and continues to process baptisms that have less to do with actual faith, and more to do with ticking a box for a local school’s admission policy.

We need to end this pretence, and start building an education system that is fair, open, and that reflects Ireland. There are several issues at play here. The first is that discrimination in school admissions should be a thing of the past. No child should be denied entry to a school on the basis of their religion (or supposed religion).

The second is the merit of holding religion classes during school hours, when they could be very easily moved to a time outside of curriculum hours. According to a poll by the Irish Primary Principals Network (IPPN), which surveyed 600 principals on the subject, eight out of ten primary school principals believed that less time should be spent teaching religion in the classroom.

If a parent wants to send their child to a faith school, then that’s their prerogative, and it should be accommodated, but pretending that a Catholic school is a choice for most people is disingenuous. Most of the time it’s the only option.

Pretending that choosing non-faith or multi-denominational schools is a realistic choice for parents is also disingenuous, considering they are so few in number. Ninety per cent of primary schools are controlled by the Catholic Church, and six per cent are controlled by Protestant churches. That’s not a choice, that’s a monopoly.

There is of course a greater, slightly more abstract issue, but one which has very real consequences. Children who do not have a relationship with the Catholic Church have a right to be free from indoctrination within the education system, as do their parents.

This indoctrination can go unnoticed by many people, but many more will spend years unpacking the impact of religious indoctrination, particularly if you are a person whom the Catholic Church does not look favourably upon, such as an LGBT child. The Church’s teaching on sex and relationships, reproductive rights, and its anti-LGBT stance is damaging and hurtful for many young people.

Our most recent three Ministers for Education have been working on this issue, beginning with Ruairi Quinn’s substantial appetite for tackling the re-patronage of schools, followed by Jan O’Sullivan abolishing Rule 68 which gave a privileged status to religion classes at primary level, followed now by Richard Bruton’s plan to increase the number of multi-denominational schools to 400 within the next 15 years. The intention is to meet this target with a combination of opening new schools, and divesting religious control of existing ones faster.

There are several organisations working well in this field right now, including Atheist Ireland’s Teach Don’t Preach campaign, the great work Educate Together has been doing, the newer Equate organisation, and others. Equate is headed up by Michael Baron, who has done phenomenal work for Ireland’s young people in his previous role with the LGBT youth organisation BeLonGTo. This is an area that is finally and rightly being framed as education equality, by working towards an education system that is inclusive of diversity, and that serves all of the children in Ireland and their parents or guardians properly.

Religious organisations have been slow to give up control of schools, and the reasons for that are obvious. Education, and controlling that education, is power. It’s power in numbers, and power in thought. But if religious organisations really value truth, then why are priests so willing to baptise children whose parents have little to no relationship with the Catholic Church, and who are using baptism as a school-entry tool?

We need proper opt-out options for religion classes, and for schools to provide alternatives to those classes regarding children of minority faiths or children from non-faith backgrounds. We need to increase multi-denominational and non-denominational schools. We need to eliminate discrimination in school admissions.

Plenty of Catholics and Protestants send their children to non-denominational and multi-denominational schools, and that is their right. But when the choice isn’t there for those who want to access those schools, we’re backing parents into a corner, and forcing their hand to commit their children to the Catholic Church in particular. That’s not fair on any of the parties involved; the religion, the parents, and the child. Being a lifelong member of a religion is a serious decision, it’s not something the Church should be happy to have happen just so a kid can get into a school, and it’s not something a parent should have to do for their child to access education just because their choice of schools is limited to ones religious organisations control.

Although the education of children can be an emotive issue, this doesn’t need to be an ‘us versus them’ scenario. Church leaders and religious organisations need to be brought on board - and need to properly bring themselves on board - to allow for progress in an education system that reflects 21st century Ireland.

Let religious organisations have their schools, and let those who want other schools be able to have theirs.