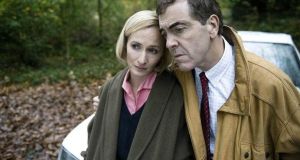 James Nesbitt as a convincingly sinister Howell, and Genevieve O’Reilly as the passive yet quietly duplicitous Hazel in the dramatisation of the 1991 murders of Lesley Howell and Trevor Buchanan in Coleraine, Co Derry.

Who has the right to tell the stories of our lives? When does a deeply personal narrative of violence, grief and loss become public property?

These are the difficult questions raised by ‘The Secret’, ITV’s controversial dramatisation of the 1991 murders of Lesley Howell and Trevor Buchanan in Coleraine, Co Derry. The four part series, which concludes on Friday night, showed how Colin Howell, a Christian dentist, and his lover, Sunday-school teacher Hazel Buchanan, conspired together to kill their spouses and make it look like a suicide pact.

Based on journalist Deric Henderson’s account of the scandal, the drama traced every lurid aspect: the carbon monoxide poisoning of Lesley and Trevor, using a hose attached to a car exhaust with a baby bottle; Colin Howell’s psychotic belief that his actions were divinely pre-ordained, and thus justifiable; the weird sexual encounters between the lovers, Hazel lying drugged in Howell’s dentist chair, seeking release from her guilty conscience. With James Nesbitt as a convincingly sinister Howell, and Genevieve O’Reilly as the passive yet quietly duplicitous Hazel, ‘The Secret’ was both disturbing and compelling to watch.

For the people directly affected by the murders, however, it was grotesquely painful. Lesley and Colin Howell’s daughter, Lauren Bradford, described how the show had re-awakened her original trauma.”What it comes down to is the powerlessness of families in this situation to have any sort of control over events that shape their lives,” she wrote in the Guardian newspaper. “The culture we live in and its fascination with crime means that someone can write a book or film a drama to make money from someone else’s life and be applauded for it.” Bradford’s MP, Louise Haigh, raised the issue at Westminster, arguing that ITV may have breached the Broadcasting Code. Ann Travers, the sister of an IRA murder victim, said that dramatising the deaths was “the wrong thing to do”.

One must have enormous sympathy for Bradford and her siblings, as well as the adult Buchanan children. They grew up in the shadow of an assumed suicide by a parent, then discovered the still more terrible reality. The murders themselves may have happened 25 years ago, but Howell did not confess until 2009, and the criminal verdicts came in 2010 and 2011. Scarcely enough time to begin processing the overwhelming tumult of emotions, let alone to tolerate the forced conversion of such raw personal pain into Friday night entertainment for the masses. Are we morally complicit in their anguish, simply by the act of watching television?

And then there is the question of truth. Observant viewers will have noticed that the opening titles of ‘The Secret’ describe it as “a true story”. How true can a dramatic account of real events be? There will always be narrative short-cuts, flourishes, elisions, omissions. Lauren Bradford resented the portrait of her mother Lesley, who emerged as a depressed drinker, huddled under a duvet, not the warm, wickedly humorous woman whom Bradford remembered.

Yet once a story is in the public domain, it ceases to be the private concern of the victims, and they cannot retain ownership or control of it. The details of this case were minutely documented in court and reported widely in the media, well before the emergence of Henderson’s book or this recent adaptation. It is far too late to hush it all up. The facts no longer belong to the victims; distasteful as they are, they belong to all of us.

Of course, ‘The Secret’ is not unique; rather, it is only one of a vast number of film and TV dramatisations based on real-life tragedies. The people affected may well feel aggrieved, disturbed or even re-traumatised by these programmes. This is highly regrettable. But should we then grant victims the complete power of veto, allowing those who are directly implicated to decide which stories the public may or may not hear? Such a move would be a form of compassionate censorship, motivated by concern for the wounded and bereaved, but it would be censorship nonetheless. And that is very rarely the right way to go.

It may be difficult, even impossible, for those affected by the Coleraine murders to see anything good in ‘The Secret’. But by engaging us imaginatively, this well-told drama actually increases our empathy for the victims. It reminds us that Lesley Howell and Trevor Buchanan were not just a pair of bodies dumped in a gas-filled car, but real human beings whose lives were brutally extinguished by a man who thought he could play God.