‘The scandal of Nauru is not new, but the sheer enormity of the files released this week by the Guardian newspaper is horrifying’ 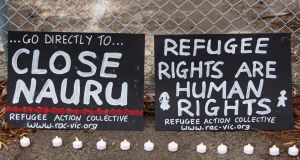 A candlelight vigil earlier this year in which protesters stood in solidarity with refugees in detention in Melbourne, Australia. Many refugees inside the Immigration Detention Centre were due to be sent to Nauru or Manus Island. Photograph: Asanka Brendon Ratnayake/Anadolu Agency/Getty Images

The Black Armband has come back to haunt Australia. Twenty years after conservative prime minister John Howard brushed off national guilt about mistreatment of Indigenous people, new allegations this week have emerged of cruel and unusual sufferings of asylum seekers whom Australia had dumped on the Pacific island of Nauru. The appalling conditions imposed on people – especially children – has angered and ashamed many Australians.

While western Europe this summer saw queues of refugees at the borders of the EU, and has become hardened to mass drownings after perilous sea journeys, Australia has long adopted a bi-partisan attitude of zero tolerance to its refugee problem.

The scandal of Nauru is not new, but the sheer enormity of the files released this week bywhen the alleged sexual violence, self-harm, assaults, and hunger strikes were reported. But you had to be pretty dogged to find out about this back in Australia. The government of Tony Abbott made it virtually impossible for independent reporting from Nauru.

When Abbott was “rolled” and replaced by Malcolm Turnbull a year ago, nothing changed, despite the new prime minister’s vaunted more liberal tendencies.

Media organisations were told by Nauru officials (read Australian officials) that each journalist had to pay A$8,000 (€5,500) for a visa. Some were told no visas would be issued for journalists. “It’s become an out-of-sight, out-of-mind policy,” Melissa Phillips, a migration researcher at Melbourne University, told human rights website IRIN.

Former judge of the Court of Appeal in New South Wales Stephen Charles was more blunt: “Australia’s policy towards asylum seekers is one of deliberate and calculated barbaric cruelty.”

The United Nations High Commissioner for Refugees has repeatedly told Canberra it is flouting obligations under the 1951 convention, to which Australia is a signatory. The response was a full-scale military-led operation to turn back refugee boats at sea, so the passengers never even manage to make footfall on Australian soil.

When Mr Howard made his “black armband” comment, very deliberately, back in 1996, he also had this to say: “I believe that the balance sheet of our history is one of heroic achievement and that we have achieved much more as a nation of which we can be proud of than which we should be ashamed.”

What has happened on Nauru has no place on a balance sheet of any sort. It’s a human tragedy and a disgrace. Angela Long is an Australian, a journalist based in Dublin, and former director of the Irish Refugee Information Service

1 Coronavirus: No further deaths and 57 confirmed cases reported in State
2 O’Doherty ‘trying to evade’ service of defamation proceedings, court hears
3 ‘No demand... because there are no people’ at well-known Dublin pub
4 When will the first Covid-19 vaccine be used in Ireland?
5 Coronavirus: Three children test positive at creche in Co Meath
Real news has value SUBSCRIBE