The female body can be a weapon rather than a battleground 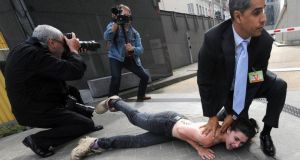 A Femen activist is detained by a security man after staging a protest during a visit by Tunisian prime minister Ali Larayedh near the European Commission in Brussels last month. Photograph: Reuters/Laurent Dubrule

In Ireland the female body is a battleground. Perhaps, as we saw in the Dáil shenanigans last week, providing an opportunity for politicians – not least female politicians – to do a bit of grandstanding, on it and in it, in a most distasteful way. Last week also came more reports of rape and sexual assault on female protestors in Tahrir Square in Cairo. These assaults are perpetrated by the women’s fellow citizens, who do not approve of them appearing in public.

But let us not despair: in other parts of the world that are more developed than Ireland and Egypt the female body is viewed neither as a minefield nor as public property, but rather as a powerful weapon of protest and of fun.

Take Amanda Palmer, for example. The performance of her song Dear Daily Mail went viral (translation: hugely popular) on Friday of last week. Amanda Palmer was understandably put out that the Daily Mail’s coverage of her appearance at the Glastonbury rock festival made no reference to her act, or to how she sang, but instead focussed on the fact that her breast had “escaped” from her clothing. “Like a thief in the night”, she sang indignantly.

Her song is quite funny. Older viewers of it will find her lone voice, clever lyrics and keyboard playing reminiscent of Dilly Keane, to whom God be good. Still older viewers will find Amanda Palmer – or her performance of Dear Daily Mail at any rate – reminiscent of Flanders and Swann. Can that be a bad thing?

Disturbing
It is her material that’s different – or perhaps not that different, particularly to Keane’s work. Keane could have written Dear Daily Mail, but she could not have sung it like this. The song is a well-aimed attack on a newspaper that has made a fetish out of normal female biology, picking over women’s bodies in a forensic way that is quite disturbing and completely addictive. “I’m tired of baby bumps . . .” sings Amanda Palmer, as she lists the female imperfections the Daily Mail has kindly homed in on, magnified and surrounded with helpful circles in order that we, the huddled masses, don’t miss a single flaw.

Of course, the Daily Mail is not alone in this, and women readers drive this market. Women have to face up to the fact that there is something pathological about our incessant competition, and relentless calibration of female beauty. But the thing is that no one expects the victims of this nasty monitoring to strike back. And strike back Amanda Palmer certainly has, by exposing her body shamelessly in a protest against it being spied on and snickered about.

It’s strange that the naked and un-Photoshopped female body still has such an impact on us in this day and age. As an instrument of protest it is pretty much unanswerable in a world where the naked female is used so much. And still two members of Pussy Riot are in jail in Russia.

Only yesterday Camilla Long in the Sunday Times was talking about how tiny fashion models who are unfortunate enough to have even a suspicion of a bust line are not allowed to squeeze into the vicious corsets used to underpin the couture gowns at the big fashion houses. How the flip are we to explain this madness to young girls?

The impact of the female body when it’s used as protest must come at least from the sheer fact that it’s novel to see it moving, unencumbered, and just doing ordinary things (no, not that ordinary thing). In this era of pornography it seems peculiar that the most shocking act healthy young women can perpetrate is to take off their clothes for the television cameras, but it is nevertheless true.

Femen
And this brings us to the feminist protest group, Femen. Three of them were carried out of a Swedish mosque earlier this month. They were bare-breasted, with slogans written on their torsos, and they were protesting about the application of Sharia law and the treatment of women in some Muslim countries. Although, as one of them pointed out, Femen is against all theocracies.

Another of the protestors, Alia Amagda Elmaddy, who has an Egyptian background, said that Femen appreciated the fact that it was allowed to protest in Sweden, whereas in Egypt they would have been raped and cut with knives.

Eventually, when the three protestors were dressed, they were interviewed by a female reporter, and helpfully pulled their shirts up so everyone could have a good look at their slogans. By inviting the public gaze they silence us, the onlookers, and we are left aghast at their courage.

The power of women voluntarily exposing their bodies to the public gaze – and themselves to verbal abuse (what was said to the Femen protestors in that Swedish mosque was predictable and not pretty) – is amazingly fresh.

These young women are extremely brave and dumbfound their opponents. It is interesting for Irish women to wonder why there has not been this sort of protest here – our convent shame might not allow it for decades. But when the time comes we should be ready to hold the coats.