That beats Banagher – An Irishman’s Diary on catchphrases and towns 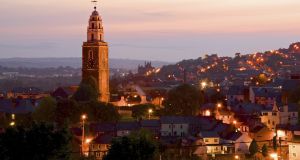 In days gone by, the mention of the city might trigger ‘Cork’s own town and the divil’s own people’

‘That beats Banagher and Banagher beats the band” is one of the most distinctive catchphrases linked to any Irish town. And to this day it lives on in the eponymously named That Beats Banagher Festival.

Many of these colourful sayings have been lost with the passage of the years, but some are triggered at the mention of the town or village in question. A whistlestop tour of the country – by no means exhaustive – shows a broad geographical spread.

In south Donegal, Ballyshannon has given rise to an expression based on its being divided by the river Erne. Two farmers, haggling over the price of an animal, would invariably declare “We’ll make a Ballyshannon of it”, meaning they are splitting the difference. Not far away, if you are told, in an exclamatory fashion “Get away to Pettigo!” then the chances are that someone does not believe what you are saying and they are banishing you to that self-same town. A variation on this theme, with a meaning coined in the 1650s, applies to a Wexford village, “Go to Ballyhack”.

A Tyroneism that still trips off the tongue, “Come in, Dungannon, I know your knock”, is a response by those inside to a visitor knocking at the door. In the southern part of the county, if something is “All to one side”, then a local town may be invoked in the parlance “All to one side like Clogher”, because the businesses are all ranged on one side of the street.

Across the Sperrins, the south Derry town of Swatragh has the dubious distinction of having the word “fever” attached to it. If someone is suffering “Swatragh fever”, he, or she, might in truth, not be all that unwell. A vivid cry, rarely heard today “God never comes near Derry”, is attributed to a character from Patrick MacGill’s book The Rat Pit, about the seasonal workers from Donegal making their way from the port of Derry to Scotland; these days, the soubriquet “Maiden City”, or the celebrated “Stroke City”, are more likely to be heard.

Many slogans have their origins in literature, song, or 19th-century doggerel. Several have been penned in verse or in a couplet such as “From Carrickmacross to Crossmaglen, you’ll find more rogues than honest men”. Munster market towns, especially in the Golden Vale, enjoy an entire stanza:

“Newcastle West for all that’s best

Abbeyfeale for flour and meal,

And Doneraile for asses.”

Friendly inter-town rivalry plays a part too. For example, a man from Nenagh in Tipperary may have quipped “You’ll get nothing for nothing in Borrisokane”, provoking the Borris man’s rejoinder “Go to Nenagh and you’ll get the same”. Other towns, at opposite ends of the country, lead to questions. A Kerryman might say “Yerra, were you ever in Sneem of a Tuesday?”, while in Antrim you may hear it prosaically asked “Were you ever in Larne?”

In 1891, when Parnell spoke in the Kerry village Knocknagashel, a banner reflected the intense local pride, “Arise Knocknagashel, and take your place among the nations of the earth”. Cork has attracted a particular preponderance of placename phrases. In days gone by, the mention of the city might trigger “Cork’s own town and the divil’s own people”. The county’s smaller towns too have not escaped attention:

“Skibbereen where the grass is green,

Macroom that never reared a fool,

Ballyvourney where they milk the geese

And Bandon where even the pigs are Protestants.”

One of the most despairing of all expressions is attached to a west Cork town, stemming from the suffering during the Famine, “Clonakilty, God help us”. Not far away in Leap, the 400-year-old appellation “Beyond Leap, beyond the law” refers to a legendary character named O’Donovan, and a leap that he performed on a horse across a narrow gorge while being chased by an English contingent. It may not be much in use today, but years ago, if you visited Carrigtwohill, an east Cork village with a reputation for quick thinking, you would have heard the saying “You can walk around Ireland – but you must run through Carrigtwohill”.

One of the best known of all, “Beef to the heels like a Mullingar heifer”, derived from a popular ballad and an epithet unflatteringly applied to women. Elsewhere in the midlands, in the Roscommon of the 1940s, when the Boyle Froth Blowers’ Association protested about the price of a pint of porter being increased from sevenpence to eightpence, they adopted a colloquialism which survives to this day, “I’d rather be boiled in oil than oiled in Boyle”.

1 Taoiseach has confirmed schools will reopen at the end of August
2 We need to pay very close attention to what is happening in Britain now
3 The strain is starting to tell on Brendan O’Connor
4 Michael Smurfit: ‘I asked Trump to invite me to the White House for my 80th birthday’
5 Boris Johnson had little choice but to back Dominic Cummings
Real news has value SUBSCRIBE